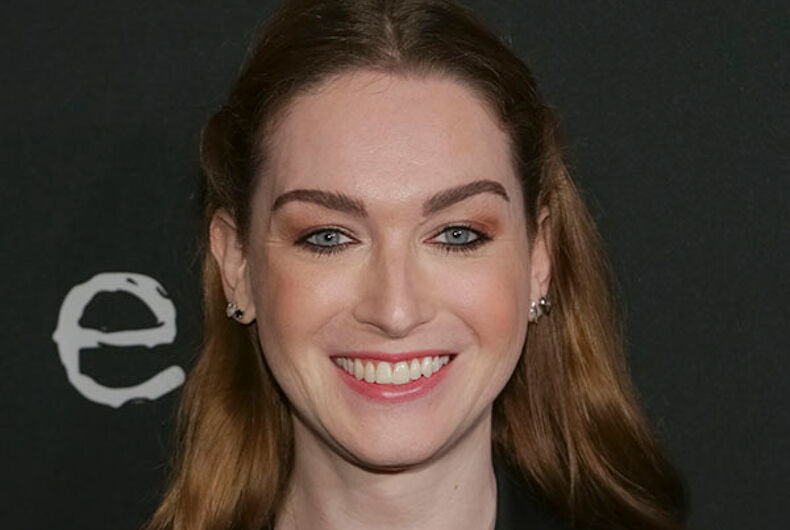 Transgender actress Jamie Clayton has been cast as the iconic villain Pinhead in the latest Hellraiser film. She will be both the first woman and first trans person to take on the role.

Clayton, 43, is known for playing Tess on Showtime’s The L Word: Generation Q, as well as Nomi on Netflix’s Sense8.

Related: ‘L Word: Generation Q’ has cast two transgender actresses, but how will it handle them?

In Hellraiser, she will take on Pinhead’s devilish persona as leader of the Cenobites, a group of demonic beings who live in another dimension and are released into the human world through a puzzle box.

When news broke of Clayton’s role, she posted a photo of herself to social media with the puzzle box in hand.

She wrote, “Demons to some. Angels to others,” a quote from the original Hellraiser film, released in 1987.

Demons to some. Angels to others. @hulu #Hellraiser https://t.co/Tvhuo7P7Vn pic.twitter.com/Fj228ZPugt

There have been a total of 10 movies in the Hellraiser franchise spanning from 1987 to 2008. Pinhead has previously been played by Doug Bradley, Stephan Smith Collins, and Paul T. Taylor. Pinhead was also turned into a Marvel Comics character.

The original Hellraiser was based on a novella by Clive Barker called The Hellbound Heart. Barker then transformed it into the first film, which he wrote and directed.

The film has also been repeatedly touted as a queer classic.

Barker has not had the rights to Hellraiser in decades, but he won them back in a recent lawsuit. As of December 19th, 2021, the American rights will be his again, according to the Hollywood Reporter.

Barker is also a producer of the new film, which has already finished production and will be released sometime in 2022.

“Having seen some of the designs from David Bruckner’s new Hellraiser film, they pay homage to what the first film created, but then take it to places it’s never been before,” Barker said in a statement. “This is a Hellraiser on a scale that I simply didn’t expect. David and his team are steeped in the story’s mythology, but what excites me is their desire to honor the original even as they revolutionize it for a new generation.”

Fans of Clayton celebrated the announcement of her role on Twitter.

“Casting Jamie Clayton as the new Pinhead in the reboot of Hellraiser is a stroke of absolute genius,” one user wrote.

“Reboots normally annoy me,” wrote another, “but casting Jamie Clayton makes so much sense for the character and I’m so here for it. It doesn’t hurt that she’s also a badass actor.”

Ok waking up to heteros being upseteros about Pinhead and then finding out that it's because Jamie Clayton is playing Pinhead!!!!!!!!!!!!! pic.twitter.com/6cwTMiAo4B

Casting Jamie Clayton as the new Pinhead in the reboot of Hellraiser is a stroke of absolute genius. pic.twitter.com/wqXFj3WmU6

This is so exciting! Reboots normally annoy me, but casting Jamie Clayton makes so much sense for the character and I’m so here for it. It doesn’t hurt that she’s also a badass actor. 😍 https://t.co/zvOmsty71a

Six years ago I wrote an article about the horrors of trans misrepresentation and ended the piece by pitching Jamie Clayton as a final girl.

THIS IS WAY FUCKING BETTER!!! https://t.co/hYxL2BLwUw