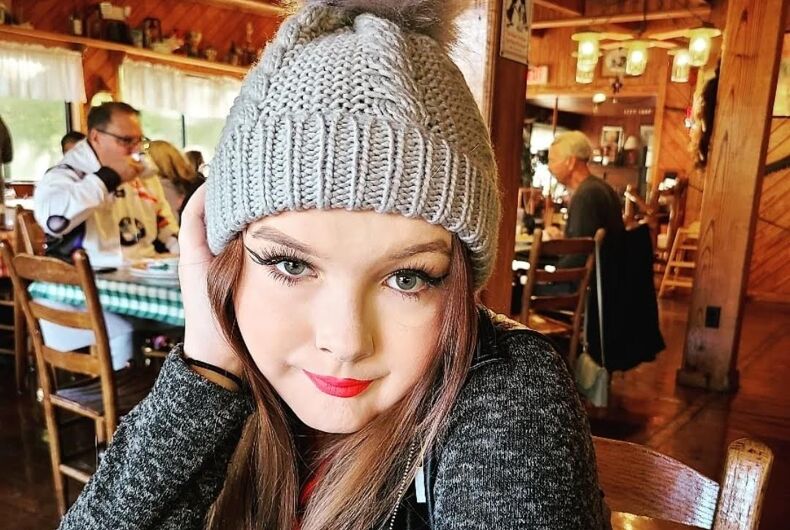 Alabama native Jeff Walker gets emotional when he talks about his 15-year-old trans daughter, Harleigh. “It brings me to tears that someone so young has had to reach inside themselves and do the things she has had to do.”

So far in her life, Harleigh has endured bullying from classmates, contempt from school administrators, and “personal attacks by those who would threaten her existence. I cannot imagine at 15 years old being that courageous in the face of bigotry, hatred, and discrimination,” her dad says.

With the support of family and a close group of friends and allies, Harleigh not only endured the attacks but overcame them to become the public face of the fight for transgender rights in her home state, advocating for the rights of young people like her, talking to the international press, and convincing high-ranking state officials to give trans kids a chance to just be themselves.

Most important to Harleigh, though, is being a friend to kids like her. “I want to be a safe space for anybody that needs to talk to me,” says Harleigh. “I guess that’s kind of why I’m here.”

Harleigh grew up in the small town of Auburn, Alabama, in the east-central part of the state. As a young child, she says she was mesmerized by her mom Lisa’s colorful nails and would paint her own with a marker or crayons in kindergarten. When mom noticed, Harleigh asked if she could paint them like hers, and got a lesson.

“And so the other kids around were, like, confused. ‘Why are you painting your nails?’ And my mom had me print out pictures of guys wearing nails, like rock stars wearing these kinds of nails, and I brought them to school saying, ‘Look, I’m not crazy!’ So, yeah, my mom and my dad have always just kind of supported my interests no matter what, which I’m so grateful for.”

When it came to her gender identity, the family had a lot to learn. At eight or nine, Harleigh saw a YouTube video of a boy describing coming out.

“That kind of rings a bell for me,” she recalls thinking.

At 10, she found a different influencer who “was talking about coming out as trans, and that kind of really clicked so many boxes for me,” she says. “That’s exactly who I am. And so I went to my parents and, you know, at first it was kind of like, ‘We don’t really know much about this. We need to learn about this.'”

“But once we kind of figured it all out as a family,” with Jeff and Lisa and Harleigh’s older brother, Robert, “it’s been great for all of us from here. I think it’s been five years since I’ve officially come out.”

PFLAG set Harleigh on course to becoming a teenage advocate.

“Once I got to sixth grade, bullying kind of became a problem and I had to drop out of public school,” says Harleigh. “I felt very alone at the time.”

Her parents took her to a local meeting of the support group, “and that was kind of a turning point for me. That next year in seventh grade, I went back to public school, proud of who I was, no matter, like, the bullying or what was going on with other kids, and so that kind of propelled me to start talking about who I am, trying to educate people about what being trans means, and just get the word out that, you know, I’m just a normal person, just like your daughter, or just like your child. I just happened to be, you know, born in the wrong body.”

With the introduction of anti-trans legislation in Alabama targeting kids in 2019, Harleigh stepped into the international spotlight with her very first interview as an activist — live on camera with the BBC.

“Yeah,” recalls Harleigh laughing, “it was like definitely an interesting first start, but that kind of kicked off different articles, and then it was just like an endless cycle. But you know, I’m glad we were given the opportunity because I know a lot of trans kids in Alabama can’t do their story, and can’t share their voice, and so to be that voice is really important to me.”

This year, Harleigh met with lawmakers in Montgomery as the state legislature debated an anti-trans bill criminalizing gender-affirming care for anyone under 19. The bill has since been signed into law and subsequently tied up in the courts.

“He seemed very into the conversation and he was definitely listening. And, you know, he seemed pretty genuine talking to me, and he was like, ‘Yeah, I’ll definitely bring this up to the governor.’ But I think in the end, her signing it was, you know, a partisan issue,” says Harleigh.

“At the end of the day, politics is politics. And no matter how important, how compelling your story is, especially in 2022, and especially with Republicans who are going against that, especially in a midterm election year, it’s very bad for her campaign. And so I think that, combined with the pressure, is really what forced her to sign that bill.”

“Or, you know, I could be wrong and she just wanted to sign it. But I think we made at least a little bit of an impact.”

Harleigh’s dad says those small victories are at the heart of what makes his daughter special.

“She’s always willing to take a few minutes and talk to someone. Doesn’t matter how busy she is, or what’s going on in her life. You know, when I say ‘Look, I’ve got a parent that has a kid, you know, they’d love for you to talk to the kid for just a few minutes,’ and she’s like, ‘Absolutely. I’ll do that.'”

Editor’s note:  A previous version of this article referred to Harleigh Walker’s mother Lisa by the incorrect name. We regret the error.