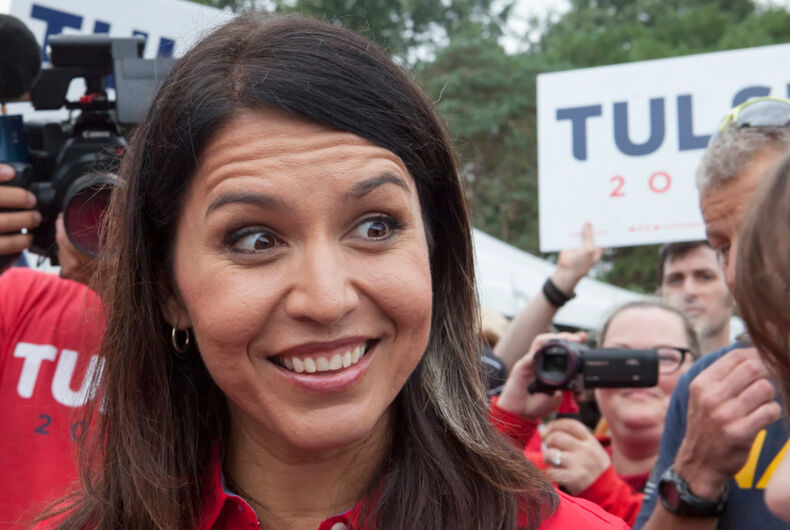 When conservative congresswoman from Hawaii and 2020 presidential candidate Tulsi Gabbard announced on Tuesday that she’s leaving the Democratic Party, gay Pennsylvania state Rep. Malcolm Kenyatta (D) said what everyone was thinking in a six-word tweet.

In a video announcement, Gabbard – who has a history of anti-LGBTQ actions and rhetoric – said she could no longer remain in the Democratic Party, citing perennial rightwing complaints like “wokeness” and “anti-white racism” as well as more recent conservative issues like the FBI investigating the Trump administration for its alleged crimes.

“[The Democratic Party is] under the complete control of an elitist cabal of warmongers who are driven by cowardly wokeness, who divide us by racializing every issue and stoking anti-white racism, who actively worked to undermine our God-given freedoms that are enshrined in our Constitution, who are hostile to people of faith and spirituality, who demonize the police but protect criminals at the expense of law-abiding Americans, who believe in open borders, who weaponize the national security state to go after their political opponents, and above all, who are dragging us ever closer to nuclear war,” she ranted.

Gabbard continued by saying that the Democratic Party is no longer “of, by, and for the people” but is instead “of, by, and for the powerful elite.” She called on other “common sense, independent-minded Democrats” to join her in leaving the party if they can “no longer stomach the direction that the so-called ‘woke’ Democratic Party ideologues are taking our country.”

I can no longer remain in today’s Democratic Party that is now under the complete control of an elitist cabal of warmongers driven by cowardly wokeness, who divide us by racializing every issue & stoke anti-white racism, actively work to undermine our God-given freedoms, are… pic.twitter.com/oAuTnxZldf

Wait, Tulsi Gabbard was a Democrat?

It makes sense that Kenyatta would criticize Gabbard’s politics. Gabbard is probably the most right-leaning Democrat in the party and she has frequently attacked fellow Democrats, transgender people, and U.S. allies while aligning herself with right-wing media figures.

Gabbard served as a House Democrat representing Hawaii from 2013 to 2020. As a young politician, she railed against pro-marriage advocates as “homosexual extremists” and once worked for a religious-right hate group that promoted conversion therapy.  She apologized for these offenses when she unsuccessfully ran for president in 2020, but she also accused Democrats of “fomenting religious bigotry” for wanting Christian judges not to impose their religious beliefs on others.

During her campaign, Gabbard refused to respond to an HRC questionnaire on LGBTQ issues, unlike every other major Democratic candidate. She also repeated right-wing attacks against former Secretary of State Hillary Clinton and now-Vice President Kamala Harris.

After her campaign crashed and burned, she spent her final days in Congress introducing legislation to ban trans women from sports that could have required genital examinations for young girls. She has said that gender-neutral language denies the “existence of women.” She has also long been a fixture on Fox News — especially on the show of transphobic, pro-Russian, white supremacist Tucker Carlson, which she has guest-hosted.

After Russia first invaded Ukraine, Gabbard repeated a conspiracy theory about U.S. biological labs in Ukraine, a lie that Russian authorities could use as a pretext to use of biological or nuclear weapons against Ukrainian civilians.

Coming out is important. But no one should be forced out before they are ready.