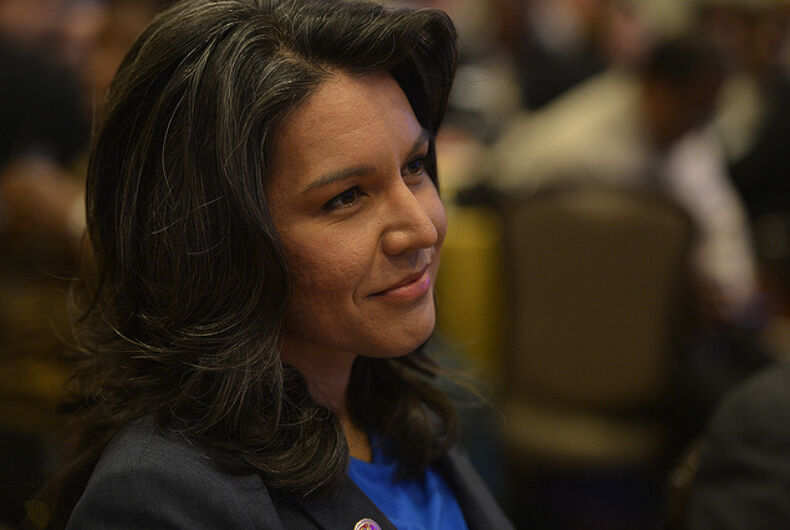 Rep. Tulsi Gabbard (D-HI) is notably absent from the list of Democratic presidential candidates who have responded to a survey on LGBTQ issues from the Human Rights Campaign (HRC).

HRC has published responses from all the other major candidates.

“Unfortunately, we did not receive responses from Tulsi Gabbard ahead of publication,” their website says. “Should she send a response, we will update the site accordingly.”

Gabbard has a long history of opposing LGBTQ rights, though she claims to have evolved.

To start, the Congresswoman’s father, Mike Gabbard, founded the organization “Stop Promoting Homosexuality” in an effort to prevent Hawaii from legalizing marriage equality.

Gabbard followed in her father’s footsteps when she became a state legislator, where she fought against legalizing civil unions for same-sex couples and referred to LGBTQ people as “homosexual extremists.” She also opposed a bill designed to protect anti-gay bullying in schools, claiming it would teach kids that homosexuality is “normal and natural.”

Since she announced her presidential candidacy, Gabbard has claimed her experience serving in the military helped her see the light. She has apologized for her previous comments and record against the LGBTQ community. She has also publicly supported marriage equality and is a co-sponsor of the Equality Act.

Despite her lengthy apology video and increased support for LGBTQ rights, many have remained skeptical about whether Gabbard has really changed. Some have suggested that while she now believes the government should not have the right to dictate LGBTQ people’s lives, she still maintains the personal belief that homosexuality is immoral.

The Washington Blade also pointed out that last year, Gabbard did not sign a friend-of-the-court brief for the Supreme Court in support of the argument that anti-LGTBQ discrimination is a form of sex discrimination under the Civil Rights Act of 1964.

The Blade reached out to Gabbard’s campaign for comment but has not yet heard back.

Why would Bernie Sanders have such kind words about homophobic regimes?

Autistic teen faced relentless bullying since he came out at age 12. He died by suicide.