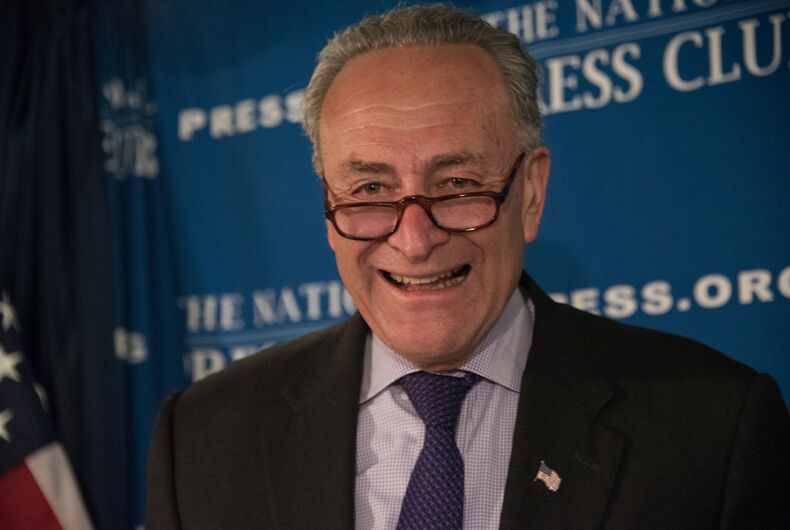 With time running out to complete Congressional business before the November midterm elections, Senate leadership is debating whether or not to bring the Respect for Marriage Act – which would make marriage equality federal law – up for a vote.

Democrats have been on a winning streak this summer, passing landmark legislation including the Inflation Reduction Act; the CHIPS and Science Act, which accelerates high-tech American manufacturing; the bipartisan Safer Communities Act targeting gun violence; and the PACT Act, addressing military veterans’ exposure to burn pits and other toxins.

It’s a winning record going into an election cycle traditionally unfavorable to the party in power. With inflation coming down and poll numbers going up that indicate Americans’ growing fear of anti-democratic values embodied in the MAGA movement, Dems are hopeful they’ve got a chance in November to buck historical trends.

And political momentum will be a determining factor in Senate leader Chuck Schumer’s (D-NY) calculations about whether to bring the Respect for Marriage Act up for a vote before or after the midterm elections.

“My impression is that the majority leader is eager to put this bill on the floor in September, and I hope that he will,” Sen. Susan Collins (R-Maine) said in an interview with Politico. “In an election year, I hope this can be a sincere effort by the majority leader, and that he will resist the urge to play politics with the bill. But we are dealing with Sen. Schumer, so.”

In August Schumer said, “We will have a vote on it. Not giving you a timetable.”

Democrats will need 10 Republican senators to sign on in support of the bill, already passed by the House, which would codify federal recognition of same-sex marriages in the U.S. regardless of actions the Supreme Court may take after overturning Roe v. Wade in June. In a concurring opinion on that decision, Justice Clarence Thomas suggested also overturning Obergefell v. Hodges, the decision in 2015 granting federal recognition of same-sex unions.

To date, three Republican senators have committed to a yes vote: Collins, Rob Portman of Ohio and Thom Tillis of North Carolina. Sen. Lisa Murkowski (R-AL) is a soft yes with a commitment to review the legislation. Senator Ron Johnson, up for reelection in Wisconsin, signaled he had “no reason” to oppose the bill before backtracking to add a religious liberty amendment.

But several Republican senators have not given a firm no, which Collins thinks is a good sign. “We’re in pretty good shape” for passage, she noted hopefully.

With success not a given, though, Schumer has a choice to bring up the bill for possible failure, a potential political win demonstrating Republican hostility to LGBTQ issues. But aides claim Schumer wants the bill to pass, adding to Democrats’ solid record of accomplishments. A defeat could tarnish that winning image.

“It just shows these are very popular, the American public overwhelmingly supports them. And it’ll show the public if we can’t get there, how far we have to go to get there,” Kaine said.

Lead sponsor of the Respect for Marriage Act, Senator Tammy Baldwin (D-WI), will meet with GOP colleagues when they return from summer recess to “compare notes on their outreach efforts to build more support from Senate Republicans,” according to her office.

Then it’s up to Schumer to decide.