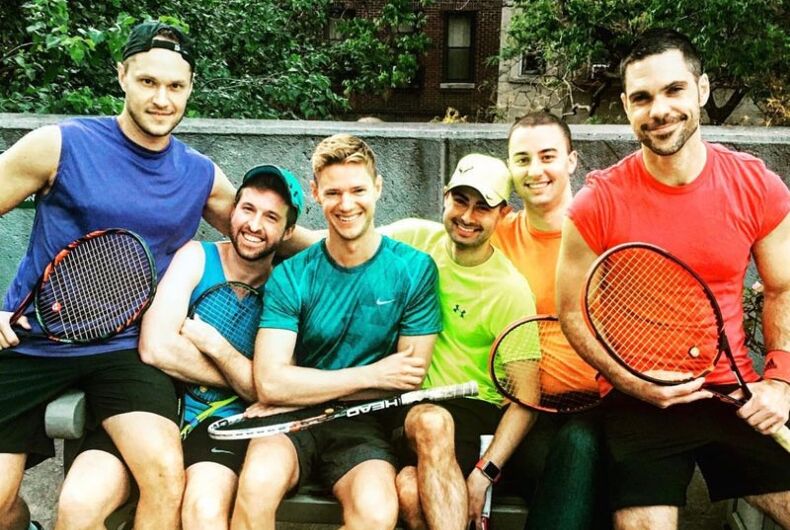 With the U.S. Open heading into the home stretch, Jon Guerrica might be the busiest man in tennis. At a tournament that’s noteworthy for being Serena William’s swan song, Guerrica’s keeping tabs on Williams while supporting his best friends on the women’s pro tennis tour, 21st ranked Vika Azarenka of Belarus and USA’s Madison Brengle currently ranked #64.

With U.S. Open attendance at an all-time high this year, Guerrica is also on a mission to promote the latest episode of his popular and influential Fantastic Tennis podcast. His U.S. Open pod features an interview with Greet Minnen, a gay player from Belgium ranked #52 in doubles.

After famously dispatching former champ Garbiñe Muguruza at Wimbledon earlier this summer, Minnen was eager to see if her singles game could match the success she enjoys on the doubles court at 2022’s final Grand Slam tournament.

It wasn’t meant to be.

Minnen had former champ Sloane Stevens on the ropes before losing a first-round three-set thriller.

The payday for a first-round singles loss at this year’s U.S. Open is $80,000, a sizable consolation for a player like Greet Minnen whose career earnings are just shy of $1.3m.

When Guerrica asked about the dearth of gay male tennis pros, Minnen reiterates why representation matters.

”I think we (women) also had a very important role model when we were younger,” Minnen said. “Billie Jean King was the first one and since then, I think for a lot of WTA players, it helped you come out and be open about it. There is nobody (on the men’s tour) who really came out, who was a big role model and I think we miss that. We miss that one person who is a big name in tennis and who may be gay and who can be open and talk about it.”

Will there be a gay male tennis pro anytime soon?

A COVID side hustle

Jon Guerrica started the Fantastic Tennis podcast during the COVID lockdown as a love note to his favorite sport. The podcast, he explained, was a natural extension of his tennis super fandom. For each episode, Guerrica interviews a current or former female tennis pro and welcomes another LGBTQ tennis fan as a co-host.

Chris Evert was a recent guest joining a roster of tennis all-stars including Pam Shriver, Lindsay Davenport, and Tracy Austin.

“Many of my guests have won a Grand Slam of some type, as well as Olympic medals,” Guerrica said of his lineup.

But Guerrica’s podcast proves that some of the most interesting conversations are with players who aren’t household names.

Madison Brengle has earned nearly $4m since turning pro in 2006. Wins over Serena Williams and Naomi Osaka propelled her ranking to a career-high #35 back in 2015. Bringle’s appearance on Jon’s Fantastic Tennis podcast was filled with professional tour insights and lots of personal chemistry.

“I think what makes Jon so special to me and to so many female tennis pros is that he really sees us as individual people,” Brengle told LGBTQ Nation. “ It’s too common in tennis media that we’re only shiny and valuable when we’re winning. Jon has this incredible ability to let our real personalities and unique qualities show. He brings fun and happiness back to talking about this wonderful sport.”

And for Guerrica, each podcast is a chance to elevate queer tennis and sports fandom.

”Gay culture celebrates who we emulate and who we admire,” Guerrica said of his own tennis obsession. “I started this podcast because I’m a major tennis fan. I’ve heard interviews with tennis players and pro athletes hundreds of times in a podcast space and in most instances, it was always the same canned, recycled answers from the player.”

If you’re looking for a hardball interview, this podcast ain’t it. But what Guerrica deftly demonstrates is that sometimes keeping it light is the best way to go deep.

“I wanted to create a safe space with some genuine conversation so that players feel comfortable letting their guard down and allowing fans to get to know them on a level we (fans) seldom hear,” Guerrica explained. “I always find that if I can be overly prepared and make the show a high-energy fun space, conversations tend to go places that I’d typically find if I were chatting with one of my good friends.”

In addition to being one of tennis’ biggest and most influential super fans, Guerrica knows his way around a tennis court as evidenced by a trophy collection from playing singles and doubles on the GLTA tennis tour. Comprised of roughly 70 tournaments around the globe, the GLTA tour provides community and fellowship to LGBTQ athletes who play competitive tennis.

Daniel Ou founded the first GLTA-sanctioned tournament in Hong Kong in 2017 and was the tournament director for the 2022 Vancouver International Pride tennis event.

“Having been a part of the GLTA World Tour for two decades and counting, I can proudly say that not only has it given me purpose in competitive tennis, but it has afforded me some lifelong friendships from the incredible sense of camaraderie and community built through our mutual love for the sport,” Ou told LGBTQ Nation. “I’ve been fortunate to have played GLTA tournaments in the US, Canada, and all over Europe, Australia, and Asia and the one common theme is that we LGBTQI+ players and our allies all appreciate the safe space where we can not only compete but socialize under the umbrella of sportsmanship, fellowship, and fun.“

Ou is a big fan of Guerrica’s Fantastic Tennis podcast.

“His ground-breaking show has allowed LGBTQI+ tennis fans all over the world the opportunity to wax poetic on the players, history, and intrigue of the professional tennis tour in a way that has never been done before. Jon’s vibrant, infectious personality combined with his impressive knowledge of pro tennis has been a breath of fresh air in the tennis commentary landscape. He often makes his esteemed guests feel so comfortable that they will open their hearts and memories for some truly insider tidbits,” Ou added.

Those sentiments were echoed by Patrick Smollen, a GLTA tour regular and one of Jon’s best friends on (and off) the counts.

“My main group of tennis friends consists of people I’ve met traveling and playing tournaments on the GLTA tour,” Smollen said. “The tournaments are a great opportunity to reconnect with those friends in new and exciting places, while staying active and bonding around a common interest. I’m thrilled to see how successful the Fantastic Tennis Podcast has become. Jon has a natural bond with the guests and knows how to make them feel at ease — which is when we get the juiciest details!”

The Gay and Lesbian Tennis Alliance (GLTA) welcomes players of all levels. Guerrica’s Fantastic Tennis podcast is everywhere you find your podcasts including Spotify.