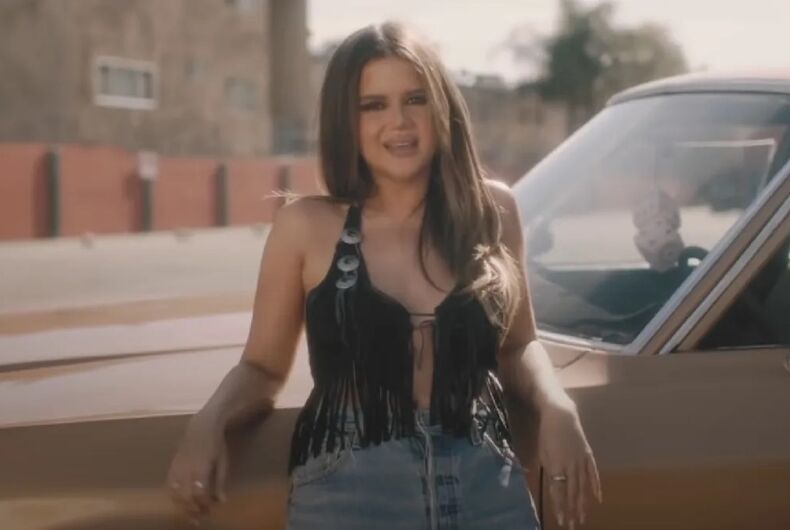 Morris immediately mocked Carlson’s insult by publishing a fake image of herself with a chyron from Carlson’s show declaring her as a “lunatic country music person.”

Morris then published a tweet announcing the sale of a t-shirt with the words, “Marren Morris: Lunatic Country Music Person” on it. The shirt also had the phone number of the Trans Lifeline, a peer support phone service run by trans people for trans and questioning peers.

“All proceeds will be split between @TransLifeline & the @GLAAD Transgender Media Program,” Morris wrote in the tweet.

During his rant against Morris, Carlson said that in 2022, “You’re required to believe that minors should be castrated by their parents.”

Brittany Kerr Aldean told Carlson, “For some reason, people are thinking that we can let a child choose their gender so young. It’s very baffling to me. Especially when that process is irreparable. I mean, you wind up castrating children removing their sex organs, making them sterile for life. I mean, these are huge consequences.”

In reality, genital surgeries for trans minors are rare, but cisgender parents regularly conduct such surgeries on intersex children without the child’s informed consent. Other forms of gender-affirming healthcare for trans youth — such as puberty blockers and hormone replacement therapy — are reversible and do not cause permanent sterility.

Carlson has repeatedly used his show, Fox News’ most popular program, to push an anti-Semitic and white supremacist “replacement theory,” the idea that immigrants and people of color seek to replace white Americans to fundamentally change the nation’s racial makeup and political culture. The theory has been cited by white supremacists as a justification for political and physical violence against Jews and non-white people.

The feud between Morris and Brittany Kerr Aldean began on August 24 when Aldean wrote on an Instagram video caption, “I’d really like to thank my parents for not changing my gender when I went through my tomboy phase. I love this girly life.” Her comment ignorantly parroted several right-wing claims about trans youth and highlighted her and her husband’s recent outspoken conservative activism.

On Twitter, Morris responded to the video by writing, “You know, I’m glad she didn’t become a boy either because we really don’t need another as***le dude in the world. Sucks when Karens try to hide their homophobia/transphobia behind their ‘protectiveness of the children.’”

Aldean has since marketed clothing with the phrase “Don’t Tread On Our Kids.” Profits from the clothing will go to Operation Light Shine, a Nashville-based organization that combats human trafficking and child exploitation.

Aldean’s donation furthers the right-wing claim that LGBTQ activists and allies of trans-youth want to “groom” children for sexual exploitation.