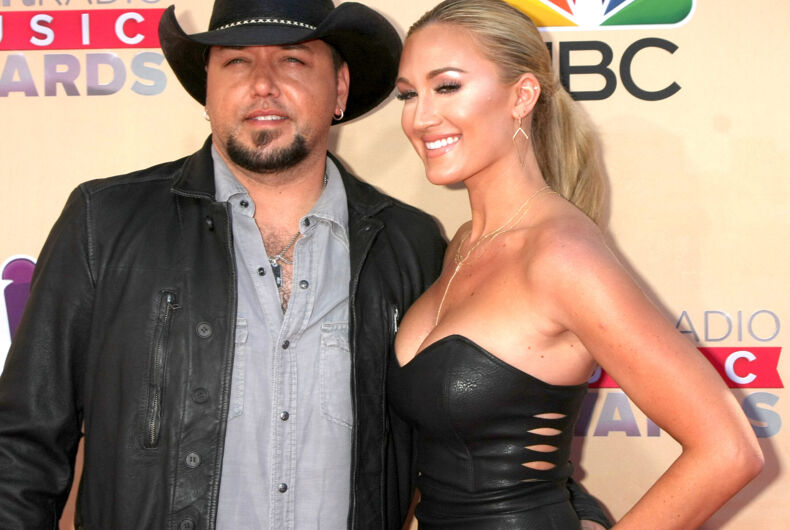 In an August 24 video shared with her 2.2 million Instagram followers, Brittany Kerr Aldean wrote, “I’d really like to thank my parents for not changing my gender when I went through my tomboy phase. I love this girly life.” The accompanying video showed a before-and-after of her in makeup, hairdo, and sparkling blouse.

Her husband commented on her post with a laughing emoji, writing, “Lmao!! I’m glad they didn’t too, cause you and I wouldn’t have worked out.”

Brittany Kerr Aldean’s comment ignorantly parrots the right-wing claim that trans kids only exist because adults coercively “change” their gender identities. Right-wingers use this argument to claim that LGBTQ people and allies are “grooming” children into queer identities and sexual abuse. As such, right-wingers argue, we “protect children” by banning LGBTQ content from public schools.

While there is no evidence that parents are making kids transition – if anything, authority figures in trans kids’ lives often strongly oppose their children living authentically – the right has come to believe that there are parents and teachers are forcing kids to change genders for selfish reasons. Rep. Marjorie Taylor Greene (R-GA) even accused the parents of wanting a trans kid because trans kids are fashionable “like a handbag.”

Though Brittany Kerr Aldean’s comment may seem innocuous to some, she and her husband have become “increasingly outspoken as conservative activists, without too much commentary or pushback from more centrist or liberal-leaning country stars,” Variety reported.

In an overlong follow-up comment she posted on Instagram, she compared identifying as transgender with identifying as a cat or as a dinosaur. She added, “Advocating for the genital mutilation of children under the disguise of love and calling it ‘gender affirming care’ is one of the worst evils…. Love is protecting your child until they are mature enough as an adult to make their own life decisions.”

Gender affirming care for minors does not include surgery. The myth that it does has become a popular belief for the right, leading to death threats against children’s hospitals.

Her comments repeat far-right transphobic talking points, as explained below.

“You’d think celebs with beauty brands would see the positives in including LGBTQ+ people in their messaging,” Grammy-nominated country singer Cassadee Pope subtweeted in a post that didn’t name Brittany Kerr Aldean. “But instead here we are, hearing someone compare their ‘tomboy phase’ to someone wanting to transition. Real nice.”

You’d think celebs with beauty brands would see the positives in including LGBTQ+ people in their messaging. But instead here we are, hearing someone compare their “tomboy phase” to someone wanting to transition. Real nice.

Country musician Maren Morris, whose music has earned her over 30 awards and 90 awards nominations, also responded.

Initially replying in the Instagram comment section of Brittany Kerr Aldean’s video, she wrote, “You know, I’m glad she didn’t become a boy either because we really don’t need another as***le dude in the world. Sucks when Karens try to hide their homophobia/transphobia behind their ‘protectiveness of the children.’”

It’s so easy to, like, not be a scumbag human? Sell your clip-ins and zip it, Insurrection Barbie.

Morris’ reply caught the attention of transphobic conservative pundit Candace Owens. Owens tagged her in a Twitter post, writing, “It’s easier to not castrate your children. But I guess whatever helps sell bad records.”

Morris replied to Owens, writing, “Oh my god, not you. My Grammy is positively sobbing right now. Also, why do y’all always go to ‘castration’ and ‘pedophiles’ to try and shut an argument down? It’s honestly concerning and worth looking into.”

Owens replied, “When you chop a penis off, it is the literal definition of castration. So yes, I always go to basic English definitions. Also, I said groomers—not pedophiles. Got something else on your mind you want to share with the class, sicko?”

A groomer is someone who befriends and establishes an emotional connection with a minor, and sometimes the child’s family, to lower the child’s inhibitions with the objective of sexual abuse, according to a definition provided by the anti-sex abuse organization The Pandora Project.

In response to Pope’s initial tweet, queer musician Joy Oladokun wrote, “Waking up happy that my parents didn’t raise me to be as rude and nasty as @brittanyaldean.”

I also would like to say the LGBTQ’s have clearer skin without whatever she pushin’ https://t.co/NFGSSXMy8Y pic.twitter.com/D91RKWU8Ty

Caribbean court strikes down ban on “abominable crime of buggery”