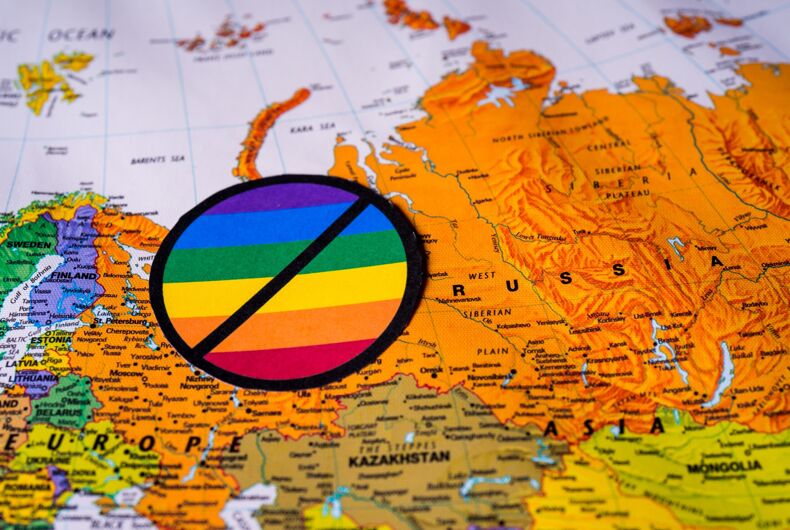 Since 2013, Russia has had a law in place that criminalizes the distribution of “homosexual propaganda” to minors. This vague and overly broad law can be used to punish anyone who speaks positively about LGBTQ relationships or displays any kind of pro-LGBTQ sentiment. As a result, Russia has become one of the most dangerous countries in the world for members of the LGBTQ community.

Recently, Russian legislators have proposed to extend the LGBTQ propaganda law, which would criminalize anyone who promotes “non-traditional” sexual relationships to minors and adults. This, critics say, will further endanger the lives of Russia’s LGBTQ population, which has already suffered increased harassment, violence, and hostility in recent years.

Here, we take a look at the state of LGBTQ rights in Russia and what has fueled the shift towards anti-LGBTQ sentiments there.

Is It Illegal To Be Gay In Russia?

Technically, it isn’t illegal to be LGBTQ in Russia. Homosexuality was decriminalized in 1993 and declassified as a mental illness in 1999. Transgender Russians have also been able to legally change their gender and identity documents since 1997.

However, there are currently no anti-discrimination protections in the country, despite the high rate of homophobia in Russia. Owing largely to President Vladimir Putin’s plan to position himself as the “world’s leading defender of traditional values”, the Russian government has only made it harder for its LGBTQ population to live freely and openly.

In 2012, the year Putin assumed office as President, the city government of Moscow banned LGBTQ pride parades for the next hundred years.

So, what is life like for an LGBTQ person living in Russia today? Here is a brief primer on Russian LGBTQ rights in the time of Putin:

Putin’s government classifies LGBTQ people as a threat to the traditional family values it hopes to uphold. In 2013, Putin signed a federal law banning the “promotion of nontraditional sexual relations to minors”. Ultimately, this law makes it illegal for anyone to introduce information about LGBTQ people to minors – encompassing any information shared online, on TV, and by the press.

The law has not only had a chilling effect on LGBTQ rights but has also been used as a justification to shut down valuable websites that offer resources and services to LGBTQ youth. The law also discourages mental healthcare providers and educators from giving patients and students the information and care they need to cope with their struggles and navigate a homophobic environment.

According to LGBTQ advocates, this law is about much more than simply “protecting children” – it is a political tool to further the state’s anti-Western liberalism agenda. LGBTQ people are positioned as dissidents who wish to “finish off the traditional morality” – essentially making them out to be enemies of the state and a threat to Russian culture and values. According to the co-founder of the Russian LGBT Network, Igor Kochetkov, the 2013 law “is used in information campaigns to generate hatred, including against human rights defenders.”

“In the rhetoric of the Kremlin and state-loyal media, LGBT rights, feminism, multiculturalism, and atheism are identified not only as foreign to Russia’s values but as existential threats to the nation,” says the Boston Review.

The European Court of Human Rights and the United Nations Committee on the Rights of the Child have both condemned the law, as it is in opposition to their policies on freedom of expression and the right to assembly.

In April 2021, Putin signed a series of constitutional amendments that included a formal ban on same-sex marriage in the country. Previously, the Russian constitution did not explicitly define marriage as a relationship between one man and one woman – a loophole that gave LGBTQ Russians a sliver of hope that same-sex marriages could be introduced on that basis.

But with the recent amendments – which also removed term limits for the president and allowed the Russian constitution to take precedence over international law – LGBTQ Russians now have little hope for marriage equality in their country.

In 2017, reports surfaced of a “gay purge” in the semiautonomous state of Chechnya. These purges, which were conducted by Chechen authorities, targeted gay and bisexual men and resulted in the detention of over 200 people. More have reportedly been beaten, tortured, and even killed.

Despite international protests and demands to end the purge from the UN and the European Court of Human Rights, the detention and torture resumed in 2019. According to a report by Human Rights Watch, men have been “kicked, beaten, and shocked with electricity” and were detained for three to 20 days. They were also stripped of their cellphones and forced to out other queer men.

According to Amnesty International, Russian authorities have “failed to provide justice” for the victims of the Chechnyan gay purges and offer effective protection to Igor Kotchetkov, who received death threats after leading the public investigation of the incident.

In the 2020 documentary Welcome to Chechnya, which follows a group of activists as they attempt to evacuate queer people from the region, Chechen leader Ramzan Kadyrov blatantly denies the mere existence of queer people in Chechnya, stating, “We don’t have LGBT people here.”

Russia has come under fire in recent years for its treatment of the LGBTQ community. With lawmakers proposing a total ban on spreading “LGBTQ propaganda” to both minors and adults and the amendment to the Russian constitution that makes same-sex marriage in the country illegal, LGBTQ Russians face a mountain of challenges in earning the right to live openly and safely.

These policies have not only curtailed the rights of LGBTQ people in Russia but have also inspired deeper hate and homophobia in the country – particularly among its ultra-conservative population.

You can show your support by learning more about the situation in Russia and spreading awareness.

This Week on LGBTQ Twitter: London Bridge is falling down laughing