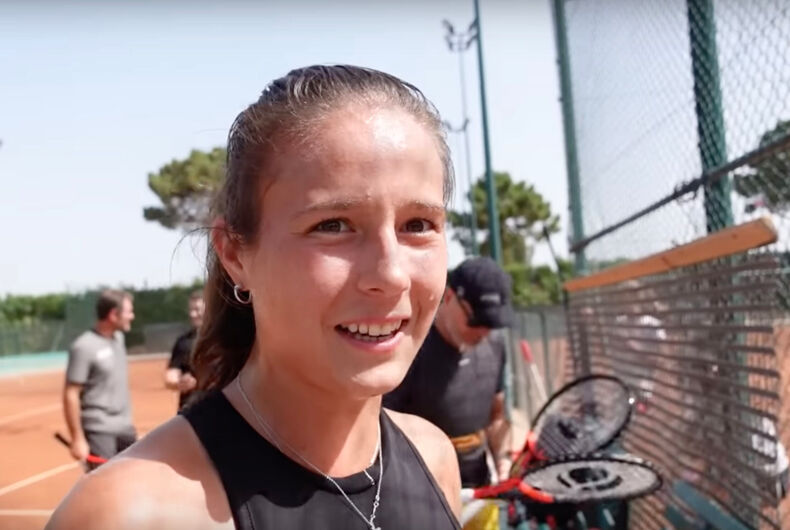 Daria Kasatkina, Russia’s current number one tennis player in singles, has come out. The 25-year-old made the revelation in an interview with Russian vlogger Vitya Kravchenko for his hour-long documentary about Russian tennis players living in Spain.

Kasatkina spoke about being inspired by Russian footballer Nadya Karpova, who recently came out publicly. “I was happy for her but also other people, especially girls who needed to know that,” Kasatkina said. “It is important for the young people who have a hard time with society and need support. I believe it’s important that influential people from sports, or any other sphere really, speak about it. It helps.”

Kravchenko then asks if Kasatkina has a girlfriend, to which she simply replies, “Yes.”

Kasatkina goes on to say that living in the closet is impossible. “Not for the long run, no. It is too hard. It is pointless. You will be constantly focused on that until you choose to come out,” she explains. “Of course, it’s up to you, how to do it and how much to tell. Living in peace with yourself is the only thing that matters, and f**k everyone else.”

Kravchenko also asks Kasatkina what she thinks of the “taboo” against LGBTQ people in Russia.

“Oh, so many subjects are taboo in Russia, some of them more important than ours, it’s no surprise,” she says. “This notion of someone wanting to be gay or becoming one… So ridiculous. I think there’s nothing easier in this world than being straight. Seriously, if there is a choice, nobody would choose being gay. Why make your life harder, especially in Russia?”

“When will it be ok [for gay people] to hold hands in public in Russia?” Kravchenko asks.

“Never,” she replies. “Judging by [the way] things are going now, it will never be ok.”

Kasatkina is likely referring to her country’s so-called “gay propaganda” law, which imposes fines of up to one million rubles ($15,500 U.S.) or up to 15 days in jail for promoting “nontraditional sexual relations among minors.”

Recently, Russian lawmakers have proposed expanding the law to ban on “gay propaganda” to include people of all ages. Critics of the existing law say that it has fueled harassment and acts of violence against Russia’s LGBTQ community.

Meanwhile, Kasatkina has seen an outpouring of support. Shortly after the documentary was posted to YouTube, she post a photo of herself with her girlfriend, Russian Olympic figure skater Natalia Zabiiako. Karpova was reportedly one of the first to express her support, commenting “You are beautiful! I’m proud,” and sharing Kasatkina’s post in her own Instagram stories.

The Sims 4 will finally let players choose sexual orientations, making the game queerer than ever