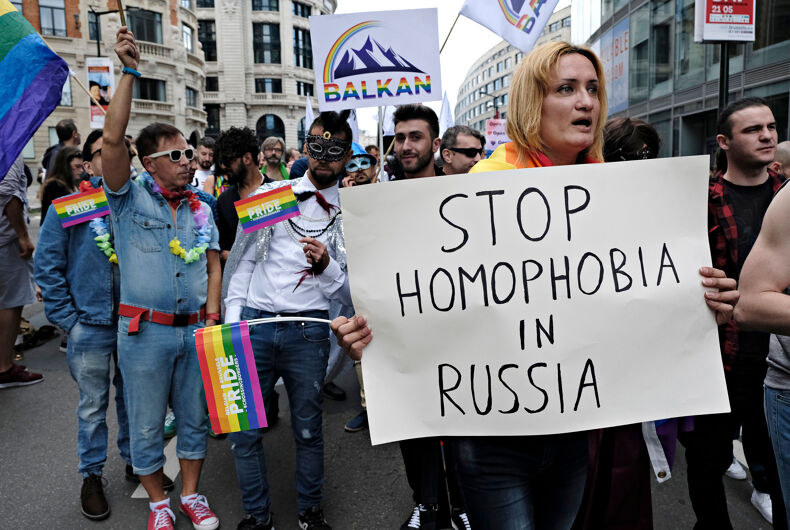 Russian lawmakers have proposed expanding the country’s existing anti-LGBTQ “gay propaganda” law to include people of all ages instead of just minors.

“We propose to generally extend the ban on such propaganda regardless of the age of the audience (offline, in the media, on the internet, social networks and online cinemas),” Khinshtein wrote in a message on his Telegram social media channel. While the platform Telegram is associated with the far right in the U.S., it’s more popular and more mainstream in eastern European countries.

The current law, signed by President Vladimir Putin in 2013 amidst international condemnation, imposes fines of up to one million rubles ($15,500 U.S.) or up to 15 days in jail for promoting “nontraditional sexual relations among minors.” Khinshtein’s committee is also proposing stricter punishment for violation of the new law.

In another Telegram post last week, Parliamentary Speaker Vyacheslav Volodin said that, since Russia left international human rights watchdog organization the Council of Europe, the country is no longer bound by pressures to legalize same-sex marriage. On March 15, in the wake of Russia’s invasion of Ukraine, Russia withdrew from Council of Europe.

Last month, Putin signed a bill breaking with the European Court of Human Rights, which was unanimously passed by the Russian parliament.

“Demands to legalize same-sex marriages in Russia are a thing of the past,” Volodin said. “Attempts to impose alien values on our society have failed.”

While homosexuality has been legal in Russia since 1993, proponents of the existing “gay propaganda” law have said it is intended to combat the influence of Western liberalism and boost the country’s dwindling birth rates. Critics meanwhile say it reflects hostility toward the country’s LGBTQ community and has fueled harassment and acts of violence. The law has also inspired similar laws in Hungary and Romania.