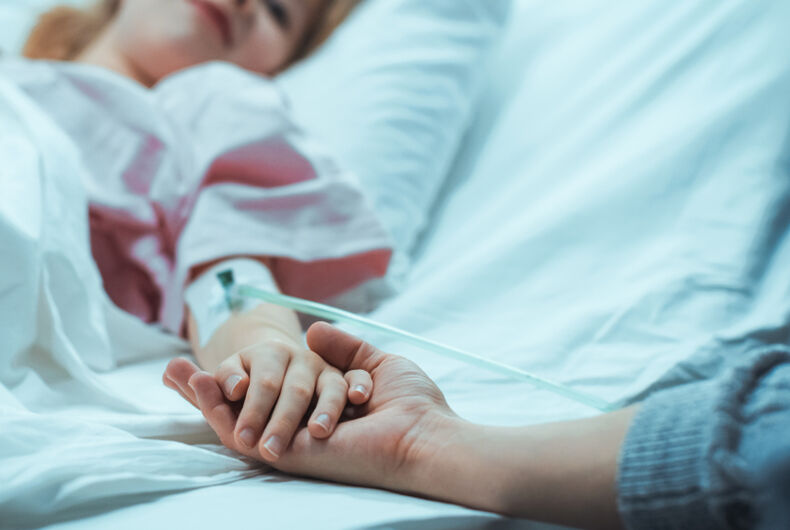 A Westfield, Massachusetts, woman has been arrested for calling in a bomb threat to Boston Children’s Hospital. Catherine Leavy, 37, is reportedly a Trump and Republican party donor.

On Thursday, the FBI arrested Leavy, who reportedly made the threat using her personal cell phone, allowing investigators to quickly identify her.

“There is a bomb on the way to the hospital, you better evacuate everybody you sickos,” Leavy told a Boston Children’s operator on August 30, according to FBI documents.

During an interview with investigators, Leavey “expressed disapproval of BCH on multiple occasions,” according to an FBI affidavit. “When agents further questioned her based on those beliefs, LEAVY admitted that she called BC on August 30, 2022, and made the threat. LEAVY stated that she had no plan or intention to actually bomb BCH.”

As The Daily Dot reports, Federal Election Commission records show that Leavy has made donations to Trump and the Republican Party 237 times since 2016.

In recent weeks, Boston Children’s Hospital, which ranks among the best pediatric medical facilities in the country, has been the target of what it has described as “hostile internet activity, phone calls, and harassing emails including threats of violence toward our clinicians and staff.” The harassment campaign is the result of misinformation that has proliferated on right-wing social media about the hospital’s Gender Multispecialty Service program, which treats children experiencing gender dysphoria.

The harassment campaign stems from a misleading, anti-trans video “expose” reposted on social media by Chaya Raichik, who runs the anti-LGBTQ Twitter account “Libs of TikTok.” The video’s claims have been debunked.

On Thursday, Raichik, who is reportedly solely responsible for the content on the Libs of TikTok account, reacted to news that the FBI had made an arrest in connection with the bombe threat. “This is great news,” she tweeted. “Threats of violence should always be taken seriously.”

“This alleged conduct is disturbing to say the least,” U.S. Attorney Rachael Rollins said at a press conference. “Bomb hoaxes costs cause fear, panic and a diversion of resources that have real impact on our communities … It seems that this is happening all too often that hoaxes are used to promote personal hateful beliefs and ideologies.”

“This behavior is nothing short of reprehensible and let me be clear, it needs to stop now,” FBI Boston Special Agent in Charge Joseph Bonavolonta said. “The real victims in this case are the hospital’s patients. Children with rare diseases, complex conditions and those seeking emergency care who had to divert to other hospitals because of these hoax threats.”