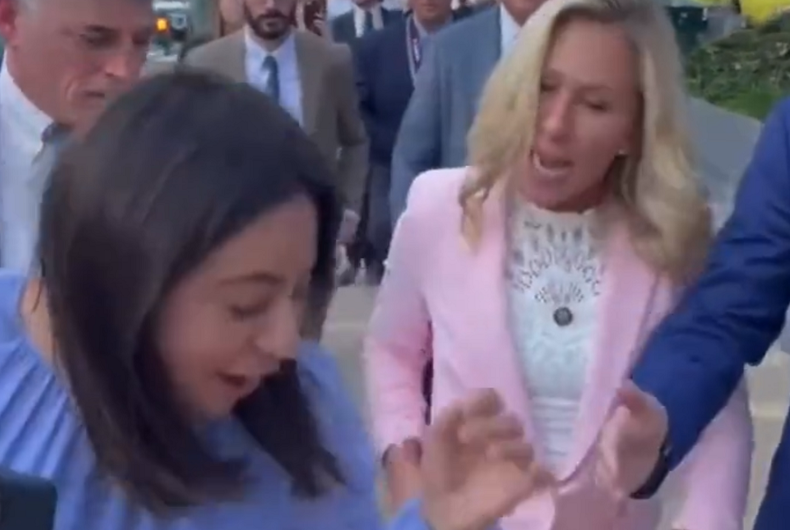 Rep. Marjorie Taylor Greene (R-GA) can be seen in a viral video kicking an unarmed 18-year-old protestor outside the Capitol yesterday.

And she appears to be proud of her actions.

Greene herself posted video of the incident involving 18-year-old anti-gun violence activist Marianna Pecora of the group Voters of Tomorrow. Greene was responding to Pecora and another young activist, Santiago Mayer, as they questioned her about her support of guns.

At one point, Pecora crosses in front of Greene, and Greene steps on her foot and says “Excuse me” loudly.

Then Greene says “Excuse me” and kicks Pecora.

“Oh my God,” Pecora says in the video.

Greene called the teens “foolish cowards” and disparaged the idea of obeying the law on Twitter when she shared the video of the confrontation.

Pecora posted video of the incident from another angle. “My name is Marianna Pecora, I’m the Deputy Communications Director @VotersTomorrow and @RepMTG just kicked me,” she wrote.

Did she literally just tweet out the video of her kicking me? https://t.co/b6blmrskRF

“It’s honestly, like, really disheartening to think that a bunch of kids can hold themselves with better composure than a sitting member of Congress,” Pecora told the Washington Post. “We’ve been sitting in meetings all week with both Democrats and Republicans. Nobody has been anything but respectful.”

“Everybody has been just so incredibly attentive, and taken us seriously and had, like, really productive conversations with us. Except for Marjorie Taylor Greene.”

Pecora has not yet said whether she will file a police report.

On Twitter, Greene attacked Pecora’s fellow activist Mayer for being born in Mexico.

“He should respect and be grateful for American freedoms, like our 2A, instead of trying to destroy them,” Greene wrote. “If he doesn’t like it, he can go back.”

Just like I said, he’s a paid political activist, who just so happens to be blessed to have immigrated to our great country.

He should respect and be grateful for American freedoms, like our 2A, instead of trying to destroy them.

If he doesn’t like it, he can go back. https://t.co/avBbGejOaG pic.twitter.com/DY1ReCPJQS

This isn’t the first time Greene has had a tense interaction with a teen anti-gun activist. In 2019, before she was a member of Congress, she harassed David Hogg, a survivor of the Parkland school shooting. She followed him for several blocks near Congress while shouting at him about the school shooting that killed 17 of his classmates.

Earlier this year, Greene said that Hogg should be “more masculine” and should “try hanging out with actual dear hunters” because he advocated licenses for gun ownership.