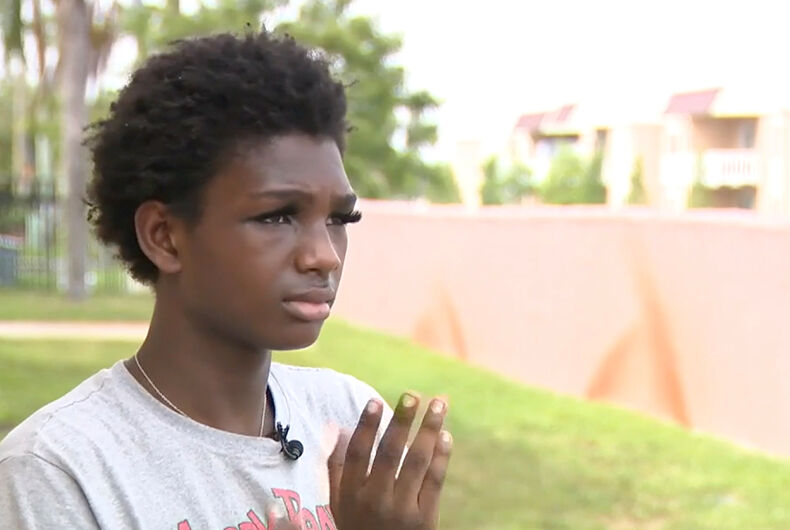 A transgender teenager in South Florida was the victim of a second brutal anti-LGBTQ attack.

Sanford says that a group of young people lured her out of her home on the pretext of hanging out. Once outdoors, Sanford said, “They came behind me and jumped me.”

Video of the attack provided to Miami ABC affiliate WPLG by Sanford’s grandmother shows three teens throwing Sanford to the ground at a neighborhood park and continuing to kick and punch her. Sanford said one of the assailants told her, “Don’t come around me with that gay s**t.”

On Wednesday, Broward County deputies arrested two of the teenagers seen in the video on misdemeanor charges.

“Two juveniles were arrested for simple battery and public orders crime prejudice,” public information officer Claudinne Caro wrote in a statement. “The juveniles were transported to the Juvenile Assessment Center.”

The investigation is reportedly ongoing and could lead to more arrests as well as federal hate crimes charges.

Video of a similar attack perpetrated against Sanford in the hallway of Deerfield Beach Middle School went viral last year. The video shows a classmate approach Sanford from behind and slam her to the floor as others surround her and cheer.

“He just stepped on my face, they were kicking and spitting on me and all that was a little clip of the video,” Sanford told local news at the time. “They were screaming. They were saying, ‘We got that gay fa***t.’”

“The school’s leadership is taking this incident seriously and is working with law enforcement in its investigation,” a Broward County Public Schools spokesperson told NBC Miami in a statement last year. “Any students involved will face appropriate school disciplinary consequences in accordance with the codebook for student conduct.”

But Sanford’s grandmother and aunt were outrage at the school district’s lack of response. Sanford no longer attends Deerfield Beach Middle School and has experienced suicidal thoughts.

Insufferable woman gets banned for life from pool that welcomes everyone