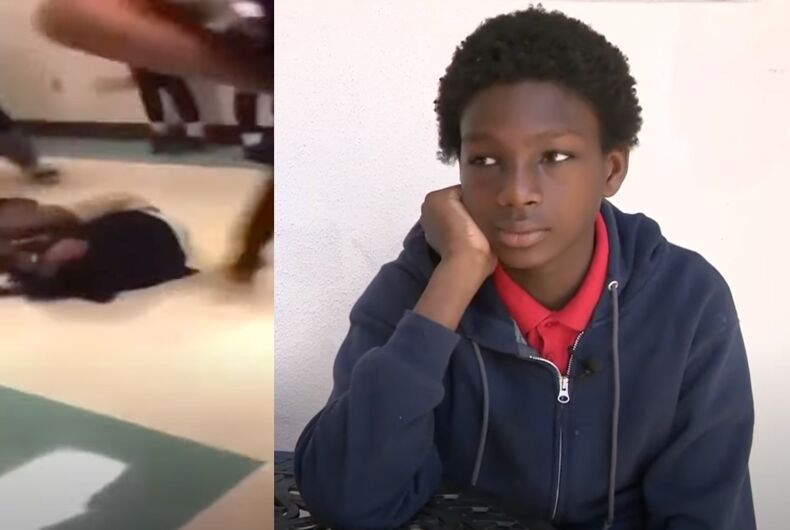 The video shows Chad Sanford being surrounded and attacked by a classmatePhoto: Composite

13-year-old Chad Sanford spent his sixth-grade year in “a living hell,” he says, because other students tormented him for being gay.

A shocking video of Sanford being picked up and slammed to the ground while other students watch and cheer is finally shining a light on the school’s bullying problem, but it’s a little late for the out middle schooler.

In the video, Sanford’s classmates surround him in the hallway, as one approaches from behind, lifts him off the ground, and hurls him back to the floor.

“He just stepped on my face, they were kicking and spitting on me and all that was a little clip of the video,” Sanford told local news. “They were screaming. They were saying, ‘We got that gay faggot.’”

“One day he embarrassed me in front of everybody. He stood on top of the stage and said to me, ‘I’m going to knock the gay out of him.’”

Sanford’s grandmother and aunt are expressing outrage and disappointment in the school district. He has been pulled out of the school after the attack.

“He wanted to kill himself because they keep bullying him,” his aunt, Raquel Showers, said. “Hearing that, it just makes me cry.”

The Broward County Public Schools issued a rote statement that “school safety is our highest priority.” The school says they will discipline the student “in accordance with the codebook for school conduct.” The Broward Sheriff’s Office says that despite the video evidence of the attack, no arrests have been made.

Multiple bills filed by Republican state legislators specifically targeted LGBTQ youth. One would have required girls to undergo genital exams before being allowed to play school sports to prove they aren’t transgender. None have passed both chambers of the legislature.

Arkansas sued for banning trans youth from getting health care