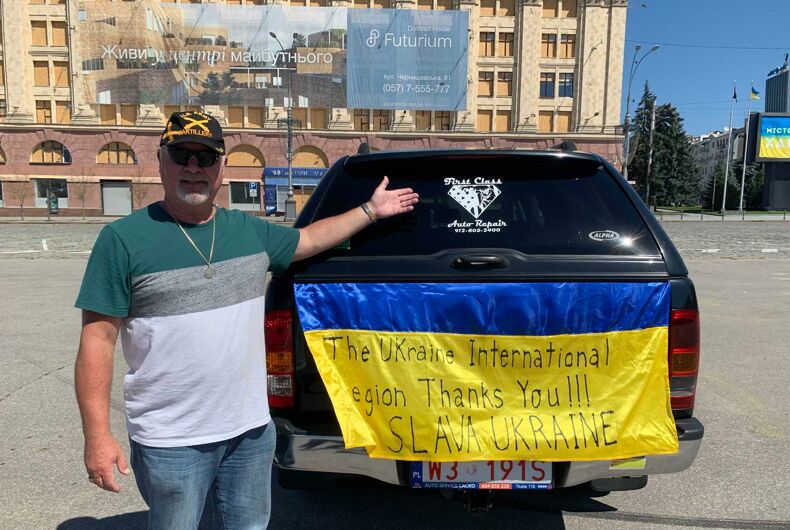 Rockets landed close enough that the putrid, blackened smoke swirled towards the Toyota 4×4, as water, pooling rapidly in holes formed by artillery shelling and mortar blasts, splashed around the truck as we dipped and dodged the chaos on our way to a frontline Ukrainian hospital just minutes from the Russian border.

This story of queer acceptance is the story of John Morrison, lawyer, US Army veteran, and donor to Ukraine’s International Legion. A gay son. A queer daughter married to a transgender partner. And the father who loves them all? He’s a 63-year-old white man from a small town in Georgia.

As I piloted the truck to our destination, Morrison sat in the passenger seat exuding a calm and collected presence. From Mount Vernon, Georgia, and speaking with a gentle southern accent and in a measured tone, Morrison’s assuredness in the face of war was clear, yet when the topic turned to his LGBTQ family, his voice broke on a number of occasions and confidence waned that he was interacting with them in the right way.

Ultimately, during our three days together and numerous conversations that turned to queer life, I found a man who broke every stereotype regarding the love and acceptance of his kids, and the greater community as a whole.

He mentioned his son is gay in what was at first a passing conversation. I was immediately taken back by his laissez-faire attitude to my questions, but as the conversation veered toward the moment when Morrison found out, his eyes turned slightly red and his demeanor turned serious.

“Finding out my son was gay was the greatest thing for our relationship. Over the phone,” he said, “he revealed to me that he was gay.”

Then Morrison recounted how his son explained that he held it in until that moment out of fear of rejection.

“I didn’t hesitate. I immediately told my son that I loved him with all my heart and that would never change.”

He followed up that profession of love by making certain his newly out gay son knew one important truth.

“I told him that there was absolutely nothing wrong with being gay.”

From that moment on, he explained, “My son and I began to rebuild our relationship. I love my son and am so proud of him.”

The next recollection from Morrison was a memory equal parts funny and adorable, “I was proud to take my son to the first gay bar he ever went to. I was even flattered when I got a few interested smiles.”

“I hope my son finds a man who he can fall in love with. I hope he can raise children of his own. I just want him to be happy with who he is and have a full, well-rounded life.

While he broached the topic of his boy early on, it was well into Morrison’s trip to Kharkiv that he mentioned, again in passing, that his daughter was married to a transgender woman.

Once more the conversation veered into his relationship with his daughter and her trans spouse. Giving some background on the domestic situation, he admitted that he had harbored some fears when he found out that the transition was going to take place.

“They have a child together and my daughter-in-law is currently on active duty in the Army. I was worried how her decision to transition would affect her time in the service.”

Pausing, he thought of the words to describe his daughter-in-law, “I have to say that she is very brave to take such a bold step while in the military. I’m proud of her.”

Morrison then made clear his admiration for their now queer-identifying marriage.

“I’m very proud of my daughter for supporting and loving her wife through such a tough time. They must have a very strong love for each other and I admire that in both of them.”

Before his daughter’s revelation, he admittedly didn’t think much about the details of a person’s gender.

“I can’t say that I gave a considerable amount of time thinking about the particular difficulties that trans people face. In South Georgia, I have only met a few trans people and was never close friends with any of them, I have had several very close gay and lesbian friends but being trans is a very distinct issue on many levels. For most people, it seems gender identity is a simple thing, however for some people this is just not the case.”

After acknowledging the difference between gender and sexuality, Morrison had this to say about sexuality in general.

Morrison, who currently practices law throughout Georgia, including in heavily rural areas and Atlanta, made clear that although diverse gender and sexuality now have a place in family life, it has never mattered when it came to his law practice.

“I have represented people from all walks of life, I don’t care what their race or sexuality is. The only thing I will not do is represent people who are hateful. As a private attorney, I don’t have to accept a client if I don’t want to, and I will not represent a racist, sexist, or anyone who espouses similar beliefs.”

Being a champion of Ukraine in its worldwide battle for liberty and freedom, and having played a role in the United State’s political arena as an appointed judge, Morrison spoke from his uniquely positioned vantage about the big issue facing the US.

“America is at a major fork in the road. The evangelical right wants to drag the US into a theocratic form of government where they can impose their religious views on others. The (red) states’ aim is to roll back the progress America has made with LGBTQ rights and women’s rights. Thankfully the left is fighting back and even moderates and moderate conservatives don’t want any part of that crap.”

As his short sojourn to Ukraine’s northeast wound up, Morrison finished his multiple-day conversation with LGBTQ Nation by opening up on the greater risks facing the world at large.

“I’m 63. I regret not being able to join the heroes at the front but my spirit is more willing than my body right at the moment. This war is such a clear and distinct fight between good and evil, right and wrong. The people of Ukraine are spectacular. I’ve seen openly gay couples who don’t get a second glance,” he said. “The people here in Ukraine care about how much dedication a person has to democracy and freedom not what their gender or sexuality is.”

Packing up to head back to Poland, Morrison sent this last missive, containing advice about equality, and a parent’s love.

“Love your child no matter who they are. Every child deserves and cherishes the love of their father. No child chooses to be gay or trans. They just are who they are. Your support in an already difficult situation can be the difference between them being happy or having a life that is a living hell. Remember, it’s about them, not about you.”

A trans teen was brutally beaten on camera. It’s the second time it has happened to her.