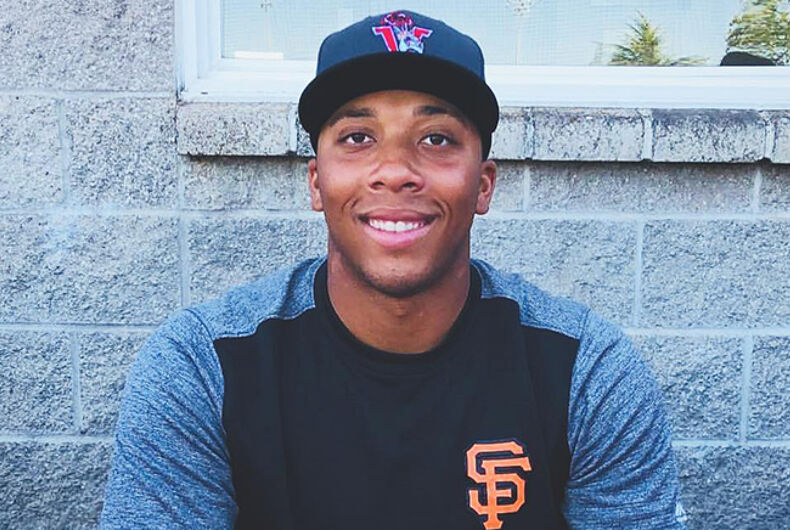 Minor league baseball player Solomon Bates came out as gay on Tuesday after being cut by the San Francisco Giants.

“Being gay in this sport you don’t know what comes at you!” said Bates in an Instagram post.

The 25 year-old relief pitcher, who’s been out to fellow players since 2019, took advantage of his unexpected release from the Giants organization to get personal.

“I thank the Giants for giving me the opportunity to be myself and go out there and play the game that I love the most. I’m still in shock on what just happened. But I’m not giving up on what I want to do.”

Bates was an eighth-round draft pick out of USC when the Giants picked him up in 2018. He’s been pitching for the organization’s farm teams since, mostly with Richmond’s Flying Squirrels. His last game was Friday.

While no active Major League player has come out as gay, two retired players have: former outfielder Billy Bean, now MLB’s senior vice president for diversity, equity and inclusion, and former Dodgers and A’s hitter Glenn Burke both came out after their playing careers ended.

“Solomon has made a lasting and important impression on his teammates over the course of his college baseball and Minor League career,” Bean said in a statement. “I appreciate his decision and courage to share this part of his story with baseball and our fans.”

“The San Francisco Giants organization is extremely proud of Solomon for the courage he displayed in coming out and we support his decision to live his life proudly and openly,” the team said in a statement. “We applaud the example he is setting for those in the game of baseball and beyond.”

Bates logged a 4.02 ERA over 23 relief appearances with Double-A Richmond in 2022 before being released on Tuesday.

“I haven’t been out as my complete self because I’ve been hiding myself,” he told Outsports in an interview after the cut. “I’m a masculine man who loves the sport of baseball, and now I want to open up doors for gay athletes like me.”

“I’m just thinking about my next team,” Bates added. “Life is good right now. I’m confident I’ll be with a new team in the next few days.”