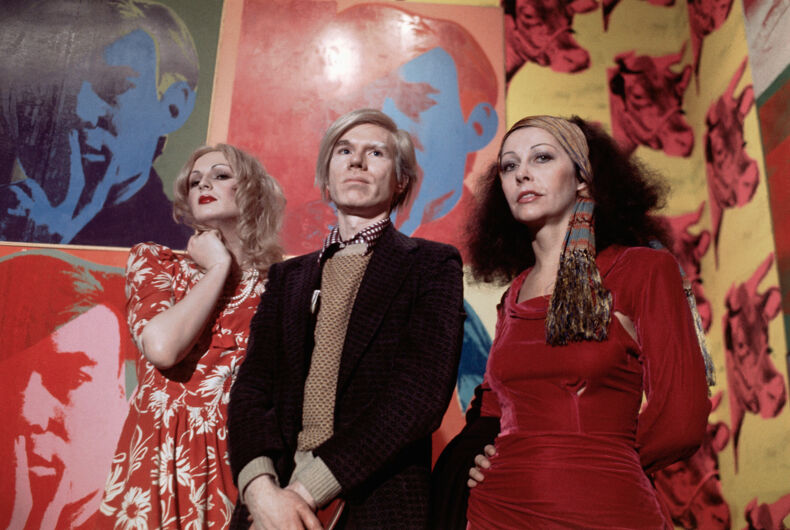 4/29/1971- New York, NY- Andy Warhol and superstars (l) Candy Darling and (r) Ultra Violet are shown at a press conference. Andy is being interviewed in the Whitney Museum where an exhibit of his works is being shown. On the wall is his "cow" wallpaper and self-portraits.Photo: Bettmann Archive

Trans model and actress Hari Nef just announced that she is set to star in a new biopic on the life of Candy Darling. During her brief stint as an Andy Warhol muse, Darling quickly garnered the intrigue and affection of other artists, writers, photographers, and musicians and later came to be known as one of the first true trans icons.

But what made Candy Darling such a fascinating figure? What was it that drew so many influential creative people to her? Here, we explore the life and work of LGBTQ icon Candy Darling and discuss the upcoming biopic starring Hari Nef.

Who Was Candy Darling?

Candy Darling was born on November 24, 1944, in Queens, NY to James and Theresa Slattery. When Darling’s parents split up, she and her mother moved out to the suburb of Massapequa Park, Long Island, where she experienced relentless bullying for her effeminate nature and appearance. Darling was assigned male at birth but identified as a woman, so she frequently donned women’s clothing even though cross-dressing was illegal in New York at the time.

Growing up, Darling was obsessed with old Hollywood glamor and idolized the likes of Joan Bennett and Kim Novak. These two served as the blueprint for Darling’s persona and artistry – an ethereal goddess that turned heads just by walking into a room.

A post shared by The Andy Warhol Museum (@thewarholmuseum)

Darling’s dream was to be an actress, just like the women she idolized and modeled herself after. Throughout the ‘60s, she spent a lot of time in the gay bars of Manhattan, rubbing shoulders and eventually working with artists and playwrights like Jackie Curtis, who later became a fellow Warhol superstar.

Darling and Curtis first caught the attention of Andy Warhol after the legendary artist saw the two in Glamour, Glory and Gold, a play written and directed by Curtis and starring Darling as Noona Noonan as well as a young Robert De Niro. Shortly after, the two girls were invited to star in Warhol’s 1968 film Flesh, directed by Paul Morrissey.

In 1971, Darling achieved her Hollywood dreams after taking the lead role in Warhol’s Women in Revolt. The film premiered at the Cine Malibu in February 1972 to much fanfare, including protests from radical feminists who felt the film’s message ran counter to the women’s liberation movement.

Darling was a charismatic performer who, as crime author Truman Capote famously noted, had an undeniable “aura” to her. This, along with a steadfast desire to become a star, helped her land roles in several independent films and Off-Off Broadway productions.

“I’ve had small parts in big pictures, and big parts in small ones,” she once said.

Some of Darling’s notable works include appearances in the 1971 films Klute, Lady Liberty, and Some of My Best Friends Are…, as well as Jackie Curtis’ play Vain Victory: The Vicissitudes of the Damned.

Her big break was supposed to be her starring role in Tennessee Williams’ play, Small Craft Warnings. But just two years later, Darling passed away from lymphoma at the age of 29. Apparently, the hormones she had been taking to transition were cancerous – something she was aware of before getting sick.

What We Know About The Upcoming Biopic

Earlier this month, Deadline announced that the producers behind the upcoming Candy Darling biopic had found their Candy. Trans model and actress Hari Nef will portray the cult icon – a role which Nef says in an Instagram post is “the ultimate – that pipe dream so specific it felt silly to speak out loud”.

“Candy darling is the blueprint: a transsexual glamour girl and indie icon reigning over Warhol’s Manhattan and Nixon’s America,” Nef adds. “She burned fast and bright. More than anything, she wanted to be taken seriously as an actress. She taught girls like me how to dream – perhaps even how to be at all…It’s the honor of my life to get the chance to play her on the screen, where she remains.”

The biopic will be written by Transparent writer Stephanie Kornick and produced by Zackary Drucker, Christian D. Bruun, Louis Spiegler, and Katrina Wolfe.

Although relatively unknown during her lifetime, Candy Darling has since become an LGBTQ icon, inspiring drag queens and trans women around the world with her larger-than-life personality and ability to captivate audiences with just one look. We’re excited to see her story brought to life on the big screen in the upcoming biopic!