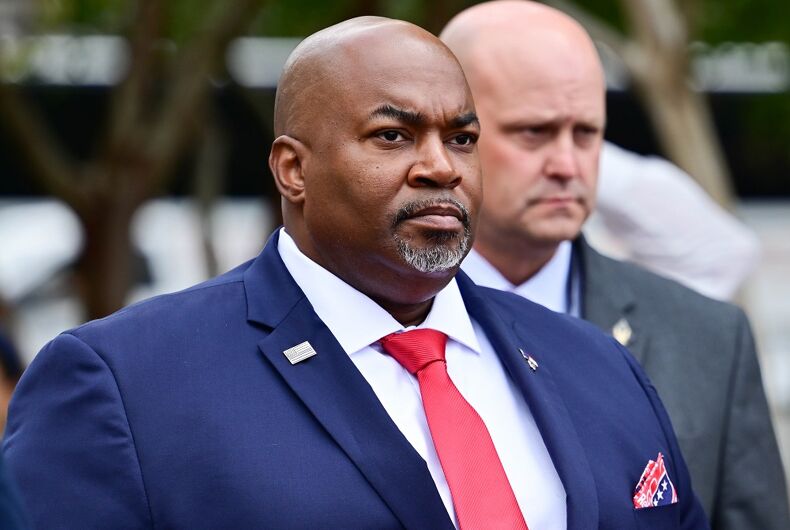 In his soon-to-be-released memoirs – entitled We Are the Majority: The Life and Passions of a Patriot – he railed against kids learning about history in first through fifth grade.

“Guess what? Most of the people of North Carolina know global warming is junk science,” he wrote. Whether or not most people in North Carolina believe it, there is scientific consensus that the planet is warming.

Robinson also attacked the state Board of Education, saying the state should “get rid of it.” He also said that “traditional public schools might be a thing of the past” because of charter schools.

“We need to build more, not limit them,” he wrote. “And if we find success along the way, we should bring it into the system. We might adopt charter school methods throughout the system.”

Robinson got national attention last year when his extreme anti-LGBTQ rhetoric during sermons at a local church were made public in online videos.

In one sermon, he compared gay people to maggots and said that maggots at least have a “purpose.”

“These people are superior because they can do something these people can’t do,” Robinson said, referencing having a child. “Because that’s the way God created it to be. And I’m tired of this society trying to tell me it’s not so.”

In another sermon, he called homosexuality and trans identity “filth.”

“I’m saying this now, and I’ve been saying it, and I don’t care who likes it: Those issues have no place in a school. There’s no reason anybody anywhere in America should be telling any child about transgenderism, homosexuality — any of that filth,” Robinson said, “and yes, I called it filth. And if you don’t like it that I called it filth, come see me and I’ll explain it to you.”

And he didn’t back off of LGBTQ issues in his book, writing, “Gay marriage is not marriage either in the eyes of God or even by definition.”

“But I don’t believe you should come down to the school, most especially the elementary schoolhouse, and teach kids about what you do in the bedroom, as if your sexual preferences and practices ought to be celebrated and govern government approval and even support,” he wrote.

In another part of his upcoming book, Robinson attacked Pride and said that minors can’t be gay.

“Telling a child, ‘Oh, you’re gay,’ or dressing a kid up at the gay pride parade in a fairy costume with a pair of rainbow flags—using kids like that is demented,” he wrote. “You shouldn’t let them walk around seeing men with their butts hanging out.”

Robinson attacked transgender people: “Someone who is troubled in this way has something wrong with their brain.”

Robinson also opposed abortion. He went so far as to compare it to murder: “It’s no different than, for instance, me killing my neighbor because he’s standing in the way of me having a job that I want.”

He also wrote that Black people are trying to be “a victim forever.”

“Have you been a victim of wrongdoing?” he wrote. “Yes. But you were victorious over that. Somebody was victorious over that on your behalf. There’s no reason for you to look at yourself in the mirror and think you are a victim. You’re a receiver of benefits because of what people who came before you did. You should be a benefactor for others.”

Get to know Candy Darling, the late superstar played by Hari Nef in upcoming biopic