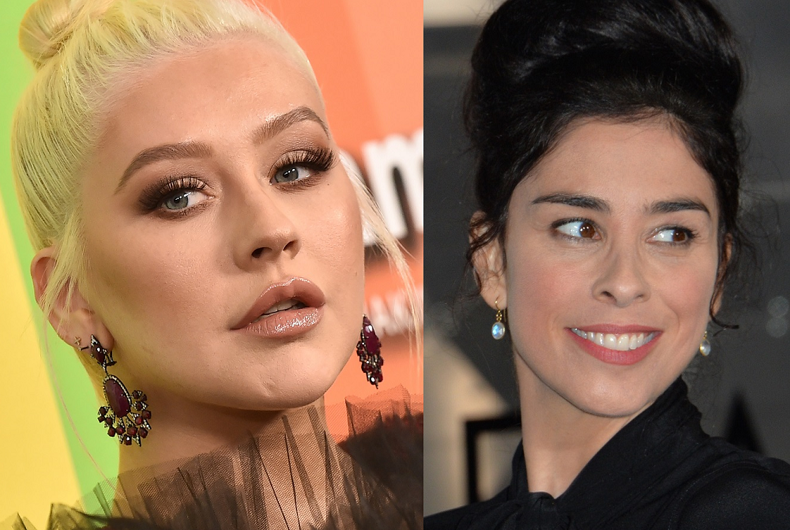 Over the weekend, Christina Aguilera and Sarah Silverman both called out the GOP for its recent wave of attacks directed at the LGBTQ community in epic fashion.

While performing at Brighton Pride in the U.K., Aguilera took a stand against Florida’s infamous “Don’t Say Gay” law. Officially known as “Parental Rights in Education,” the law, which was signed by Gov. Ron DeSantis (R) in March and took effect July 1, bans instruction on sexual orientation and gender identity in kindergarten through grade three and restricts instruction on those topics that are not “age appropriate or developmentally appropriate” in other grades.

During Aguilera’s performance of her song “Glam,” a video montage describing the law’s effects and back-up dancers held up signs reading “Say Gay.”

“I don’t feel like I’m generalizing anymore. If you’re a part of the GOP, you’re fucked up,” the comedian said, alluding to the Florida law as well. “What they’re doing to teachers, educators, calling them groomers or, you know, pedophiles. Again, I told you, this is all part of their plan. They want kids out of schools. They don’t want an educated population.”

The term “groomer” has become an increasingly common way for those on the right to mischaracterize LGBTQ people as abusers.

Silverman went on to blast Republicans for sexualizing the queer community. “You’re sexualizing them in a way that you would never think to sexualize straight people.”

Under “Don’t Say Gay,” Florida teachers have reported that they are now afraid to even mention their same-sex partners.

“Stop being perverted, you fucked up Republicans. Leave these people who are teaching your kids, God bless them, the fuck alone!”

“Spot on. I’ve been raging about the oversexualization of queer people for as long as I can remember! It’s the epitome of homophobia and it’s a top priority for the GOP – it has had disastrous results. For this reason marriage equality and queer parenthood are their worst nightmares and they won’t stop until they’re not the law of the land.”

Conservatives sue school for refusing to out transgender students