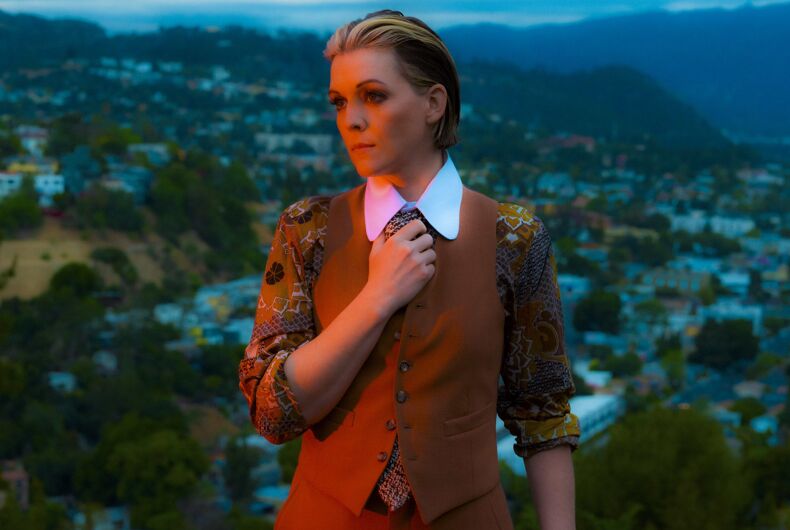 Six-time Grammy Award winner Brandi Carlile recently had something of a rude awakening about the impact legislation like Florida’s so-called “Don’t Say Gay” law could have on her own family.

In a new profile, the singer-songwriter tells Billboard Magazine about a project her daughter Evangeline was assigned at school in Washington State, where Carlile lives with her wife, Catherine Shepherd, and their two daughters. The seven-year-old was asked to fill a poster with information about her family.

Related: Brandi Carlile hid Ellen’s coming out episode on a tape labeled with her boyfriend’s name

“I suddenly realized,” Carlile tells Billboard, “that whole thing was against the rules in Florida. I don’t want that to be the reality for my child—but I don’t think there’s a difference between my child and anybody else’s.”

“Classroom instruction by school personnel or third parties on sexual orientation or gender identity may not occur in kindergarten through grade 3 or in a manner that is not age-appropriate or developmentally appropriate for students in accordance with state standards,” the law states. It also gives parents the right to sue school districts for violating the vague policy.

Another consequence of the new law, opponents say, is that public school teachers in Florida who identify as LGBTQ would effectively be forced back into the closet, and the children of same-sex couples, like Carlile’s, would not be allowed to discuss their families.

Carlile came out publicly in 2002. She met Shepherd in 2009, and the couple married in 2012, in Massachusetts, where same-sex marriage was then legal. The couple have two daughters, Elijah and Evangeline.

The singer says that the realization about her daughter’s school project inspired her to delay the planned release of a new sparkling rosé through her boutique wine label, XOBC.

“I woke up to yet another anti LGBTQIA+ headline, once again targeting queer kids and it made me want to pause,” she wrote in an Instagram post on March 11, the day the Florida bill was signed. “I don’t want to minimize the very real problems we face as a community by posting about sparkling rose in the midst of such turmoil.”

“I need to acknowledge that so many queer people are facing an internal struggle to combat the constant infringements and erosion of our rights.”

Originally slated to hit the market in March, 100% of the profits from the Proud Sparkling Rosé are now benefitting organizations fighting the stultifying number of anti-LGBTQ laws making their way through Republican controlled state houses across the country.

Fans “expect a certain level of thought that goes into everything Brandi lends her name to,” Shepherd, who serves as the executive director of Carlile’s non-profit, the Looking Out Foundation, says of the decision.

Carlile launched the Looking Out Foundation with bandmates Tim and Phil Hanseroth in 2007, to help give back to causes she believes in. When she tours, $2 from every ticket sold go to organizations like the Trevor Project, and proceeds from XOBC benefit LOF.

Despite the troubling state of LGBTQ rights in America right now, Carlile is still psyched for Pride. “Happy Pride everyone!!” she posted on Instagram this week. “I cannot stress enough how much I love June.”