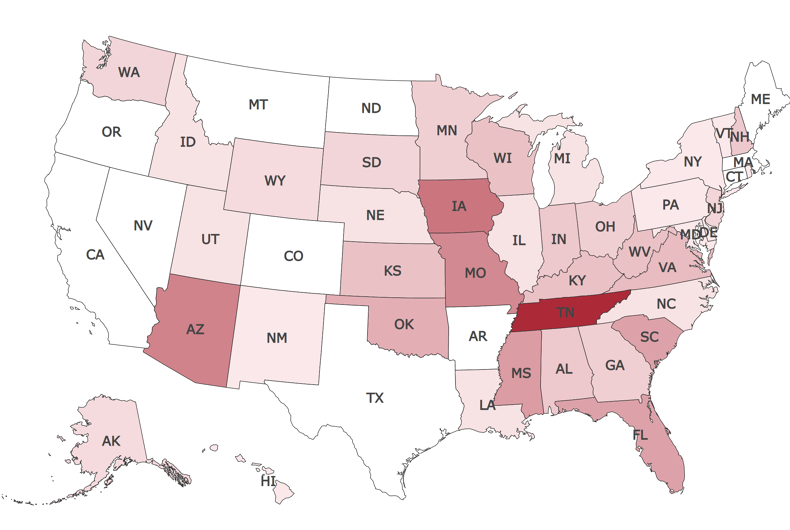 Nearly a dozen anti-LGBTQ bills are scheduled to go into effect today in states across the U.S. Alabama, Florida, Indiana, South Dakota, Tennessee, and Utah will all see restrictions placed on trans athletes, bans on LGBTQ topics in public schools, and other laws.

More than 300 anti-LGBTQ bills have been introduced in state houses across the county this year. Over two dozen have passed, and ten of those go into effect today—a grim record for 2022. According to the Trevor Project, July 1 represents the single day when the most anti-LGBTQ bills will be implemented this year.

“We’ve already seen the impact of debating bills targeting our young people,” Sam Ames, director of advocacy and government affairs for The Trevor Project said. “85% of transgender and nonbinary youth say recent debates about state laws restricting the rights of transgender people have negatively impacted their mental health. And now, LGBTQ youth will have to face the reality of these harmful bills being enacted into law, waking up to find they are no longer able to say who they are at school, safely use the bathroom, or play sports with their friends.”

One of the laws taking effect today is Florida’s infamous HB 1557, commonly known as the “Don’t Say Gay” bill for its ban on any mention of LGBTQ issues, people, or history in kindergarten through third grade. The bill, which Gov. Ron DeSantis (R) signed into law earlier this year, has provided a template for similar laws across the U.S., some of which go into effect today as well.

Florida’s so-called “Stop Woke Act” also takes effect today. The law aims to limit the instruction of topics related to the history of racism in the U.S.

Florida’s new laws may be the most high-profile, but they certainly aren’t the only anti-LGBTQ laws taking effect today. In Alabama, HB 322 will restrict transgender students from using bathrooms and locker rooms that align with their gender identity and ban instruction of LGBTQ topics in schools, similar to Florida’s law.

Bans on transgender women and girls competing in sports take effect in both Indiana and South Dakota. South Dakota’s HB 1012 will also place restrictions on LGBTQ topics in higher education.

In Tennessee, a total of three anti-LGBTQ laws take effect today. Two are aimed at limiting trans participation in sports, while a third restricts LGBTQ materials available in schools. And yet another law banning transgender women and girls from participating in sports takes effect today in Utah.

“Pride Month may be over, but the fight goes on,” Ames said. “We enter July with a reminder that the LGBTQ community is part of a legacy of resistance and resilience. And we call on every elected official, company, community member and leader who wore a rainbow flag yesterday to make good on that commitment today. It will take each of us working together to build a safer, more affirming world for LGBTQ youth.”

Being alive is your number one civic duty. Your mental health is as important as your vote.