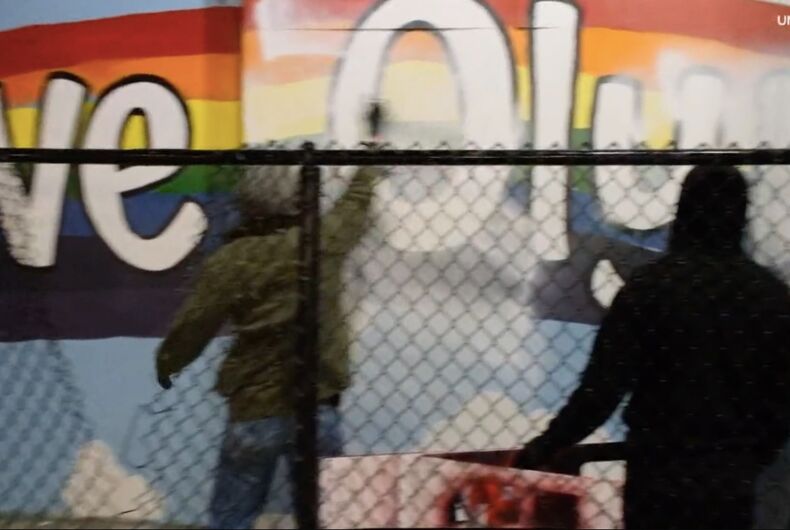 Video of white nationalists defacing an LGBTQ community mural in Olympia, Washington has helped lead to criminal charges against two of the group’s alleged members. One now has a warrant out for his arrest, and more arrests could be on the way. Both men were among 31 group members arrested in June for trying to disrupt a northern Idaho Pride event.

Police said that video of the vandalism — taken on October 16, 2021 — and a video of a pre-vandalism “test run” in the area helped them identify 20-year-old Spencer Thomas Simpson and 23-year-old Colton Michael Brown as suspects. The men are both believed to be members of Patriot Front, a white nationalist hate group, according to the Southern Poverty Law Center.

The October 16 video shows six men in dark clothing and facemasks defacing the rainbow-colored mural, which had the words “Respect & Love Olympia” written upon a rainbow, painted onto the side of a city-owned building. The mural was installed in 2014 after anti-gay hate crimes had occurred in the area. The Patriot Front vandals defaced the mural with white spray paint while two other masked men patrolled the nearby streets.

Both Simpson and Brown now face charges of “aiding and abetting or ‘complicity with’ graffiti,” though prosecutors said they could pursue hate crime charges if they find that anti-LGBTQ animus led them to deface the mural.

In a supplemental report, Olympia Police investigator Jacob Theis wrote, “It is evident that the vandalism was an act of discrimination and an offense against the LGBTQ+ community in Olympia.?

In mid-July Simpson pleaded not guilty to the graffiti charges. He is currently out on bail, though the judge said he cannot contact Brown directly, only Brown’s lawyer. Brown, meanwhile, didn’t show up to his court arraignment. The judge issued a warrant for his arrest with a $1,000 bail attached.

In a leaked October 3, 2021 audio chat, Simpson and other suspected Patriot Front members allegedly discussed the vandalism of a George Floyd statue in New York City. Discussing the incident, Simpson allegedly said, “You show people that you can do something like this, and you can get away with it, it encourages other people to do something.”

In a leaked October 8, 2021 audio chat, Brown and others allegedly laid out their plan to deface the Olympia mural. In the chat, Brown said that the mural needed a fence “to protect it because people don’t like fa***try.”

In a leaked October 10, 2021 audio chat, Brown allegedly told Patriot Front members to serve as lookouts, intimidating passers-by, and smashing the phones of anyone who tried to record their actions. He also allegedly told group members to leave their personal phones at home so the geolocation tracking data wouldn’t place them at the scene of the crime.

Brown reportedly told several members of the group to act as lookouts, intimidate any passersby who notice the group painting over the mural, and also to steal and smash any cell phones that onlookers might use to try to record the vandalism. It’s ironic that the group’s own videos of the vandalism helped lead to their members’ arrests.

Both Simpson and Brown are also facing conspiracy to riot charges in Idaho after they were among 31 Patriot Front members arrested in June. The arrest disrupted the group’s alleged plan to disrupt a Pride event in Coeur d’Alene, Idaho.

Photos and video of the arrests showed the 31 men dressed in a uniform of identical khaki pants and dark blue shirts and wearing masks. The men were armed with what appeared to be homemade riot gear and at least one smoke grenade, according to multiple media reports.

“This event must serve as an alarm to the violent, anti-LGBTQ+ hate that is brewing across the country and showing up not just on the fringes but in state legislatures,” Rep. David Cicilline (D-RI), Chair of the Congressional LGBTQ+ Equality Caucus, wrote in a statement about the group’s June arrest.