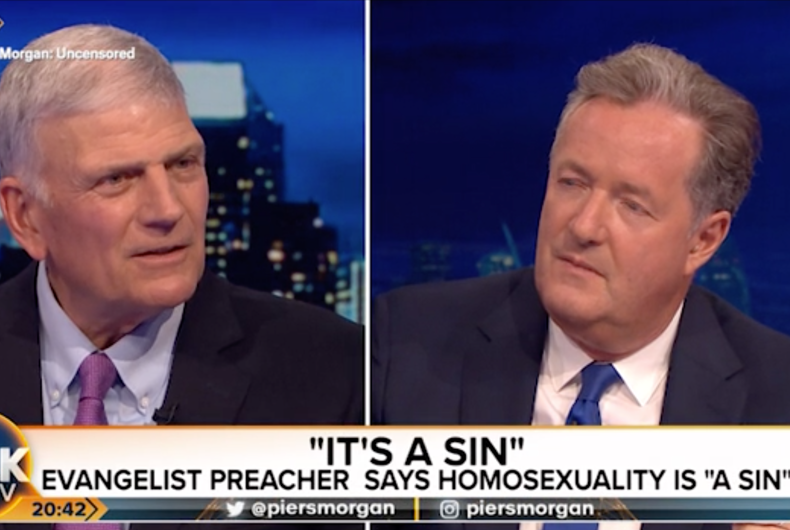 That’s the message from anti-LGBTQ evangelical leader Franklin Graham about same-sex relationships, same-sex marriage, and sex between two men or two women in a new interview with Piers Morgan.

Graham, the fire and brimstone-breathing son of a preacher man Billy Graham, is on tour in the U.K. and stopped by Morgan’s new talk show Piers Morgan Uncensored to share his message of intolerance.

“Your tour is called ‘God Loves You,'” Morgan says. “Why do you think it’s Christian to stigmatize gay people?”

“I don’t stigmatize them.”

“You call them sinners.”

“We’re all sinners,” Graham parries. “For us to be forgiven we have to come to God and turn from our sins.”

Morgan pressed the point that Graham believes being gay is a sin.

Morgan suggests the Bible is full of “all sorts of things that we don’t do now,” but Graham asserts he believes in the Bible “from cover to cover.”

“The Bible has stuff in it that would be absurd today,” Morgan continues.

“No, I believe the Bible to be the word of God.”

Graham says “Jesus straightened that up” and recalls the story of a woman brought before him to be stoned for adultery.

Jesus told her to “go, and sin no more.” 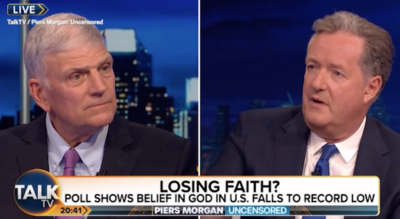 Morgan suggested that plummeting belief in God and organized religion in the U.S. may be related to the church’s views on LGBTQ people, and a reason religion “is going out of fashion with younger people.”

“God made us male and female. And he designed sex to be between a man and a woman. That’s the way God made us and created us and that’s just the way it is.”

“God loves homosexual people, he loves all of us,” says Graham. “I love them enough to want to warn them and tell them the truth.”

Graham has long been known for speaking out against LGBTQ people. In October, he  praised North Carolina Lt. Gov. Mark Robinson (R)  for “having the guts to stand up and tell the truth.” Robinson called LGBTQ people “filth”.

Around the same time, Graham called for foreign nations to deny people with official gender-neutral markers on their passport, and the Billy Graham Evangelical Association (BGEA), which the son runs, was named in a report as a group materially supporting proposed law further criminalizing LGBTQ people around the world.

Morgan added: “You’re entitled to your views, but I think one of the reasons religion is becoming less popular is because young people look at senior figures like you and think, ‘That doesn’t sound very Christian to me, that sounds to me like somebody who is homophobic.’”

Viewers of the show may be surprised to see Morgan defending LGBTQ equality on his new show. Last week he had singer Macy Gray on his show and they denounced transgender identity. Gray complained about pronouns and said that “boobs” are requires to be a woman (as if no trans woman has breasts) and Morgan complained about trans women in sports.

But he doesn’t appear to have the same contempt for gay people.

Barbaric “gay tests” are still victimizing men across the world