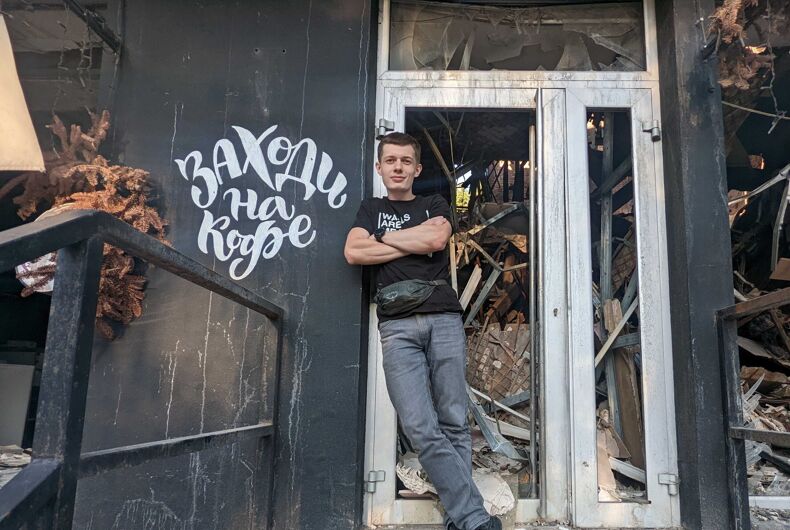 Denys Volokha returned to Kharkiv after months away to find the city destroyed but his work was just getting started.Photo: Sarah Ashton-Cirillo

Their lineage dates back to the days of the Soviet Union; operating under the name “Memorial” it was the first human rights group recognized by the USSR. Now more than 30 years and one name change later, Kharkiv Human Rights Protection Group (KHPG) continues its mission of protecting freedom, the disenfranchised, and minority groups throughout Ukraine.

While Ukrainian forces have been battling Russian fascism for almost a decade, KHPG’s responsibilities have rapidly evolved since February 24, when Russia’s full-scale invasion started and the nation’s president, Volodymyr Zelensky, declared martial law.

A portfolio of work that includes pushing freedom of speech claims, fighting government discrimination, and lobbying for laws that increase liberty for all Ukrainians, has been expanded to include investigating war crimes carried out by the marauding Russian army.

Upon his return to the group’s namesake city after months of displacement, KHPG press director, Denys Volokha, sat down with LGBTQ Nation to discuss the organization’s long history, its newest mission, and why the war has been helpful for queer rights in Ukraine.

Slight, with an air of heavy wisdom, and a whisp of chin hair, Volokha twice attempted to sign up to fight for his country; both times he was told to focus on his civilian work. Now three years into his stint as the media guru of KHPG, the 22-year-old wunderkind’s patriotic fervor is matched by his ardent support of free speech and dedication to the rule of law.

Near the beginning of our conversation, Volokha brought up an issue previously reported by LGBTQ Nation that KPHG is currently focused on. In the Mariupol area, investigators working with KPHG found that the marauding forces used hunt lists to subjugate, capture, and in some cases murder, Ukrainians who were deemed high-value enemies. When asked if that included the LGBTQ community, Volokha, refused to confirm exactly who was on the lists, but did say it wouldn’t be a “surprise” if they included LGBTQ people who were out.

Moving further into the realm of LGBTQ casework by KHPG, the young crusader shared several case files with LGBTQ Nation. Each held its own set of horrors.

One event, in 2021, took place in an eastern Ukrainian city.  A man identified as “T” encountered the local police. Upon telling them he was a member of the LGBTQ community they proceeded to sit on his shoulders and twist his arms, pinning him face down on the floor until he lost consciousness. The injuries T received resulted in his hospitalization. Upon his release, harassment from the police continued, and that’s when KHPG stepped in, bringing T’s complaint, including a victim’s statement, to the State Bureau of Investigation for an independent review of the police brutality.

Another matter involved an attack on a transwoman, by three known assailants. The beating was so bad that the victim required medical treatment and, almost immediately after, filed a police report. Records show that despite receiving the woman’s affidavit, investigators sat on the case. Eventually, after the curious inactivity and significant lapse in time had passed, KHPG took the matter directly to the Ukrainian Parliament Commissioner for Human Rights, as well as to the state prosecutor. After months of motions and procedural issues, the court ruled in favor of KHPG’s client, finding that the investigator’s inaction was negligent, and the prosecution resumed.

Discussing how life will change for the queer community after the war in light of Ukraine’s past reputation of neglecting or persecuting queer citizens, Volokha was hopeful.

The afternoon he sat down to speak with us, word came that President Zelenskyy would have to address a petition demanding that Ukraine recognize same-sex marriage.  When asked if he felt that the President and lawmakers would try to use regulations under martial law to sidestep it, Volokha suggested that “this is a moment for Ukraine to show Europe we belong to the EU, to the international community.”

When pressed on it, Volokha was confident that one of the few positive outcomes of the devastating war, would be a lasting commitment by Ukraine to drag those living in the reactionary past into a future where all are welcome.

Born nearly 10 years after the fall of the Soviet Union, and his nation’s declaration of independence, Volokha revealed himself not so much as an activist for gay rights, or minority inclusion, as a classical liberal steeped in the words, and thoughts, of men who came centuries before him.

Waxing poetically several times about the First Amendment to the United States Constitution and how free speech should, in his words, “never be abridged,” Volokha is prepared to lead the fight for every Ukrainian’s civil rights in the face of Russia’s invasion and Putin’s fascist propaganda.

“No,” he said, “We appreciate America, and what it stands for, but we are Ukraine’s voice for liberty.”