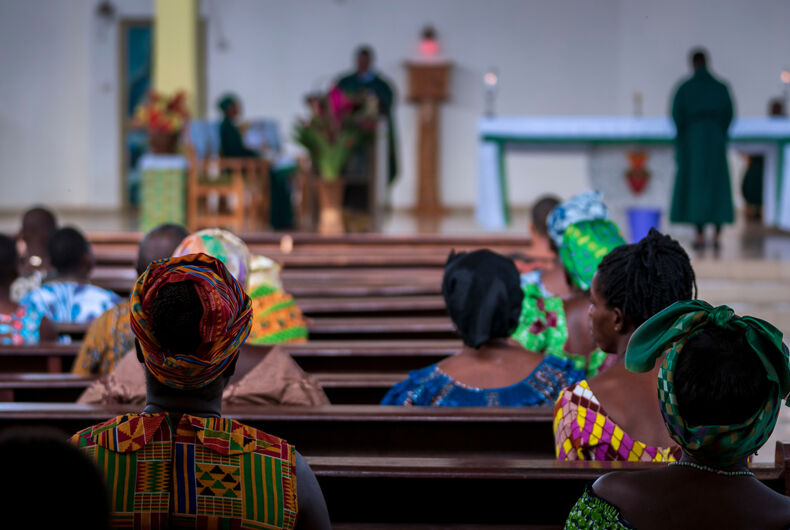 There is a bill in Ghana that LGBTQ advocates are calling the “most homophobic document the world has ever seen.” If passed into law, it would increase criminalization against LGBTQ people, potentially sentencing them to death.

Homosexuality is already illegal in the majority-Christian country, and the new bill would increase the maximum prison sentence for homosexuality from three to five years.

The new law against LGBTQ people would also put people at risk for prosecution for associating with LGBTQ people, which led one Ghanaian publication to say it “compels Ghanaians to police gender and sexuality in their homes, workplaces, and everyday lives.”

One legislator is so fervent about passing this bill that he has threatened to storm Parliament with 10,000 people if the bill doesn’t pass through.

There are other groups that are fervent about passing this bill as well, many of which are evangelical groups in the United States.

A CNN report exposed that one of the groups behind Ghana’s LGBTQ death penalty bill was a group known as the World Congress of Families (WCF), a group formed from an alliance of conservative organizations from the United States and Russia after the fall of the Soviet Union. The WCF is deemed a hate group by the Southern Poverty Law Center.

World Congress of Families is led by Brian Brown, the leader of the National Organization for Marriage who made his name during California’s Prop 8 initiative to stop marriage equality in California.

Their influence has spread past the U.S. and Soviet Union, however.

A 108-page report by Secretary of the European Parliamentary Forum on Sexual and Reproductive Rights Neil Datta shows the World Congress of Families is one of the largest funders of anti-LGBTQ groups in Europe, particularly in nations like Hungary, Croatia, Georgia, and Italy.

Datta says several pieces of legislation and petitions in Eastern Europe appear to have flowed from WCF meetings.

“The fact that the WCF took place in Accra in 2019 and now we have something appearing as a draft bill is not surprising. This draft ‘family values’ bill seems to be one more iteration of the homophobic initiatives emanating from their conferences,” he says.

In their defense, Brown says the WCF had nothing to do with writing the Ghanaian bill: “In each of these countries people are saying ‘enough is enough’ with Western countries coming in and saying we are going to redefine the family.”

Brown insists that his organization provides inspiration, not instruction, he told CNN.

That inspiration seems apparent when Ghanaians pushing the bill use strikingly similar talking points to Brown’s organization, including a near obsession with the “natural” family as a way to propagate generational Christian conservative values.

Archbishop Philip Naameh, the president of the Ghana Catholic Bishops Conference, told CNN in a quote that “Those who are promoting gays and lesbians are not going to have children at all, and within a short time nobody should be surprised that Muslims will become a majority in this country and declare it an Islamic state.”

Naameh welcomed the WCF when they came to Ghana.

This is far from anomalous with regards to religious right groups in America. American evangelical groups in America have been found to be the ghostwriters of bills in other nations for years.

These two groups have not only sponsored and trained anti-LGBTQ candidates like Josh Hawley and Glenn Youngkin, but they have ghostwritten copious legislative bills targeting the LGBTQ community in the United States and across the world (in recent years the trans community especially).

The Alliance Defending Freedom, for example, sponsored a bill in Belize that would criminalize consensual sex between LGBTQ people up to 10 years in prison.

They also have sponsored likewise sponsored bills in Romania & Jamaica, looking to outlaw and criminalize LGBTQ life across the world.

The Billy Graham Evangelistic Association, the group behind the National Prayer Breakfast, has been implicated as one of the biggest funders of anti-LGBTQ groups in Europe. The European parliamentary report called the BGEA one of the top ten organizations responsible for “the lion’s share of US anti-gender activism in Europe.”

There are plenty of other American evangelical groups involved in this worldwide coordinated attack.

Family Watch International was in Hungary speaking to president Viktor Orban looking to help legislate against any form of LGBTQ mentions in the nation of Hungary.

The American Center for Law and Justice (ACLJ), founded by televangelist Pat Robertson, was found in 2012 to be behind Uganda’s “Death to Gays” bill, alongside the Alliance Defending Freedom and the International House of Prayer (led by Jesus Camp leader Lou Engle)

The key thing to remember is that whenever there is a bill like the LGBTQ death penalty in Ghana, usually behind the bill is a malevolent manticore of American evangelical groups either footing the bill or ghostwriting it.

Keep in mind these are the same groups that not only train Republicans in America, but also write their anti-LGBTQ culture war bills that do immense harm.