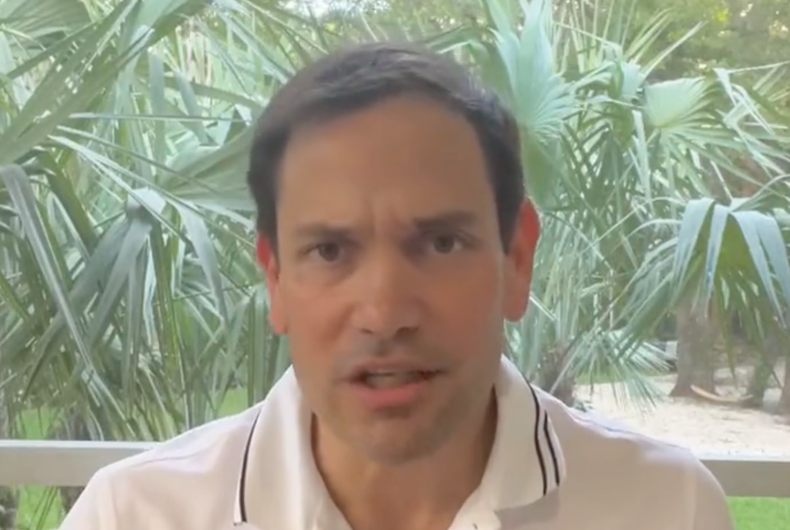 Yes, Donald Trump tried to overthrow the duly-elected government of the United States, but give him credit for one thing: calling Marco Rubio small.

Little Marco, the diminutive senator from Florida and failed presidential candidate, just got smaller when his response to the marriage equality question facing the United States Senate failed spectacularly, x 4.

First, Rubio, of all the senators asked by CNN’s Manu Raju whether they would support the Respect for Marriage Act, or RMA, was the only one to respond with… smallness, shouting through closing elevator doors that the vote was a “stupid waste of time.”

Second, those elevator doors closed on Rubio and Wisconsin senator Tammy Baldwin (D), who is gay. Trapped, Rubio had to endure the embarrassment of insulting one of his colleagues in front of the Washington press corps and hear from Baldwin about why he was wrong.

“You probably would have loved to be on the elevator to see the exchange after,” Baldwin told CNN.

Third, Rubio got ripped by RMA stakeholder Pete Buttegieg, the out Secretary of Transportation, on the Sunday morning talk circuit.

Tapper: Rubio called the bill a stupid waste of time
Buttigieg: If he has time to fight against Disney, I don’t know why he wouldn’t have time to safeguard marriages like mine pic.twitter.com/GdaFII7v5R

“If he’s got time to fight against Disney,” Buttigieg said, referring to Rubio’s support for Don’t Say Gay in Florida, then “I don’t know why he wouldn’t have time to help safeguard marriages like mine. Look, this is really, really important to a lot of people. It’s certainly important to me,” Buttigieg said on CNN’s State of the Union, letting the facts speak for themselves.

Last, Rubio couldn’t resist bullying the gay messenger with what one poster called an “emergency video” in response, full of inaccuracies and more small-mindedness.

Rubio mocked the cabinet secretary’s Harvard education, claimed he doesn’t know the difference between state and federal responsibilities, implied Buttigieg favors Chinese manufacturers over goods Made-in-America, bashes electric vehicles, and said Buttigieg and like-minded Democrats are in thrall to “a bunch of affluent, elite liberals and a bunch of Marxist misfits, who sadly, today control the agenda of the modern Democratic Party.”

These are the same people, Rubio claims, that are indoctrinating 6 and 7-year-olds with their transgender agenda.

Rubio, who faces popular Florida congresswoman Val Demmings (D) in his reelection bid this November, ran for president in 2016, placing third in the Republican Iowa Caucus after Ted Cruz and Donald Trump. On the Democratic side in 2020, Pete Buttigieg came in first.