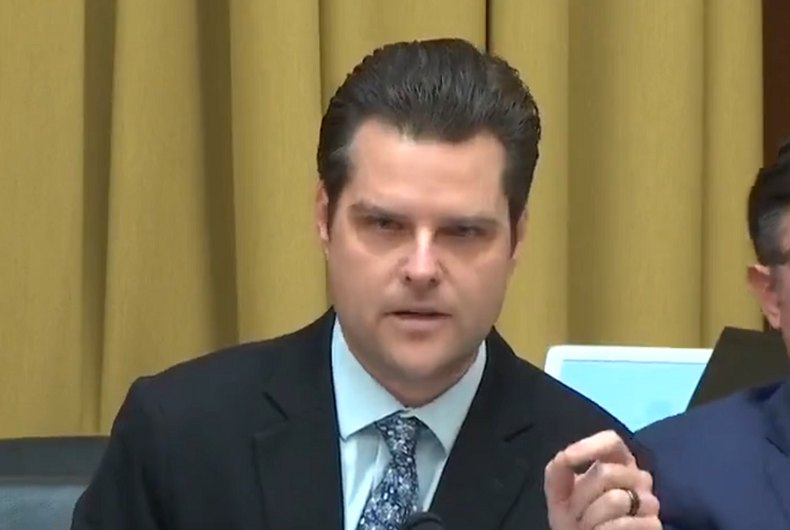 A queer, Latina teen named Olivia Julianna has brilliantly mocked far-right Rep. Matt Gaetz (R-FL), who is under federal investigation for allegedly sex trafficking a 17-year-old girl, after he tried to use sexism, body-shaming, and his personal Twitter account to insult Julianna and other pro-choice activists.

“Have you watched these pro-abortion, pro-murder rallies?” Gaetz asked the crowd. “The people are just disgusting. Why is it that the women with the least likelihood of getting pregnant are the ones most worried about having abortions? Nobody wants to impregnate you if you look like a thumb.”

“These people are odious from the inside out,” Gaetz continued. “They’re like 5′ 2″, 350 pounds, and they’re like, ‘Give me my abortions or I’ll get up and march and protest.’ And I’m thinking —march? You look like you got ankles weaker than the legal reasoning behind Roe v. Wade.”

In response to Gaetz’s words, on Sunday afternoon, Julianna wrote on Twitter, “It’s come to my attention that Matt Gaetz — alleged pedophile — has said that it’s always the ‘odious.. 5’2 350 pound” women that ‘nobody wants to impregnate’ who rally for abortion. I’m actually 5’11, 6’4 in heels. I wear them so the small men like you are reminded of your place.”

In response, Gaetz published an image of Julianna taken from her personal Twitter account in which she wears a t-shirt that reads, “Bans off our bodies.” Commenting on the image, Gaetz wrote, “Dander raised.”

Gee, I wonder why @mattgaetz didn’t include my original tweet in his attack against me… pic.twitter.com/373L2qu2CX

“Dander raised” was likely a reference to an article from the far-right media outlet Newsmax which said that Gaetz’s comments were “sure to raise the dander of his political opponents.” The slang phrase “dander raised” means to respond to something by losing one’s temper or taking some other action.

Immediately in response to Gaetz’s reposting her image, Julianna wrote, “My rule is if you’re going to attack me for my looks you better be hotter than me. And to be blunt Matt Gaetz is one of the ugliest things to crawl out of the pits of Florida.”

“You literally look like this,” she wrote in a second tweet, including an image of Butthead, a fictional animated character whose resemblance to Gaetz has been noted many times over.

She then added, “Am I not a little too old for you Matt? I know you have a thing for targeting teenagers but 19 is on the cusp don’t you think?”

Am I not a little too old for you Matt? I know you have a thing for targeting teenagers but 19 is on the cusp don’t you think? https://t.co/kmScakMjpz

Julianna told Newsweek, “A sitting congressman decided that body shaming a teenager was appropriate. That is despicable.” Numerous Twitter commenters agreed with her.

She also said that she had struggled with body issues throughout her life.

“He decided to blast my appearance to his millions of followers,” Julianna continued. “I am now in great standing and in good health maintaining my diabetes and other chronic illnesses that have contributed to my body image issues – but if I was not, this kind of attack could have been catastrophic to my mental health.”

“What’s even more despicable is that said congressman is allegedly sexually predatory to minors,” she added. “If I was Matt Gaetz I’d worry more about potential investigations into sexual misconduct and less about teenage activists.”

Gaetz recently voted against a bill that would legalize the federal recognition of same-sex marriage. He has also made transphobic comments and, in 2021, proudly announced his membership in a congressional caucus that pledged to uphold “uniquely Anglo-Saxon political traditions.” The phrase “Anglo-Saxon” is often used in political rhetoric as a dog whistle term for white supremacy.

On July 25, Julianna wrote in a tweet to Gaetz, “So far nearly 600K people have seen your failed attempt at dragging a teenager. Lol. You tried to start a social media brawl with a Gen-Z social media girly. How dumb.”