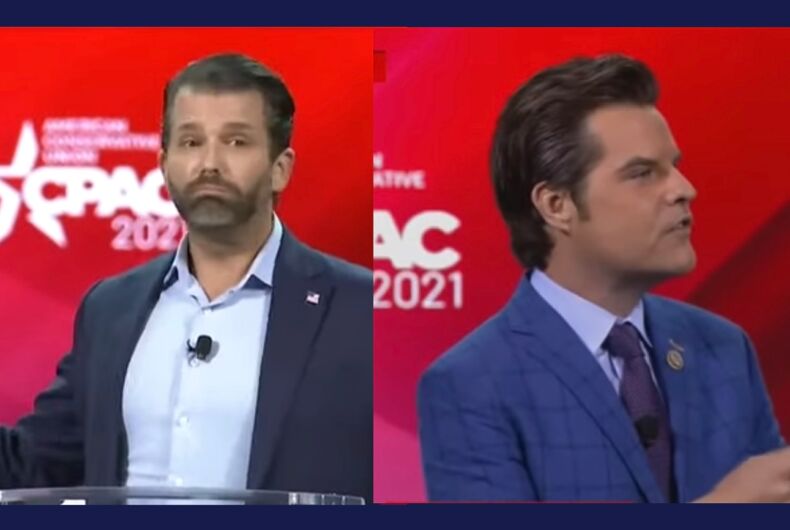 In between lies about the election and attacks on “the establishment” and Joe Biden, many of the speakers at the Conservative Political Action Conference (CPAC) this weekend are going to fill their airtime entertaining the crowd with terribly-veiled attempts to mock trans people.

That wasn’t his only joke though. “Orlando is awesome,” Cruz quipped to open, but “it’s not as nice as Cancun.”

In addition to being universally despised in a party that somehow embraces the likes of Laura Ingraham and former Rep. Steve King, Cruz also holds the distinction of being one of the most anti-LGBTQ senators in a chamber full of them.

He’s previously trashed trans rights on the grounds that “I don’t want my daughters taking showers with little boys.”

Gaetz, not one to miss out on capitalizing on something politically, attacked trans people in addition to railing against “cancel culture,” Rep. Liz Cheney and the Potato Head brand of toys.

“We gather here today in the shadow of Disney,” Gaetz said to the Orlando, Florida audience, “a corporation that recently cancelled its own founder, Walt Disney. Look out, Mr. Potato Head, you’re next.

Conservatives have been in uproar over toymaker Hasbro announcing that they are dropping the “Mr.” from the “Mr. Potato Head” brand name. The Mr. Potato Head and Mrs. Potato Head toys will still be available as they were, the name of the entire brand of toys will just no longer feature the masculine prefix.

The toy does not have genital “parts” that can be “moved around” because it is a toy potato, and the only thing that makes it male, or gendered at all, is the human perception of the featured parts.

Gaetz dropped the remarks right after claiming “American business should be worried about business, not wokeism.” He also claimed that the reception he received was the most “warm welcome since I was in Wyoming,” a dig at Rep. Liz Cheney (R-WY), who has openly gone against Trump since the riots and become the target of the pro-Trump wing.

Gaetz went on to defend Cruz, claiming that “it was awful the way the media treated” the Senator for his trip to Mexico while his state dealt with a historically disastrous snowstorm.

Donald Trump, Jr., meanwhile, either copied the synopsis of Gaetz’s remarks, or didn’t bother to change his key points after Gaetz spoke.

He also attempted to resort to his father’s favorite tactic, alliteration-filled nicknames. He called Cheney “Lincoln Project Liz,” and tried to attack her by bringing up her father’s past shooting of a bystander during a quail-hunting trip.

“We’ve seen that, we know that to be a fact,” he mentioned ironically, “but people think they can get away with it by just talking about diversity blindly… Sort of a problem, isn’t it?”

“This month alone, they’ve banned the Muppets and made a gender-neutral Mr. Potato Head,” he claimed. Neither claims are true, but that was no matter for Trump Jr.

Reading from prepared remarks, Trump Jr. continued, “If Hasbro really wanted a gender-neutral Mr. Potato Head so badly, they should just slap a picture of CNN’s Brian Sitt-ler [sic] on the cover of their next potato,” trying to compare CNN media correspondent Brian Stelter to Mr. Potato Head because unnamed people “don’t call him Mr. Potato Head for nothing!”

“These are the issues of our times, folks,” he warned.