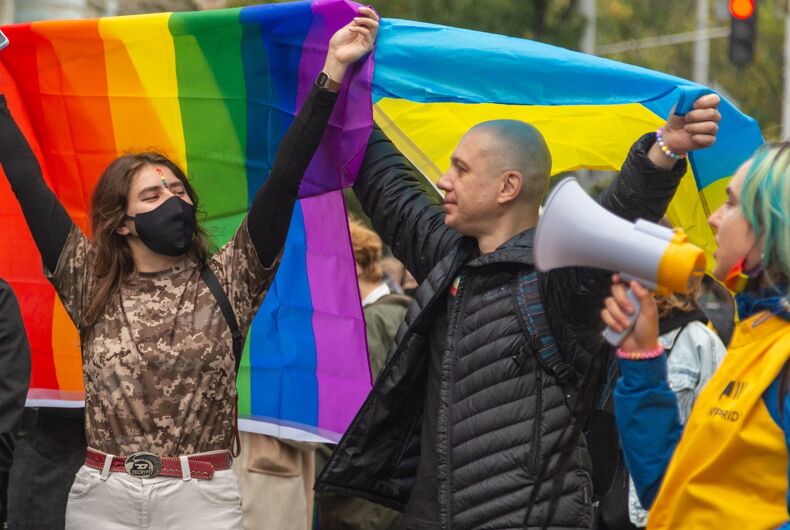 Pride month is over for another year, but during the last weekend of June celebrations across Europe took place that allowed the continent to end 2022’s festivities in a grand fashion.

On June 25, a tribute parade to LGBTQ diversity was on dual display in Poland, as hundreds of Ukrainians traveled to the Polish capital, to hold a Kyiv Pride event in conjunction with Warsaw Pride’s yearly extravaganza.

With an ongoing war precluding the Kyiv organization’s event from being held in Ukraine, a decision was made in the spring by the Kyiv Pride board, and the group’s director Lenny Emson, to take the event across the border.

This decision led to both significant media attention and attendance which some counted as being as high as 80,000 taking to the Warsaw streets. In comparison, Emson told LGBTQ Nation, that 10 years ago, the first Kyiv Pride march had around 100 attendees, with the 2021 event topping out at a then-record number of 7,000.

In the months before arranging for the side-by-side Pride parade, Emson also made this plea to LGBTQ organizations across the world, “I’m asking every Pride organization, every LGBTQ organization across the United States, and the world, please reach out to us. Please, please carry our flag, please carry our banners, please keep us in your minds and hearts during your parades. We need money, we need any help, but we need more than anything to not be forgotten during the long road ahead. The war isn’t over, it’s not ending, and in June a show of unity is needed.”

Those words were taken to heart by attendees across the globe, including NYC Pride:

We are your daily reminder: war is not over, we still need your help: weapons, sanction, donations 🇺🇦@NYCPride pic.twitter.com/TnGYk6iJAh

At a pre-march press conference on June 25, Emson brought up Russia’s recent terrorist activities against Ukraine and stated unequivocally that both Kyiv Pride and Warsaw Pride stood in solidarity together against the Russian aggression and war.

Kyiv Pride board member Maksym Eristavi, who attended the event in person, expounded on the hell Russia was inflicting on his nation in a tweet on the day of the march as well.

“We will march to remind you about Mairupol, and Sievierodonetsk, and Lysychansk, and Bucha. We will march for Ukrainians who are slaughtered, kidnapped, and raped for attempts to march in Kherson Enerhodar, and Melitopol.”

This statement of defiant strength by Eristavi stood in stark contrast to the suffering and silence that many of the LGBTQ community face in Russia.

In 2012, Russian courts upheld the Moscow City Council’s 100-year ban on Pride events in Russia’s capital city. This was followed by ever more draconian laws enacted nationwide by the Putin administration to stem and silence queer voices throughout the country.

She-Ra & the Princesses of Power creator comes out as transgender. His name is Nate