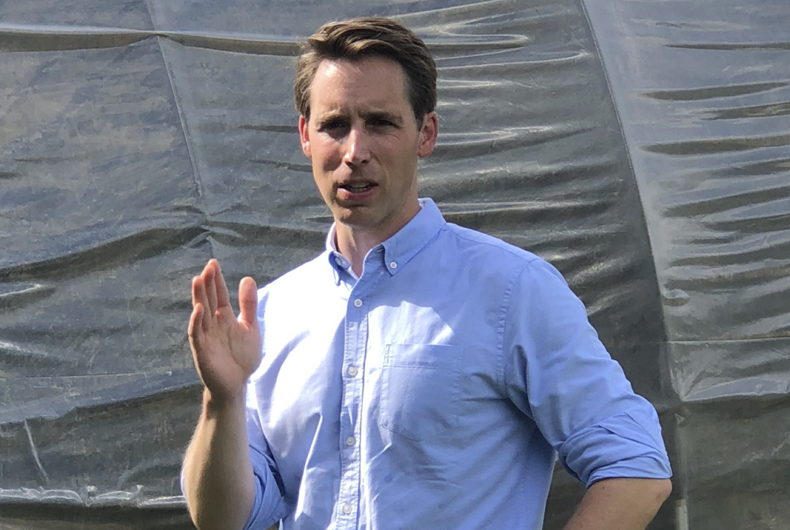 Last week, Sen. Josh Hawley (R-MO) was the laughingstock of D.C. as the January 6 committee released footage of him running out of the Capitol as insurrectionists stormed the building despite raising his fist in support of the pro-Trump mob hours earlier.

Yesterday, the Kansas City Star reminded everyone about Hawley’s upcoming book on masculinity entitled Manhood: The Masculine Virtues Americans Need, which argues that the left is “waging a war on masculinity.” Hawley, who is believed to have 2024 presidential aspirations, is trying to make defending masculinity from the left central to his political persona.

The newspaper said that Hawley “will be speaking at the Stronger Men’s Conference — which features things like monster trucks — a few weeks before the book goes on sale.” It’s currently available on preorder for $29.99.

All of this reeked of a deep insecurity to many people online, leading to jokes.

Imagine someone walking up to a Barnes & Noble clerk, saying "I can't find Josh Hawley's manhood"

Imagine, if you will, the level of misplaced self-confidence it takes for Josh Hawley to think that calling his book "Manhood" will go well for him

I’ll bet Josh Hawley’s ‘manhood’ is a white sheet and has holes cut-out for his eyes. @HawleyMO

What Josh Hawley knows about manhood could be written on a post-it note.

They should send a copy to Trump so he can officially own Josh Hawley's Manhood. https://t.co/sAHHQ167Bc

Josh Hawley’s book titled ‘Manhood’, an autobiography about his struggle to find his manhood after it fell out of his pants while running from the violent mob he’d help incite. A must read!

I know everyone is joking around about Josh Hawley’s new book and that lunatic at the Claremont Institute and his comments about Trump and manhood.

But seriously, you need to read ⁦@jasonintrator⁩’s book How Fascism Works because, believe me, it lays it all out, folks. pic.twitter.com/tCYwWBhFYh