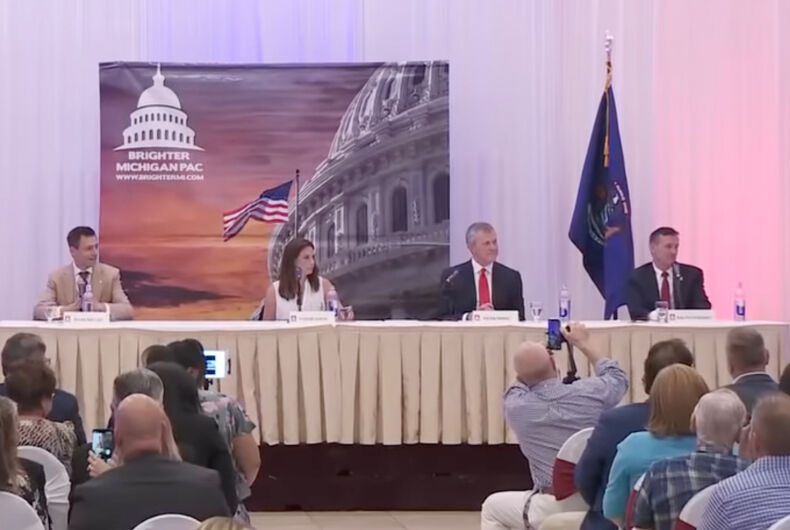 Michigan’s five remaining Republican gubernatorial candidates focused on LGBTQ issues—as well as other social and culture issue, with little discussion of economics—in their most recent debate, with several indicating that ending the constitutional right to same-sex marriage is a priority.

Soldano, Kelley, and Rebandt all expressed some level of opposition to the constitutional right to same-sex marriage established in the Supreme Court’s 2015 decision in Obergefell v. Hodges.

Soldano, who is Catholic, said he supports same-sex “unions” but believes that “marriage” should be an exclusively heterosexual institution.

Echoing Supreme Court Justice Clarence Thomas’s concurring opinion in the court’s recent decision overturning Roe v. Wade, Kelley called for the Court to reconsider its decision in Obergefell as well: “They need to revisit it all,” he said, and “give the power back to the states.”

Kelley was arrested in June and is currently facing charges related to his participation in the January 6 insurrection at the U.S. Capitol in 2021.

Rebandt, meanwhile, voiced his support a 2004 amendment to Michigan’s state constitution banning all same sex-marriages and civil unions. “The Michigan Constitution says that for the betterment of society, marriage is between a man and a woman,” Rebandt said. “I draw the line where God does.”

Neither Dixon nor Rinke addressed the question of same-sex marriage. Dixon did promise to bar drag queens from schools along with critical race theory, a reference to out Michigan Attorney General Dana Nessel’s recent joke endorsing drag queens in every school in the state.

The winner of Michigan’s August 2 Republican gubernatorial primary will go on to face incumbent Gov. Gretchen Whitmer (D) in November.

Landlord ordered trans tenant to “act as a man.” The Biden administration took him to court.