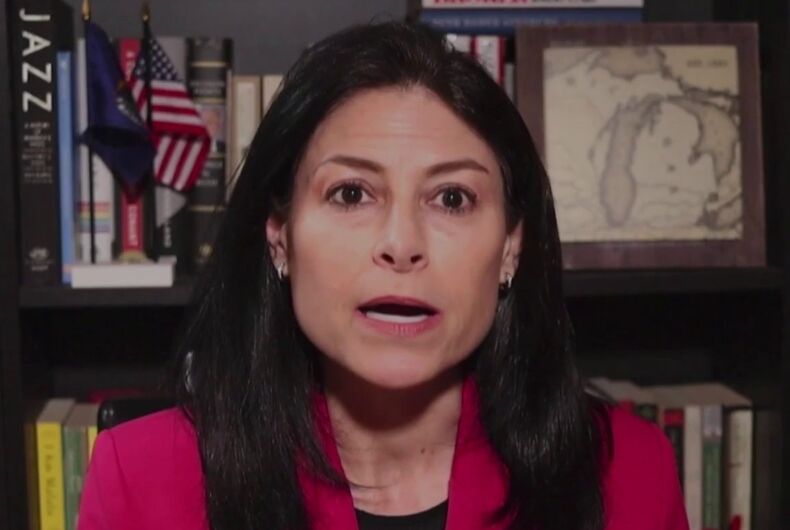 Michigan Attorney General Dana Nessel recently blasted the numerous Republicans who have sought to criminalize child attendance at drag queen performances, calling it a “not a problem” and a needlessly divisive wedge issue.

“I am so tired of having prominent members of our state government create wedge issues that don’t help, that don’t heal us but divide us. And that’s all they do,” Nessel said while speaking at a civil rights conference in Lansing on Wednesday.

Related: This 12-year-old bought his family a house with money he earned from drag

Nessel said that state leaders who want to improve health care, education, and housing in the state shouldn’t target minority groups, commenting, “[You] know what is not a problem for kids who are seeking a good education? Drag queens.”

“Drag queens are entertainment,” she added, according to The Detroit News. “And you know what I’ll say that was totally not poll-tested, I’d say this, ‘A drag queen for every school.'”

At other points, she called drag queens “fun,” stating that they can help cheer up children with “emotional issues” and “make everything better.”

Nessel’s comments were likely a reaction to Republican efforts to criminalize the presence of children at drag shows. Tudor Dixon, a Republican candidate for Michigan governor, said he would support a bill handing down “severe criminal penalties for adults who involve children in drag shows.”

In response to Nessel’s comments,  the former president’s son, Donald Trump Jr. wrote on Twitter, “’A Drag Queen for every school’ is a great summation of today’s Democrat Party Platform.”

“A Drag Queen for every school” is a great summation of today’s Democrat Party Platform. https://t.co/F8SUcdUWn0

The Michigan State Republican Party Chief of Staff, Paul Codres, wrote in response to Nessel’s comment, “This is unbelievable. This is not normal. She shouldn’t be allowed to joke this away.”

This is unbelievable. This is not normal. She shouldn’t be allowed to joke this away. Dana Nessel is unfit for any office, especially Attorney General. Matt DePerno will bring an end to this chaos. https://t.co/bk6B79nNER

A few days later, Florida Gov. Ron DeSantis (R) implied he is open to using Florida’s child protective service laws to terminate the parental rights of adults who take their kids to see drag shows. “When will the sexualization of children stop?” he asked in a tweet. His press secretary, Christina Pushaw, has said that any person who supports acknowledging the existence of LGBTQ people in schools supports pedophilic child rape.

Right-wingers have increasingly targeted child-centered drag events such as Drag Queen Story Hour, accusing the educational and LGBTQ-inclusive family-friendly events of “grooming” children for sexual assault and exposing them to inappropriate sexual content. Most such events just feature lip-sync performances, sing-alongs, dance-alongs, and storytelling by drag performers in colorful costumes and makeup. The performers teach kids about self-acceptance and caring for others who may look or love differently than they do.