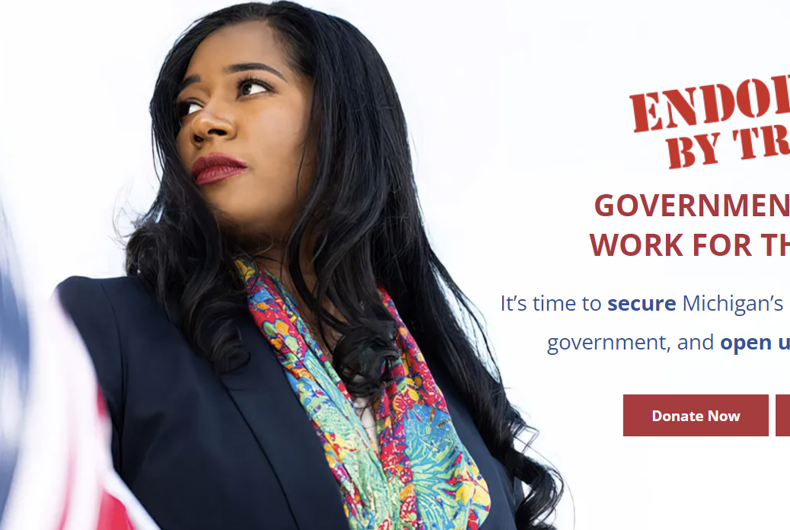 Kristina Karamo is running for Michigan Secretary of State and she has the stamp of approval from Donald Trump himself. The state Republican Party endorsed Karamo, a community college teacher and former podcaster, over the weekend.

She fits right in with a party overtaken by conspiracy theorists and QAnon worshippers. Karamo believes that pop singers Beyonce, Cardi B, Billie Eilish, and Ariana Grande are tools of Satan – and don’t get her started on yoga.

Karamo, 36, first got involved in politics as a poll challenger in the 2020 elections. She claims she saw at least two ballots get miscounted while she observed absentee ballots getting processed, which got her an appearance on Fox News to help spread conspiracy theories about the election.

Before getting involved in the election, Karamo spent years writing online and making a fringe podcast where she discussed how “the devil” is influencing American politics and education.

Their party has totally been taken over by a satanic agenda,” she said of Democrats on her podcast in 2020.

Beyonce is “trying to target Black people into embracing paganism. And one of the really interesting things is that her husband, Jay-Z, is, many people have said, is a satanist. I believe it to be true. I don’t have any hard proof,” Karamo claimed in one episode. “So Beyoncé is working overtime to pull more and more Black Americans into paganism and calling it African spirituality. It’s hilarious. Actually, it’s not hilarious. It’s sad. It’s really sad.”

In a piece bemoaning Ariana Grande’s song “God Is A Woman,” which Karamo declared “blasphemy of the highest level,” she accused pop singers of leading children astray.

“And these are the people who entertain your kids,” she said. “And then we still have, ‘Why are young people walking away from the faith?’ Because they’re under a satanic delusion. You think – or, or Billie Eilish. She has a song called ‘Good Girls Go to Hell.’ That’s the name of a song. This is what kids are listening to.”

“Whether she knows it or not — I have no clue — she is a tool of Lucifer. Cardi B is another tool of Lucifer because she peddles filth in the culture, and she peddles such filth and sexual degeneracy in our culture that many people are laughing at her,” Karamo bemoaned in another episode.

In another podcast episode from this year, she called schools “government indoctrination camps” that teach “unbridled wickedness” to children.

“There is no such thing as a person with two mommies and two daddies,” she said in January. “That is just factually incorrect.”

“No, it’s the parent and their homosexual lover. That’s what’s going on,” she said last August.

In 2019, she wrote in a blog post that trans women are “mentally ill adults playing dress up. That is also part of the horrifically destructive sexual revolution.”

Karamo isn’t just opposed to LGBTQ people existing. She also believes that straight people who have premarital sex – which is pretty much all of them – are going down a path towards pedophilia.

But yoga is reserved for special fervor unseen outside of Alabama. She thinks it is a “satanic ritual” meant to “summon a demon.”

“The word yoga really means yoke to Brahman. So people are thinking they’re doing exercises, no, you’re doing actual, a satanic ritual and don’t even know it. And that’s becomes from our very materialistic worldview that’s crept into every corner of our life that someone could be practicing an open, demonic ritual in front of our faces and we’ll be like, ‘Oh wow, this must be just some kind of cultural dance.’ Like, it’s not a cultural dance, it’s a demonic ceremony. What’s wrong with you? But people don’t understand that. It’s because our worldview is so skewed.”

Gay Republicans supported anti-LGBTQ legislation. Now they’re surprised some of it is bad.

ExxonMobil is trying to reassure LGBTQ employees after it banned rainbow flags. It isn’t working.