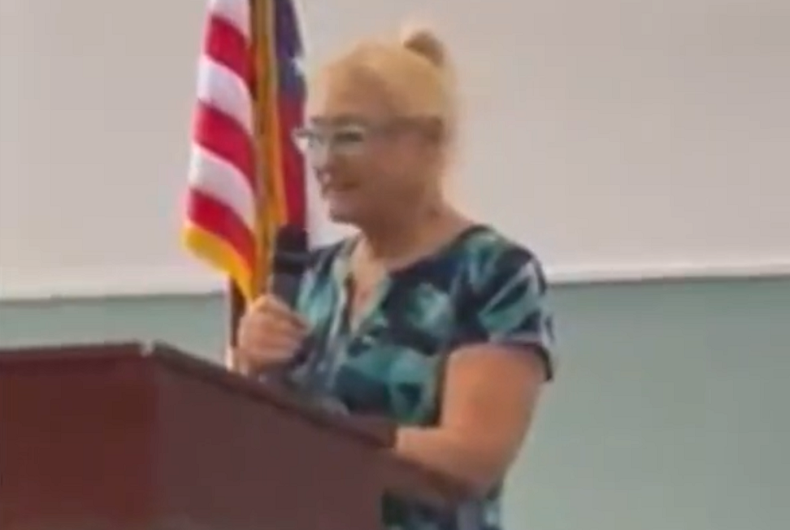 A Florida school board candidate argued in a public meeting that doctors who provide care for transgender children “should be hanging from the nearest tree.”

Alisabeth Janai Lancaster, who is running for a spot on the Santa Rosa County School Board, made the violent comments this past Monday at a political forum organizes by the far-right organization Gulf Coast Patriots at the St. Sylvester Catholic Church in Navarre, Florida.

“The children should not be burdened with the woke agenda that is leaving a path of destruction everywhere it goes,” she said.

“Just to mention what has recently surfaced, the pharmaceutical companies are paying $1.3 million for each gender reassignment,” Lancaster continued. It’s unclear what she’s referring to or where she got her number.

“These doctors that are going along with mutilating these children and prescribing hormone blockers to these kids, in my opinion, they should be hanging from the nearest tree,” Lancaster told the crowd, getting loud applause.

There's so much to dissect in this video from Pensacola, Florida where school board candidate, Alisabeth Janai Lancaster, said doctors who treat trans kids should be "hanging from the nearest tree." The crowd applauded her. pic.twitter.com/SjfubPl48W

Lancaster is not commenting on her own statements either.

State Rep. Alex Andrade (R) was at the meeting, and he later said that he supports the same agenda as Lancaster and claimed that Lancaster was just joking, even though no one was laughing in the video.

“It’s wrong to joke about lynching political opponents,” he said. “We should never call for the murder of the Americans that disagree with us; it’s un-American.”

“I feel like she just said the quiet part of what conservatives believe,” said Devin Cole of Socialist Trans Initiative, a local organization for transgender people.

“It’s a disgusting and deployable comment and a reminder that we absolutely have to unite and fight these horrible reactionary people who want to kill us,” Cole continued. “She pretty much said it. They want to kill us, and we have to do everything in our power to overthrow them, because now it’s boiling down to a matter of life and death for us as transgender people.”

Earlier this year, the state passed the “Don’t Say Gay” law, which bans teachers from talking about sexual orientation and gender identity in younger grades and restricts those topics in older grades, a law that has already caused schools to roll back programs to fight anti-LGBTQ bullying.

School boards in the state have found themselves in the center of the battle over LGBTQ rights as organizations like Moms 4 Liberty organize conservatives to get LGBTQ books banned from school libraries. A man is currently suing the Sarasota County, Florida school board, arguing that books about LGBTQ people are “explicitly sexual materials.” He admitted to local news that he hasn’t actually read the books he wants banned and he just found a list of books online.

Lancaster said that she was a Federal Reserve law enforcement officer for 28 years but did not mention any experience in education.