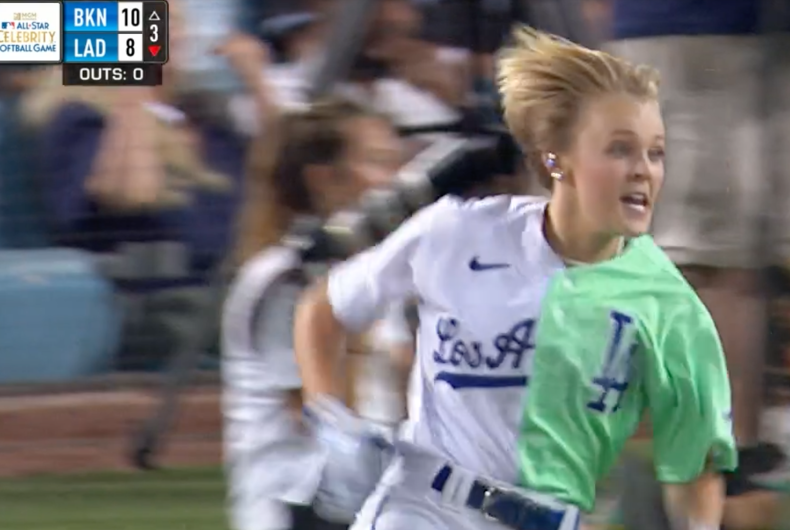 Saturday night at Major League Baseball’s Celebrity All-Star Game in LA, out teen dance phenom Jojo Siwa ripped one into left field past the Mikos rapper/pitcher and boogied around the bases for an inside home run.

She landed flat on her back at home plate.

Despite the four-bagger, Siwa’s LA lost the offense-heavy match-up against Brooklyn, 15-13.

Siwa came out in 2021 when she revealed she was in a relationship with her best friend and fellow dancer/influencer Kylie Prew. After a YouTube break-up and rekindling, Siwa says the online couple are content.

“It’s good to have people that have your best interest around you, and she really does have mine,” Siwa told People magazine.

Last year, Siwa competed on Dancing With the Stars with ballroom dancer Jenna Johnson as part of the show’s first same-sex dance team. They placed 2nd.

When she’s not grand-slamming at Chavez Ravine, Siwa is busy as a new judge on So You Think You Can Dance, as co-manager with her dance mom Jessalynn Siwa of the girl group XOMG POP!, and shooting her new follow-doc Facebook series JoJo Goes.

Siwa got her start as a nine-year-old and the youngest contestant on Abby’s Ultimate Dance Competition on the Lifetime network, before joining the Dance Moms franchise.

In 2016 she released the bully beatdown single “Boomerang” on her YouTube channel It’s Jojo Siwa, earning nearly a billion views through 2022.

She was included on Time magazine’s annual list of the 100 most influential people in the world in 2020.