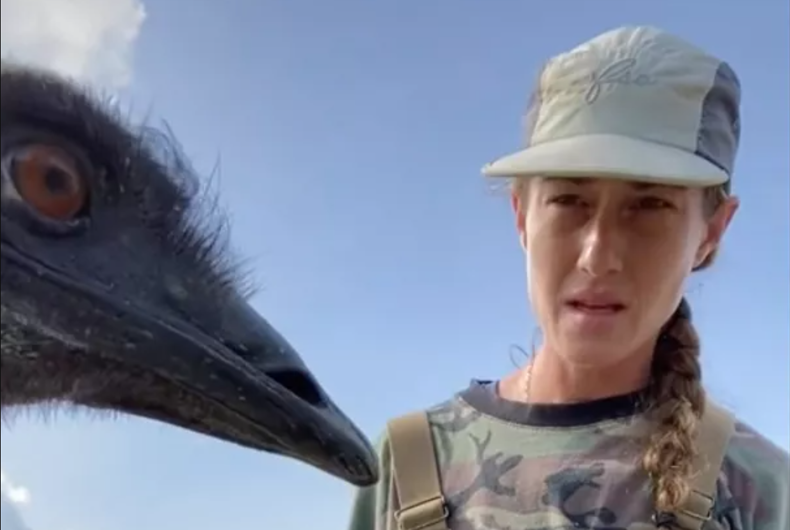 A lesbian farmer in South Florida and her emu pal have become a social media sensation. Taylor Blake, a 29-year-old hobby farmer, has been creating content about the animals on her Knuckle Bump Farms accounts since 2013, but it wasn’t until the nearly six-foot-tall bird named Emmanuel started stealing focus that the internet really took notice.

The emu first appeared on camera in a TikTok video in early July. In the clip, which has received over nine million views and 1.8 million likes, Blake is attempting to showcase one of the farm’s cows when Emmanuel wanders into the frame, apparently fascinated by the camera.

“Emmanuel, don’t do it!” Blake shouts, trying to prevent the bird from pecking the camera. The admonishment has since become something of a catchphrase, spawning a hashtag and calls to create a T-shirt bearing the slogan.

Emmanuel has since become a star on Knuckle Bump Farms’ TikTok, with fans clambering for more content featuring the ornery bird.

“Emmanuel is actually very affectionate,” Blake writes in the description of one post. “He either wants to be cuddled or wreak havoc, no in between.”

Reply to @mikemcgarry88 Emmanuel is actually very affectionate. He either wants to be cuddled or wreak havoc, no in between. #emu #emusoftiktok #farmlife

Actress Elizabeth Banks even recently recreated the original Emmanuel video on her own TikTok.

Why is he like this? (An homage)@knucklebumpfarms Thank you for the joy

In a recent interview with the Washington Post, Blake said she and her girlfriend moved to Knuckle Bump Farms to help out her grandparents, who own the farm. She hadn’t initially intended to post the original video of Emmanuel interrupting her, but changed her mind a month later when she re-watched it on her phone. She’s glad Emmanuel is giving fans a break from the seemingly perpetual bad news cycle.

“The world is dark, and animals bring everyone joy. They’re funny, they’re entertaining.”

She also promises that Emmanuel merchandise is coming soon, which will benefit the farm.

According to Blake, Emmanuel is taking his newfound fame in stride. “I have talked to him about it a few times, but he hasn’t really had much of a reaction. I think he’s just … adapting to this new life of fame.”

Emmanuel has let the fame get to his head pic.twitter.com/VNmF4E4Ju0