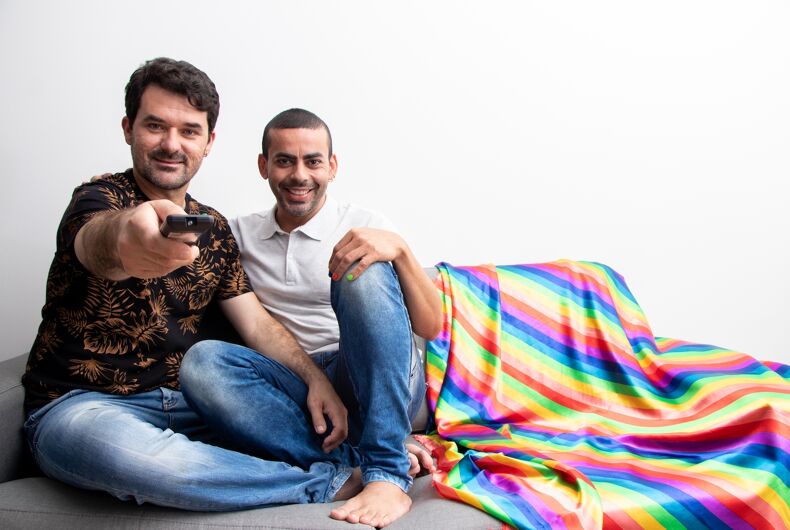 We’re a little more than halfway through 2022 and already it’s been a stellar year for TV. Pachinko! We Own This City! The Bear! Too many addictive true crime limited series to even mention! And among the many stellar small screen options that have premiered this year, there have been plenty of LGBTQ-centered shows to choose from.

In no particular order, these are the stand-out queer shows of 2022 so far.

If you had told me ahead of its premiere that this pirate comedy from executive producer Taika Waititi would sneakily become one of the queerest shows of the year, I probably wouldn’t have believed you. But creator David Jenkins packed his cast of misfit buccaneers with out and nonbinary actors (Nathan Foad, Game of Thrones alum Kristian Nairn, Vico Ortiz) playing queer characters. The queer relationships on the HBO Max show, including the central one between bumbling Captain Stede Bonnet (Rhys Darby) and the ruthless Blackbeard (Waititi), are surprisingly touching. Also, Our Flag is just delightfully funny!

This is Going to Hurt

Tucked away in the hinterlands of AMC+, this British medical dramedy may have escaped your notice. If so, you would do well to correct that oversight ASAP. Out actor Ben Whishaw (the once-and-future voice of Paddington) truly shines as an overworked doctor of obstetrics and gynecology navigating both the grinding bureaucracy of an NHS hospital while trying to hold together his shambolic personal life.

This sweet teen romance became a mini-phenomenon when it premiered on Netflix this spring, and rightly so. The series, based on Alice Oseman’s graphic novel, centers on the relationship between British schoolboys Charlie (Joe Locke) and Nick (Kit Connor) with warmth and unapologetic inclusivity. It’s a welcome addition to the LGBTQ TV canon, particularly for anyone desperate for the kind of coming-of-age stories straight audiences have always had.

HBO Max’s acclaimed, Emmy-nominated comedy gets so much deserved attention for being one of the funniest, most entertaining shows on the streaming landscape that it’s easy to overlook the fact that it also has one TV’s most lovable queer grumps at its center. Hannah Einbinder’s Ava is a difficult mess, with withering wit. She’s also the kind of character with whom you want to spend all the time in the world! And not for nothing, but Einbinder is more than a match for her formidable co-star, the iconic Jean Smart. Some of the show’s best moments are when Ava’s very 2022 queer intersectional sensibilities bump up against her mentor’s old-school zero-tolerance for BS. Also: Meg Statler. That’s all.

I hesitate to call HBO Max’s eight-part adaptation of the influential documentary series of the same name a queer show. But it does center on the bi-sexual Michael Peterson (Colin Firth), a North Carolina author accused of killing his wife (Toni Collette), and it certainly doesn’t shy away from the role his secret affairs with men played in the couple’s tumultuous marriage and how they were used against him by the prosecution. This version of The Staircase also digs into the way Peterson’s sexuality impacted his relationship with his queer daughter (Odessa Young). Beyond that, it features outstanding performances from the entire cast, particularly Collette and Firth (not to mention queer fave Parker Posey camping it up as prosecutor Freda Black), while cannily deconstructing the whole true crime genre.

Admittedly, Peacock’s Queer as Folk reboot is…uneven. But what the soapy queer drama lacks in subtlety and narrative coherence, it more than makes up for in heart and inclusivity. It may not be one of the best shows of the year, but it’s unquestionably one of the most refreshingly queer, and sometimes that’s enough! On the other end of the spectrum are Barry and Severance, two fiercely good shows that don’t exactly focus on queer issues, but feature memorably lovely gay romances.

And I can’t miss including two shows that ended their outstanding runs in 2022. Pamela Adlon’s wooly slice-of-life comedy Better Things was always packed with young queer characters pushing the show’s central character Sam (Adlon) out of her Gen X comfort zone. And Search Party ended a five-season run of bonkers comedy that could only have come from a queer mind.