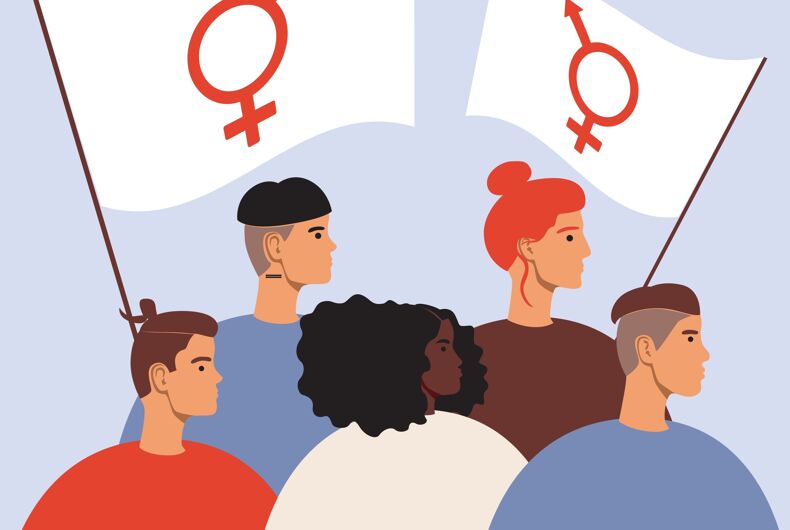 What does bigender mean? This is a question that a lot of people have been asking lately, as the term seems to be popping up more and more.

In case you’re not familiar with it, bigender is an identity term used by people who feel they inhabit both genders simultaneously or in alternation. To put it simply, bigender folks feel like they have two gender identities, which might both be expressed at different times or in different contexts.

Keep reading for a guide to the meaning of the term “bigender”.

Bigender Meaning And Place In The LGBTQ Spectrum

According to the Merriam-Webster dictionary, a bigender person is someone “whose gender identity is a combination of male and female or is sometimes male and sometimes female”. However, some experts argue that this “bigender” definition is somewhat lacking.

Sex educator Goody Howard explained to Cosmopolitan that “bigender” describes a person who identifies as having two genders. Bigender people can identify as one gender or another at separate times or identify as both at the same time. For example, a bigender person could identify as a man and a woman, feminine and genderqueer, agender and transmasculine, etc.

Bigender is a gender identity that falls under the non-binary umbrella. The term “non-binary”, according to the Human Rights Campaign, describes “a person who does not identify exclusively as a man or a woman”.

Non-binary people do not subscribe to the idea that gender is confined to the two identities of male or female. Instead, for non-binary people, gender is more of a spectrum in which you can identify with one gender, two genders, or a variety of genders, as well as fluctuate somewhere in between the spectrum or even identify outside of it altogether. The gender identities that fall under this spectrum include agender, genderfluid, genderqueer, and the like.

Zooming out even further, you’ll find that many (though not all) of those who identify as non-binary also consider themselves as part of the trans umbrella. This is because “transgender” is defined as someone whose gender identity and/or expression doesn’t match the cultural expectations that come with their sex assigned at birth – something that a lot of non-binary people also identify with.

What Pronouns Do Bigender People Use?

While a lot of non-binary people use they/them/theirs pronouns, it’s important to note that there is no “correct” set of pronouns for those who fall under the non-binary and trans umbrella.

Bigender people may feel comfortable using both binary pronouns (he/him/his and she/her/hers), a combination of binary pronouns and they/them/theirs pronouns, or even neopronouns – a new and ever-evolving category of pronouns that goes beyond what is commonly used. Some examples of neopronouns include ze/zir/zirs, xe/xem/xyrs, and fae/faer/faers.

The bottom line: don’t assume a person’s pronouns based on their gender identity or gender expression. The best practice when meeting someone new would be to introduce your name and pronouns, then ask for theirs.

How Is Bigender Different From Other Identities And Orientations?

Learning all these new terms can feel overwhelming, and it’s easy to confuse one for another. Here’s a quick guide to differentiating some of the similar-sounding terms out there:

Gender identity and sexual orientation are two mutually exclusive aspects of one’s identity. Gender identity refers to the innermost concept of your maleness, femaleness, or lack thereof. In other words, it’s how you perceive your gender. Examples of gender identity include cisgender, transgender, non-binary, bigender, agender, etc.

Sexual orientation refers to who you’re attracted to sexually. Examples of sexual orientation include gay, lesbian, bisexual, pansexual, etc. As such, you can be both bigender and bisexual at the same time, but it doesn’t necessarily mean that when you’re bigender, you’re bisexual and vice versa.

How Do You Know You’re Bigender?

Are you unsure if you fit into the bigender category? While there’s no single way to know if you’re bigender, there are certain signs that can point to this identity.

You May Not Always Feel Comfortable In Your Own Skin

Gender dysphoria is described as a feeling of distress or discomfort concerning your sex assigned at birth. For bigender people who don’t feel like they can express both their gender identities or people who are always assumed to be only one gender and not the other, gender dysphoria can be a very real problem.

Of course, it should be noted that not all bigender people experience gender dysphoria.

Your Gender Expression May Vary From Time To Time

Do you feel like the way you express yourself is a little all over the place? Like, one day, you’d rather dress more femininely, the next more masculine, and then next a mix of both? While this isn’t a surefire sign you might be bigender, it’s a common experience among those who identify as such.

Right now, “bigender” isn’t quite as well known or commonly understood as other gender identities out there. But that doesn’t make it any less valid than the others!