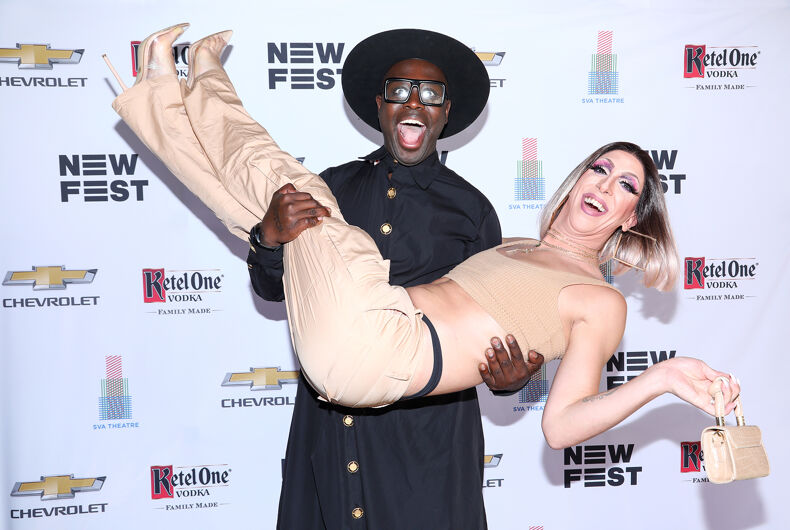 Bob the Drag Queen, left, and Marti Cummings at the NewFest Pride screening of Authentic Voices of Pride, Presented by Chevrolet, June 4, 2022. Photo by Jeff Eason for LGBTQ Nation.

Celebrities and activists, including Bob the Drag Queen and Marti Cummings, were on hand for a special screening, world premiere, and panel discussion of LGBTQ Nation’s documentary series Authentic Voices of Pride, Presented by Chevrolet.

Presented at New York City’s SVA Theatre as part of NewFest Pride, the special event showcased four documentary shorts, each of which tackles some of the community’s most important issues through original interviews and footage of entertainers, activists, policymakers, thought leaders, and everyday people.

“It is an essential time for LGBTQ+ voices to make themselves heard,” said NewFest Executive Director David Hatkoff and Director of Programming Nick McCarthy. “The stories that are part of this year’s NewFest Pride line-up are rebellious, hopeful, romantic, and daring and will remind us this Pride month that our visibility and community spaces are always worth fighting for as we celebrate who we love and who we are.”

“At this very moment, there is a historic number of anti-LGBTQ bills across the country. It is a crucial time for us to be at the helm of our own stories and shape the narratives about our lives,” said LGBTQ Nation’s Alex Berg, who served as producer-director for several of the documentaries and moderated the panel discussion. “No one tells our stories like we tell our stories.”

Over the past year, Authentic Voices of Pride, Presented by Chevrolet, has documented some of the most critical issues facing the LGBTQ community. The collaborative effort focuses on stories of hope and the people creating solutions through action and advocacy. The breadth of content, ranging from documentaries and deeply researched editorial coverage to some of the most impactful voices from social influencers, has also helped fund organizations working on these issues. To date, more than $230,000 has been raised for charities, including funds contributed by Chevrolet and donations from those viewing the Authentic Voices of Pride site.

Stevenson said she shared the documentary in which she, her wife Cheralyn, and two sons appeared, and change started to happen. “We live in a really small town. No one looks like us at all,” said Stevenson. “The town recognized our family — the first Black queer family — for Black History Month. And I think this video had a lot to do with it.”

On a personal level, Stevenson also built a bridge after sharing the film with family members. “My Christian conservative father-in-law sent me a text message saying that if all can’t have family equality, he’s not on board,” she said. “He’s going to fight for equality for all families.”

Despite the challenges facing queer communities in the U.S. and worldwide, the panelists expressed reasons for hope.

Cole spoke of his experience at Detroit’s Ruth Ellis Center as both a client and employee. The Center offers comprehensive services for queer youth and young adults with a focus on people of color, including primary and behavioral health care, drop-in care, and the soon-to-open Clairmount Center, a permanent supportive housing program.

“From being someone receiving services at Ruth Ellis Center to becoming the program manager, I had to have a lot of optimism,” said Cole. “I’ve been through a lot. But when you’re at your lowest point, the only way you can look is up. What gives me hope is when a young person feels like they can talk to me and engage, that means so much.”

“Let youth lead the way,” said Berlin. “Be yourself. I truly did grow into the person that I love.” More documentaries from Authentic Voices of Pride, Presented by Chevrolet will release throughout the year, including profiles of small-town life and the Stonewall generation.

What does bigender mean?