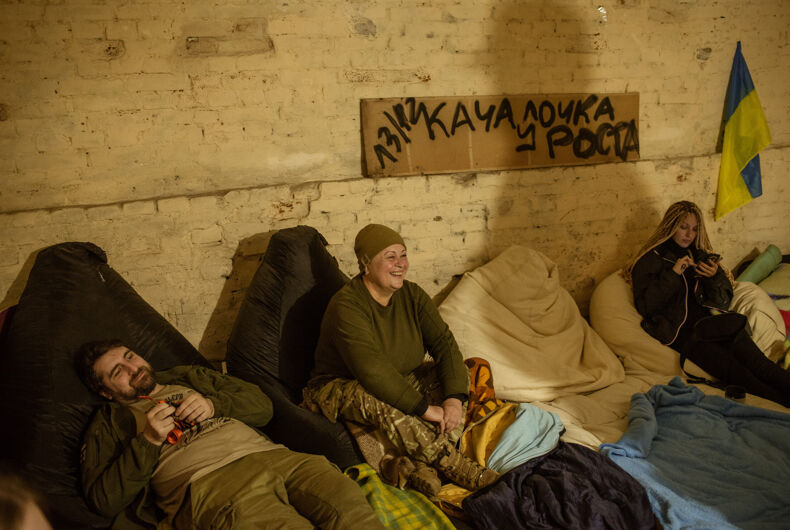 ZAPORIZHZHIA, UKRAINE - MARCH 31 : Viacheslav Khudiakov, 33, a member of the paramedics providing medical care to frontline soldiers, the Hospitallers, with Tanya, a nurse and Sandra are seen at the center of Azov Battalion in Zaporizhzhia, Ukraine on March 31, 2022. This center works as a base for those who belong to the battalion as a logistic point for receiving food and medicine to be later distributed.Photo: Photo by Andre Luis Alves/Anadolu Agency via Getty Images

As a collective, the mighty men and women of the Azov regiment attained near-mythical status in the eyes of the public for holding the Russian army at bay in Mariupol while holed up in an underground steel plant for weeks. With their brave exploits playing out in real time amidst a relentless siege by Russia, a common criticism came to the forefront.

The Azov stood accused of being Nazis, of being anti-Semitic nationalists, and of hating the LGBTQ community.

Related: What can you do when the Russian propaganda machine targets you? I found out the hard way

In light of the recent mass shooting in Buffalo where a white supremacist terrorist was seen to have invoked similar imagery to the Azov, both their accusers and defenders felt it necessary to parse the group’s insignia for meaning, look at words spoken over the last decade, to speculate on the members’ actions and intent. The battalion’s special forces patch included a German medieval symbol that was adopted by the Nazis.

While the group had used the insignia since 2014, it has been used as “proof” for false Russian allegations that Ukraine was run by Nazis. Ukraine’s president is Jewish.

However, as controversy swirled about them, and Russian forces advanced, these proud warriors were humbled by the support they got from one particular organization: the LGBTQ group, UKRAINEPRIDE.

During the earliest days of the newest chapter in a now eight-year war between Russia and Ukraine, UKRAINEPRIDE felt called to honor the many LGBTQ soldiers serving in the Ukrainian Armed Forces by raising money for any military group that needed financial assistance. Soon, among those who came calling on the nation’s eponymous Pride organization for help was the Azov.

According to EuroNews, the fabled fighters “expected to be ‘cancelled’ by the organization,” due to their conservative beliefs and didn’t anticipate their request being fulfilled.

Eventually, the Azov received over $10,000, a donation which they put toward communications equipment.

In speaking to Vogue Ukraine about the gift, Sofia Lapina a member of UKRAINEPRIDE made it clear that the LGBTQ community in Ukraine was not in conflict with the Azov, saying, “We have never had direct conflicts with representatives of the regiment. In recent years, Azov has not been among those who attack LGBTQ people.”

Going further, Lapina assigned blame on Russia for disparaging the reputation of the Azov and making up lies over their alleged anti-LGBTQ behavior, with Russian actors being the actual perpetrators of hate against the broader queer community.

“This is being done by other Russian-sponsored radical groups. It is to visualize pro-Russian propaganda about so-called ‘Ukrainian neo-Nazism’.”

In an interview, Yulia Fedosyuk, the wife of an Azov soldier, also confronted the rumors of Azov intolerance against gays and lesbians.

“I, my husband Arseniy, and many Azov soldiers are conservatives, but none of us have ever supported violence against members of the LGBTQ community,” she told LGBTQ Nation.

She explained where the seeds of negativity about the Azov were sown.

“I am grateful to the organization for its financial assistance, as the regiment’s reputation, which has been built over the years by architects of Russian propaganda in the Western media, is, to put it mildly, untrue. “

Lapina is not the only LGBTQ defender of the Azov.

LGBTQ Nation spoke directly with multiple queer-identifying people who are familiar with the controversies surrounding the Azov’s interactions with those who fall under the LGBTQ umbrella.

On record, and on background, statements ranged from effusive praise to grudging respect.

“They are not Nazis of Ukraine, they are patriots of the country,” they said.

“I’m sure our people are all leaning towards the left, in all the ways,” Eugene from Rivne wrote when asked about the political leanings of the Azov, before admitting to being biased toward the patriots who serve his country.

Artur stated that they are “very well received,” and Kirill acknowledged that while he didn’t agree with them on everything, those who wore the Azov emblem “are necessary to win the war.”

One gender non-conforming leader of a large activist network in Ukraine was circumspect in their answer, stating that while their reputation was problematic in many ways, they had not seen or heard of any direct links between the Azov and intimidation of queers.

A feminist lesbian, who leads a national humanitarian organization, expressed gratitude to the Azov for what they had done in defense of Ukraine.

After Rep. Marjorie Taylor Greene (R-GA) alluded to the Azov in a tweet meshing the Pride flag with the blue and yellow colors of Ukraine’s flag, asking “Do the Nazis in the Ukrainian army know?”, LGBTQ Nation reached out to several people with close ties to the Azov, and while some refused to comment, one person, who served with the Azov in 2014 and works with them today answered simply, it means “LGBT.” It didn’t cause any consternation like Greene had implied that it would.

While there has been at least one instance of Azov symbols being present during an attack against gays, at a 2016 movie screening, those present were never identified as actually being members of the highly selective cohort.

Furthermore, according to BuzzFeed News, in 2019 and 2020 when queer-hating, American neo-Nazis came to Ukraine to try and join the Azov without invitations and without going through, “official channels,” they were summarily expelled and banned from the nation.

Much of the discussion surrounding the regiment has simmered down since the mass evacuation of many of its members from the Azovstal plant in late May. In the middle of March and yet again a few days ago, members of the Kharkiv branch of the Azov were sported with modern insignia on their uniforms, patches befitting their position as the modern, forward-facing beacons of hope and heroism that the Ukrainian LGBTQ community proclaims them to be.

The wolfsangel symbol had been replaced with the golden trident national symbol used by other military forces in the country.

Democrats celebrate beginning of Pride month. Republicans? Not so much