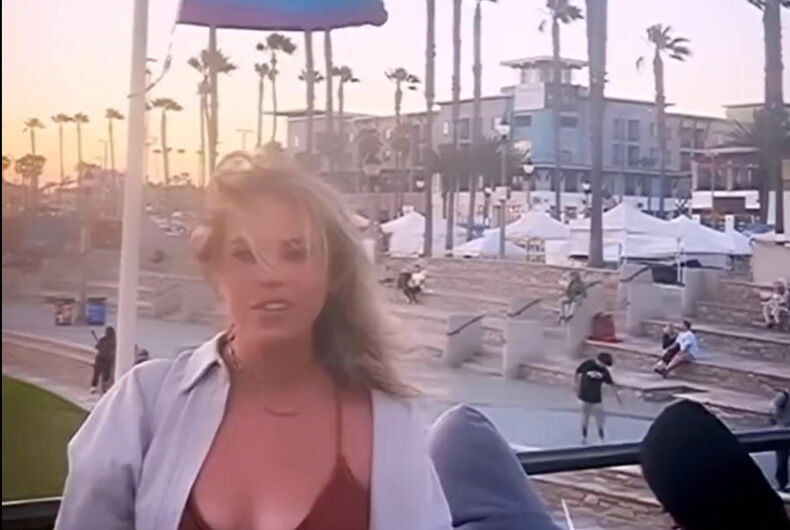 One America News (OAN) anchor Alison Steinberg posted a profanity-filled rant over the weekend sparked by a Pride flag. Steinberg was so incensed by the sight of the rainbow flag flying alongside the American flag in the beachfront business district of Huntington Beach, California that she appeared to have lost control.

“Guess what I came home to be greeted with? This fucking bulls**t,” she says, pointing to the Pride flag. “What the hell is that?”

Steinberg went on to attempt to connect the flag with the town’s response to the COVID-19 pandemic.

“Huntington Beach is the town of good old-fashioned hard-working American people. People who worked all through the COVID lockdown!” she shouts to the camera.

“Yes, that’s right. Huntington Beach never shut down through any of the COVID nonsense fuckery. And now we’re peddling this garbage?”

“What the hell is this?” Steinberg continued. “The only flag that should be up there is that American flag. This is a disgrace to our city and it should be taken down immediately. Whoever the hell is running this town needs to be fired. Make America great again. Make Huntington Beach great.”

City Council voted 6-0 to fly the flag and recognize June as LGBTQ Pride Month. City staff also raised the LGBTQ Pride flag at the Huntington Beach Pier, the Central Library and the Senior Center at Central Park. Thank you, HB! (Maybe Alison should have stayed away a bit longer?)

So she’s a dipshit AND a daydrunk? Fun.

Some parts, mostly very large counties, but definitely not all of CA. Orange County is very conservative and Huntington Beach is basically the white supremacy capital.

San Francisco Pride erupts in chaos as someone maces crowd