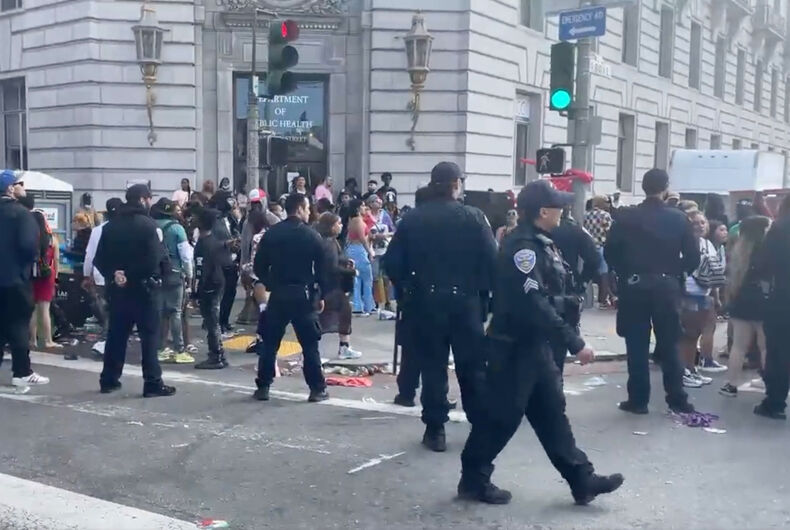 San Francisco’s Pride festivities were cut short on Sunday when someone sprayed mace into the crowd, causing momentary panic. The incident occurred around 5:30 p.m. in the city’s Civic Center where the annual Pride Festival was taking place. Rumors of an active shooter spread quickly and fights broke out among those fleeing the scene.

“Everyone was panicked. Everyone was screaming but like nobody really knew what was going on at first, so I was kind of like why is everyone scared?’ and then I just heard, ‘gun, gun, gun,’” Zen Williams tells NBC Bay Area.

BREAKING: @SFPD says reports of an active shooting at #SFPride celebrations appear to be “without merit” at this time. There were reports of a shooting but officials say they were “unable to locate an victims or witnesses”. Here’s video of the panic that ensued @abc7newsbayarea https://t.co/KmKWNkA9zu

Police officers were unable to locate any victims or witnesses and say that reports of an active shooter were likely false. However, multiple fights reportedly broke out as people fled the scene.

Here’s video of one of the fights that broke out during SF’s #PrideEvent pic.twitter.com/nYU3dD4365

San Francisco Pride posted a statement addressing Sunday’s events later in the evening. “There was an incident near the Kaiser Permanente main stage where there was reason for concern,” the statement reads. “As announced from the stage at the time, it was a person spraying mace into the crowd. Although no one was harmed, we know it was not a pleasant experience. We decided to cut the performance short in the interest of safety.”