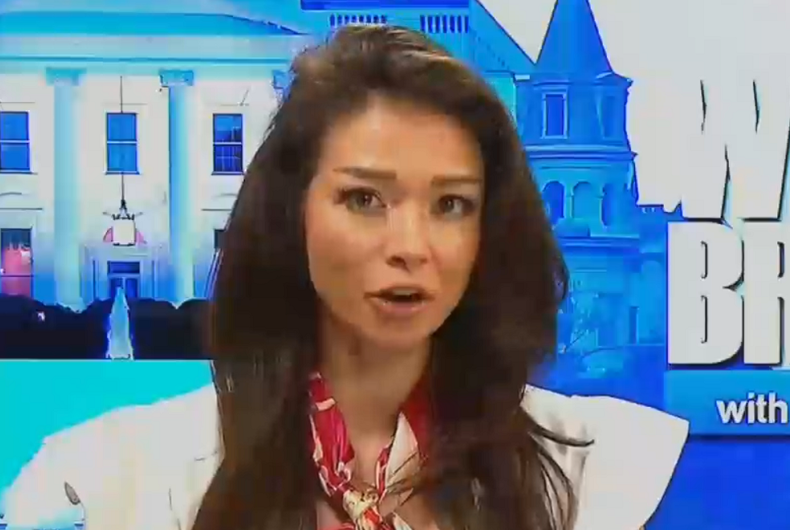 A conservative television host called President Joe Biden the “Groomer-in-Chief” because of his support for LGBTQ equality, saying that no one would “feel sorry for old Joe” because “everyone gets old, even perverts.”

For the past month, conservative pundits and Republican politicians have been calling LGBTQ people pedophiles and groomers, arguing that being open about one’s identity in the presence of young people is the equivalent of sexual abuse.

So it was only a matter of time before they would target President Joe Biden with the same slur, given how he is the first president to enter the White House supporting marriage equality and the first whose administration declared that trans rights are human rights.

One America News (OAN) host Chanel Rion referred to “trans activists pushing gender mutilation on children,” even though gender affirming surgery is not performed on minors, and said that they are “aiding and abetting in crimes against humanity” and the trans rights movement “belongs in the eternal flames of Hell.”

Then she turned to Biden, asking why he “would support such a radical agenda.” She said that others might think that Biden is “just following orders” from former President Barack Obama and Rep. Alexandria Ocasio-Cortez (D-NY) – although she didn’t say why Biden would be taking orders from people who have no power over him – but Rion insisted that this is an issue that Biden himself is very much invested in.

Because he’s a “bona fide creep, a class A pervert.”

“Everyone gets old, even perverts,” Rion said. “Spare him your ounce of sympathy.” She brought up Tara Reade, who accused Biden of sexual assault during the 2020 presidential campaign. Rion did not mention how Reade was caught lying about her professional credentials in court in order to testify in criminal cases.

She also brought up a diary that was allegedly stolen from Biden’s daughter Ashley Biden that has been the source of many rightwing conspiracy theories about the Bidens.

Rion brought up how the Biden administration is opposed to transgender medical bans, discussing the Department of Justice’s letter warning states that banning access to gender affirming care violates federal law and the Constitution, a position that transgender kids and their families are arguing in multiple court cases.

“But the ‘Jeffrey Epstein killed himself’ pro-pedophile media fully backs this pro-grooming position,” Rion said, referring to conspiracy theories that started after the NYC medical examiner determined that Epstein died by suicide when he hanged himself in August 2019.

“Their true motive… is about satisfying their own warped perversions,” Rion concluded. “And if you want to take it a layer deeper, it’s about canceling reproduction. This is population control. Sterilize your children, abort your babies, discourage nuclear families, and encourage non-reproducing unions.”