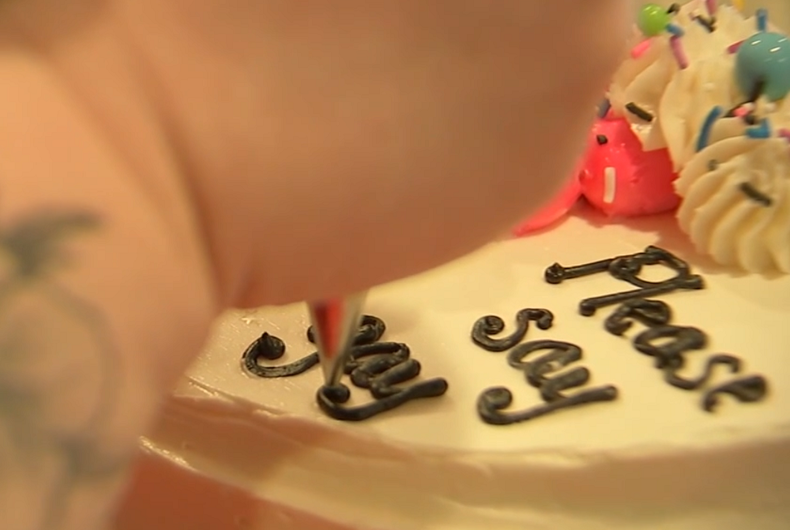 A new Don’t Say Gay bill passed the North Carolina Senate on Wednesday after it was introduced by Republicans on the first day of Pride Month.

H.B. 755, a “Parents’ Bill of Rights” modeled on Florida’s infamous Don’t Say Gay legislation, would regulate classroom instruction about LGBTQ issues and require schools to inform parents if their children request to be called by different pronouns. The bill is expected to pass the Republican-led House but get vetoed by Democratic Gov. Roy Cooper.

The bill has one local resident fighting back — with cake.

“All this hate mongering really has me angry. It’s hard to talk about. I’m really in disbelief and I really wanted to do something that spoke back to them,” said Matt Bumpas, the owner of Sweet Bumpas Cakes, a Durham-based home bakery.

So Bumpas got in the kitchen and came up with a clap back: the Please Say Gay Cake.

“I started baking the cakes and posted on Instagram and within an hour orders started coming in.”

“Bringing #HB755 to a vote on the first day of #Pride Month makes clear this bill is little more than an act of legislative bullying of #LGBTQ people,” Carrboro Mayor Damon Seils said in a tweet on Wednesday.

Bringing #HB755 to a vote on the first day of #Pride Month makes clear this bill is little more than an act of legislative bullying of #LGBTQ people. Follow @equalitync for updates and information about how to respond. https://t.co/DUH6IX2nIx

“It’s silencing gay voices,” says Bumpas. “It’s silencing our allies who speak up for us and recognize we contribute to North Carolina and our communities just as much as any other family. I wanted to send the message of yes, please say gay.”

For the chef’s right hand in the kitchen, Nichole Anderson, it’s personal. Her 17-year-old son Logan is transgender.

Anderson fears the bill could out students who consider school a safe space. “Where does that create the safety and say it’s OK to be yourself? It doesn’t. It concerns me that the suicide rate will go back up.”

Bumpas plans to sell his sweet cakes through Pride Month, with a percentage of sales going to the LGBTQ Center in Durham. “I started getting emails from parents thanking me for doing this. Emails from other people in the community.”

“Schools are grateful for involved parents, and we need even more of them working together with teachers to educate our children,” Gov. Cooper said in a statement on Wednesday. “However, the last thing our state needs is another Republican political ploy like the bathroom bill which hurt our people and cost us jobs, so let’s keep the ‘Don’t Say Gay’ culture wars out of North Carolina classrooms.”

The so-called bathroom bill was enacted in 2016 and required transgender people to use public restrooms in schools and government buildings that matched the gender on their birth certificates. That bill was partially repealed in 2017 after a major backlash.

This week in LGBTQ Twitter: Drag queens vs The Children