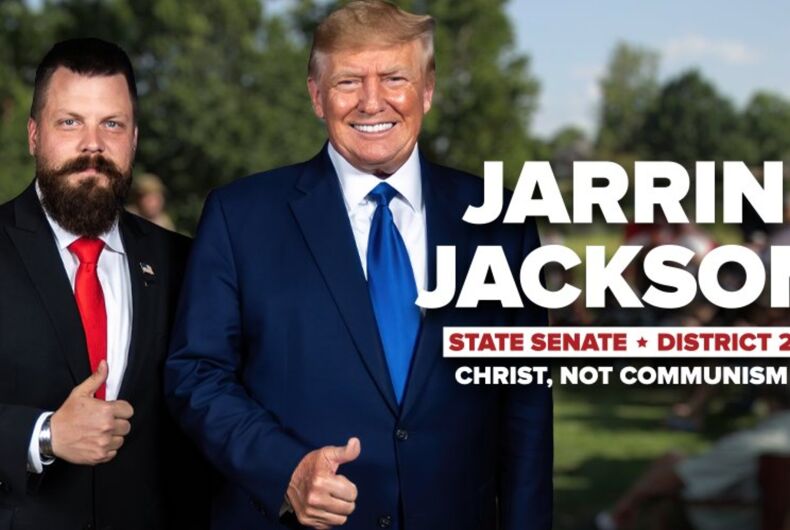 It’s a match made in ultra-MAGA heaven.

“I endorse @JarrinJackson for State Senate in Oklahoma,” Rogers tweeted Monday. “Jarrin Jackson is a strong proponent of forensic audits… will secure our borders, protect our guns and defend children from the evil groomers.”

I endorse @JarrinJackson for State Senate in Oklahoma. Oklahoma is a deep red state and needs a fighter like Jarrin in office. Jarrin is a West Point graduate and an Afghanistan combat veteran. As a former infantry officer, he has the mentality for what is needed in (1/3) pic.twitter.com/W9Suq9Oaqp

Jackson, who describes himself as an “American Patriot, saved by the precious blood of Jesus Christ,” recently ranted about Pride Month in a video post: “Straight dudes find it disgusting whenever they see other dudes kissing. It is gross. Being gay is gay. It’s the most disgusting, despicable, stupid thing ever.”

Christian nationalist Oklahoma GOP state senate candidate Jarrin Jackson is not a fan of Pride Month: "Straight dudes find it disgusting whenever they see other dudes kissing. It is gross. Being gay is gay. It's the most disgusting, despicable, stupid, 🤮 thing ever." https://t.co/X3HMQmRBrp pic.twitter.com/7mvaQncmad

The first-term state senator proposed a bill to prohibit medical procedures that affirm gender identity for trans children. Health professionals would face a Class 4 felony mandating prison time. Another bill would require school employees to out transgender youth to their parents and ban health professionals from prescribing puberty blockers for them. A third bill introduced by Rogers would ban transgender girls from participating in school sports.

Rogers has also suggested we start calling Superman “Thooperman” – a gay lisp joke – when Clark Kent’s son was depicted as bisexual in a comic book.

Jackson was quick to celebrate the endorsement.

“Thank you, Senator Rogers. It is a true honor to have your endorsement. Nobody fights harder for #ElectionIntegrity. You inspire me. Amen.”

Thank you, Senator Rogers. It is a true honor to have your endorsement. Nobody fights harder for #ElectionIntegrity. You inspire me. Amen. @WendyRogersAZ https://t.co/qL8n1j1Hei

Jackson grabbed headlines in March when he shot up a printer disguised as a Dominion voting machine for a campaign ad. The machines have been central to election conspiracy theories.

Oklahoma state Senate candidate Jarrin Jackson pretends an old printer is a Dominion voting machine and shoots it up because 'Merica (Allow us to stress that this IS NOT a parody.) https://t.co/Rz3Vp4Ro5f pic.twitter.com/ckiJieisXH

This is Jackson’s third run for office. In 2016 and 2018, he ran in Oklahoma’s 2nd Congressional District for the U.S. House of Representatives, but lost both Republican primaries.

The Army vet and sometime pastor regularly rails against “Godless commies” and says he wants to “shoot them in the face.” Military tribunals should send communists to “burn forever in a lake of fire.”

Oklahoma has produced some of the most vociferously anti-LGBTQ Republican politicians in the nation. Gov. Kevin Stitt (R) signed a law last month that bans transgender girls from participating in school sports while surrounded by cisgender girls as a trans woman stood outside his office protesting.

Slavery was so long ago… What good will reparations do now?