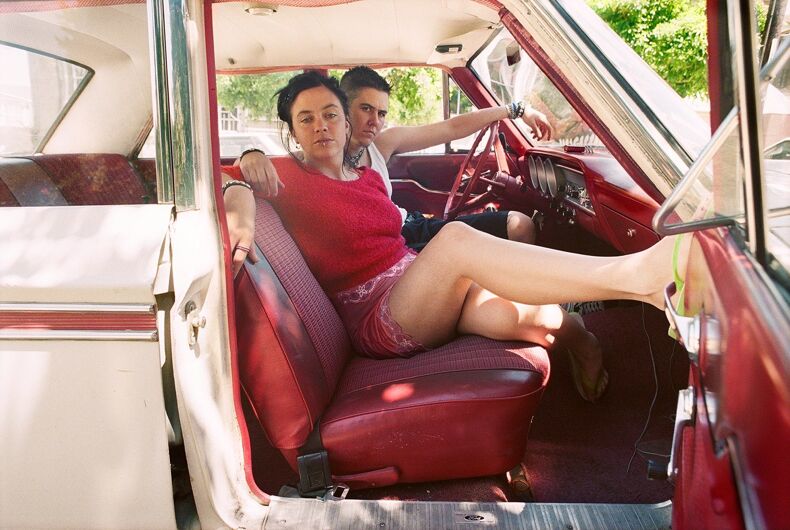 It’s no surprise Steffan Schlarb and Brandon Romer, co-founders of Schlomer Haus Gallery, were drawn to the work of Chloe Sherman — or to her Instagram feed at first.

“Outsiders are forced to look at the world a different way, from a different vantage point,” explains Schlarb. “It’s about revealing something — another layer.”

Related: LGBTQ life is thriving in Ukraine thanks to the arts

“We do a lot of research on Instagram and we came across Chloe’s work and knew we wanted to show it,” explains Romer.

During the early 90s, fine art photographer Sherman began documenting a generation of young, self-identified queers in San Francisco, capturing their collective creativity, pride, and strident defiance of cultural norms. Her photography reflects a nuanced view of an evolving community.

Sherman arrived in San Francisco in 1992. She was accepted to the San Francisco Art Institute where she earned a degree in fine art photography. Here her career and her community became uniquely intertwined.

The result:  an incredibly vast body of work focused on a small slice of community at a very specific time and place with a clear sense of purpose.

“I always intended to show a wider public an inside view — to expose resilience, tenderness, and joy of a burgeoning scene,” Sherman told LGBTQ Nation.

Sherman’s photography not only introduces the viewer to a group of uniquely San Francisco queers during the 1990s but offers a glimpse of the freedom and flamboyance of hopeful, fashionable young people during a pivotal time in history.  A time when butch/femme culture thrived, gender-bending was the norm, and community was everything. Sherman found beauty, grace, and bravery in this subculture that forged an identity alongside mainstream society.

A queer cultural renaissance was unfolding as youth, outcasts, artists, and free spirits flocked to the city to find one another.  People could show up, join forces, make new rules, work little, and live free. There was a sense of “come as you are and let’s celebrate that.”

Sherman hasn’t exhibited these photographs anywhere in more than 20 years. And now, she sees them as more than just her artwork and edited images: they are an important slice of history.

“I think we always knew it was a special place and time. But looking back, it was a closer step, the tip of the iceberg of LGBTQ acceptance and rights,” she said.

Sherman’s photographs of this era offer visibility to the city’s pulse during this unique time of unapologetic celebration of difference and homecoming.

This was before gay marriage, gays in the military, LGBTQ representation in Hollywood, and politics. It was before Mayor Pete, Laverne Cox, and Lil Nas X.

“There was a need for communal support in a big way,” Sherman said. “Reviewing all of these photos has just reiterated what a pivotal, groundbreaking time it was.”

She has named the show, RENEGADE San Francisco: the 1990s to reflect the revolutionary attitudes and actions of the people in the photos and a community that was forging their own way off the beaten path. The solo show features 36 photographic prints all shot with 35mm film. She is also working on a book to showcase a much wider selection of images.

You can see the photos yourself, beginning June 17 at Schlomer Haus Gallery in San Francisco. Limited edition photographic prints are being sold and can also be purchased online.