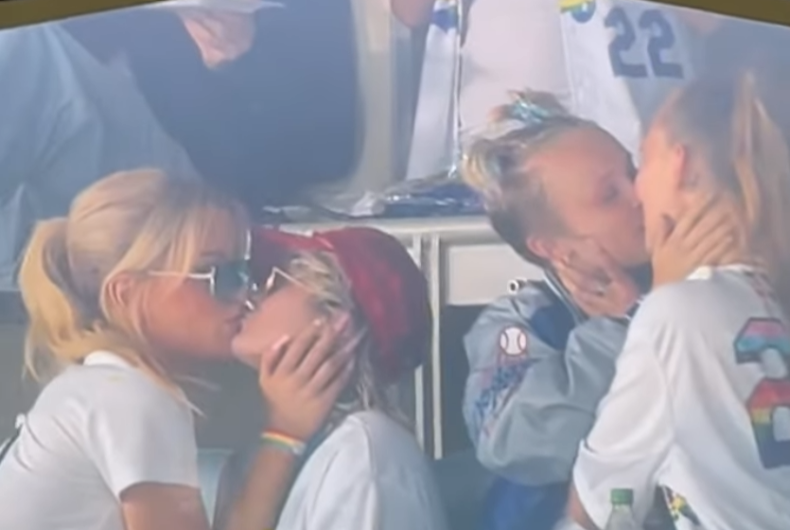 JoJo Siwa and Gigi Gorgeous and their significant others were caught on the kiss cam at Dodger StadiumPhoto: Screenshot

Video shared online by beauty YouTuber Gigi Gorgeous – who as attending the Dodgers-Mets game in Los Angeles last Friday with her spouse Nats Getty, Siwa, and Prew – shows the camera found the four of them. When they saw that they were on camera, the couples started kissing, a celebration on the annual LGBTQ Night at Dodger Stadium

“Caught on kiss came with @itsjojosiwa oopsies,” Gigi Gorgeous wrote when posting the video to Instagram.

Siwa came out as gay in early 2021 and has since been a vocal LGBTQ advocate. Her coming out has been considered massively influential for today’s youth due to the massive size of her fan base. To date, Siwa has garnered over 12 million subscribers on YouTube alone.

She also became part of the first ever same-sex pair on season 30 of Dancing with the Stars, ABC’s popular and long-running dance competition show.

“It’s really special that not only now do I get to share with the world that you get to love who you want to love, but also you get a dance with whom you want to dance,” she told Variety when the news broke.

Siwa confirmed last month that she and ex-girlfriend Prew were back together.

“If you love something let it go, if it comes back….🤍♾,” she captioned an Instagram post with a picture of them hugging at Disney World last month.

Lance Bass was “terrified” his parents would reject him if he came out. He prayed to turn straight.