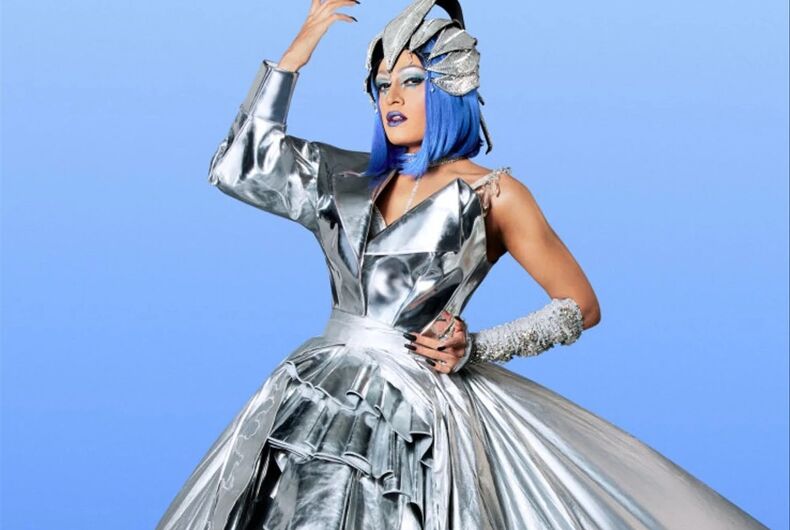 Wearing a rainbow wig, a matching saree, and accompanied by a majari (a tambourine-like instrument), Patruni Chidananda Sastry, who goes by the stage name S.A.S for Suffocated Art Specimen, opens a drag show in Telugu.

“Idi Pride maasam, anna,” their voice echoes. “It is the Pride Month, brother.”

Related: Going to your first drag show? Here’s what you absolutely need to know

Sastry works in a software company during the day but transforms into S.A.S in the evening. They are at the forefront of a growing political and social movement in India.

Drag performances associated with LGBTQ people began in the 1970s in the US as an underground subculture of queer and trans people. By 2009, the first season of Ru Paul’s Drag Race had aired and drag had beamed directly into America’s living rooms.

Pushpesh Kumar, a Professor of Sociology at the University of Hyderabad who researches gender and sexuality, says that drag in its current form only became visible in India after 2014 when the Supreme Court of India recognized transgender individuals as citizens and extended full constitutional rights to them. Four years later, in another landmark judgment, the Supreme Court formally decriminalized consensual homosexuality in India.

Therefore, Kumar says, there is a difference in the context in which the underground drag subculture of the US emerged and the contemporary rise of drag in India; while the former emerged in a largely homophobic and transphobic environment, the latter is emerging in an environment where some civil rights have already been extended to queer and trans individuals.

However, while drag as Americans know it may have only existed for a decade in India, the history of gender subversion goes long back.

While a thorough account of gender-subversive practices in India is missing, gender and sexual non-conformity “were always there and never subjected to legal regulations until India was subjected to a colonial governance,” Kumar told LGBTQ Nation.

Sastry agrees. Trained in Indian classical dance, they mentioned the Natya Shastra, an ancient Hindu treatise on dance compiled between 500 BCE and 500 CE. In the Natya Shastra, Sastry says, the are mentions of different performative practices that were not limited by the performer’s sex or gender. For example, Sastry spoke about Rupanurupam – “impersonation”, as they translate it.

In fact, Indian classical dance forms like Kuchipudi and Kathakali were traditionally performed by only men, who would take on both feminine and masculine roles as per the needs of the performance.

The idea of subverting traditional gender roles is also prevalent in several indigenous and folk performative practices in India and is also marked by social hierarchies like caste. For example, Launda Naach, a folk dance common in Bihar and Uttar Pradesh and often practiced by people from marginalized-caste backgrounds, involves men performing elaborate dance-dramas dressed in feminine attire.

So, what distinguishes the forms of drag that have been on the rise in the last decade – what Sastry terms “Neo-drag” in the context of India – and the traditional gender subversive performative practices in India? According to Kumar, it is who the performers are, where they come from, and who watches them perform.

The question of who the audience is becomes important when one looks at the content of contemporary drag performances vis-a-vis that of traditional gender-subversive practices. While contemporary drag performers tend to perform to mainstream Bollywood – or even Hollywood – numbers, traditional and indigenous performers stick to “folk songs specific to the social context,” says Kumar.

It is the Pride Month, brother,

Let me sensitize you a bit –

Gay Consumer Culture and the Drag Epicenters of India

One of the six people who sued to legalize homosexuality was the hotelier Keshav Suri, the youngest executive director of the Lalit Suri Hospitality Group.

Under Suri’s leadership, the company opened a new chain of nightclubs, called the Kitty Su, in Delhi, Mumbai, Bangalore, Chandigarh and Kolkata.

Kitty Su soon became a space where drag performances became commonplace. And while Kitty Su might be credited for nurturing and publicizing drag in India, its dominance over the drag scene in India might indicate certain problems, say Kumar and Sastry.

“Kitty Su has created a pocket of groupism in the Indian drag scene, where a certain elitist drag is being presented to an elite audience,” Sastry said. “I wear a saree because that is the only affordable piece of clothing I can invest in,” they said.

“Some elite drag queens have continuous access to spaces like Kitty Su, which means they can both practice their art and make money out of it. Some of us just don’t have that space,” Sastry added.

Kumar links this to what he calls the “gay consumer culture.” According to him, it is possible that “Keshav Suri encourages drag for profit and commerce”.

Further, according to Sastry, spaces like Kitty Su majorly only platform drag performers whose performances are acceptable to an elite urban audience and do not raise critical questions about the political or social concerns of gender- and sexually marginalised people in India.

“There are many wonderful drag performers who are doing upfront political work. However, they never get access to these spaces,” said Sastri. “There is a clear disparity between what is being presented as mainstream drag in India and the several forms of drag that are actually evolving in the country,” they added.

Kumar told LGBTQ Nation, “drag may be a career without politics for the majority [of performers].” That said, Kumar added, Sastry might be one of the few trying to politicize their performances.

Sastry has chosen to politicize their drag performance both in form and content. The form, they say, is tranimal drag, where “stereotypical notions of beauty are constantly challenged.”

In 2019, when Sastry started publicly performing drag, they decided they would “like to be somebody who’s not beautiful by stereotypical standards.”

“I created a look which was purposefully sort-of ‘ugly’ and not niche,” they said.

It wasn’t easy. After their initial performances, several people compared them with traditional drag performers.

“I was told that this is some kind of performance, but not drag,” they told LGBTQ Nation.

Now with an evergrowing audience and greater acceptance for their twist on drag, they’re at the forefront of a move to politicize drag for the masses.

In a recent performance, Sastry spoke about the rising fascism of the current Indian government when they sang, “We asked for the rainbow; why did you give us saffron?” (Saffron is the color prominently associated with the current ruling party of India – the Bharatiya Janata Party.)

In the same performance, Sastry added, “We asked for representation; why did you give us pinkwashing?”

According to Kumar, Sastry’s battle may be lonely, but they are certainly not alone. Kumar mentioned Avatari Devi, a drag performer who draws inspiration from Launda Naach. In an Instagram performance, Devi appeared with different vegetables – some green and some orange/saffron. Devi suggested that the audience consume only orange/saffron vegetables and avoid eating the green ones – satirically referring to the growing Islamophobia in the country.

The Future of Drag in India

Kumar is hopeful that social and political awareness within the Indian drag subculture will continue to grow. Meanwhile, Sastry and other drag performers claim that the subculture is making slow but steady progress both in terms of its politics and its popularity.

The drag scene is also seeing a diversity of performers. Neeti Ravindra, for instance, is a medical student who has begun performing as a drag king. They performed alongside two more drag kings in a recent drag king show in Hyderabad, the first of its kind in the city.

“I want drag to go everywhere. I want it to be seen as a pure form of expression because people are their authentic selves here. I want drag to be in every cultural event, every festival, theater, and school,” Ravindra told LGBTQ Nation.

“I just want it to be everywhere.”

The writer acknowledges Patruni Chidananda Sastry for translating some of their Telugu songs in English.