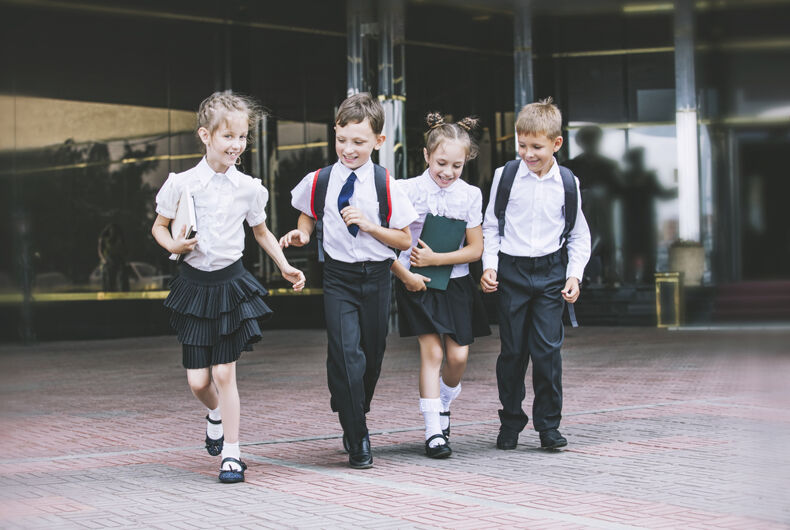 A federal appeals court has just made it harder for charter schools to justify having separate dress codes for boys and girls, ruling that a school in North Carolina that required girls to wear skirts violated their constitutional right to equal protection.

The case was brought by mother Bonnie Peltier against the Charter Day School in Leland. She said that she enrolled her two kids – her son and her daughter – and noticed that their uniform requirements were different. Her son was allowed to wear pants while her kindergartener daughter was required to wear a skirt.

Related: Pete Buttigieg warns the Supreme Court won’t stop at ending the right to an abortion

She questioned the policy and argued with the school that it would be harder for her daughter to move and play if she had to wear a skirt.

But the school’s response shocked her. School founder Baker Mitchell said that the uniform policy was there “to preserve chivalry and respect among young women and men” so that kids would learn that “women are regarded as a fragile vessel that men are supposed to take care of and honor.”

With help from the ACLU, she and several other parents sued. And the Court of Appeals for the Fourth Circuit agreed with the parents, saying that publicly funded charter schools are state actors and have to follow many of the same rules as traditional public schools.

“It is difficult to imagine a clearer example of a rationale based on impermissible gender stereotypes,” Judge Barbara Milano Keenan wrote for the majority.

“I’m glad the girls at Charter Day School will now be able to learn, move, and play on equal terms as the boys in school,” Peltier said in a statement. “In 2022, girls shouldn’t have to decide between wearing something that makes them uncomfortable or missing classroom instruction time.”

The court in the dress code case rejected the school’s argument that their dress code doesn’t violate the girls’ equal protection rights since it burdens both boys and girls equally, citing the 2020 landmark LGBTQ Supreme Court decision in Bostock v. Clayton Co., where the Court ruled that Title VII’s ban on discrimination because of sex also bans discrimination against LGBTQ people since it’s impossible to discriminate against LGBTQ people without taking sex into account.

“So an employer who fires a woman, Hannah, because she is insufficiently feminine and also fires a man, Bob, for being insufficiently masculine may treat men and women as groups more or less equally,” the Bostock decision said.

Judge Milano Keenan applied that logic to the dress code case and said that the school doesn’t eliminate sexism when it has separate gendered dress codes, it “doubles it.”

While gendered dress codes in publicly funded schools may seem like a thing of the past, students are still fighting to be treated the same at school.

In 2020, a gay teen in Texas, Trevor Wilkinson, made national headlines when he was suspended from his public school for wearing nail polish. The school pointed to its dress code, which banned male students – but not female students – from wearing makeup or nail polish.

Instead of taking it off, Wilkinson fought his district.

“This isn’t about me anymore,” he told a school board meeting. “It’s about a discriminatory, sexist policy that needs to be changed.”

The school district eventually changed its policy and removed gendered rules in the dress code.

Disney won’t send 2000 high-paying jobs to Florida this year. Is it because of “Don’t Say Gay”?